What should I do to level an uneven floor with a potential load bearing wall above?

I'm trying to level the first floor in my 90 year old house. 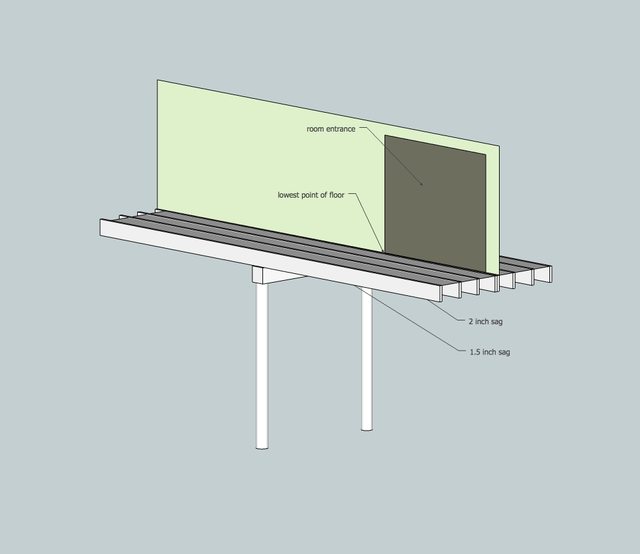 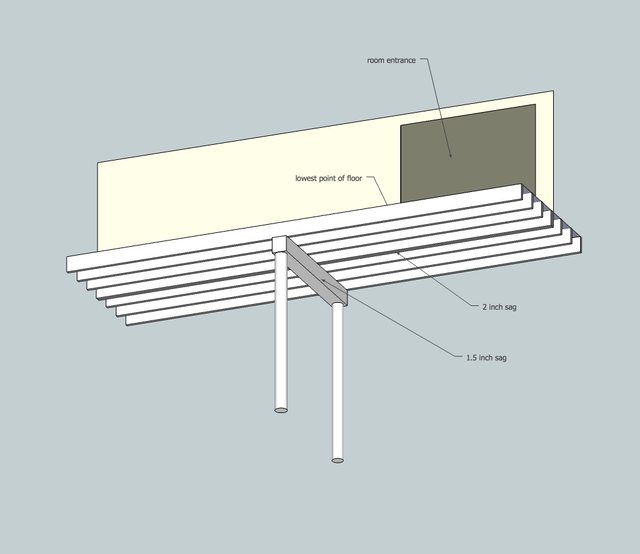 The first floor has a very noticeable sag that seems to be worst at one side of an entryway cut into the first floor wall (indicated in the images below). There aren't any cracks in the walls, but some stone tiles near the front door and near the fireplace, which happen to be near the point where the floor starts to sag, have cracks. In addition, the second floor bathroom/bathtub is right above this entryway and many of the tiles there have cracked.

I am thinking that I can add a support column to the middle of the beam in the basement. In fact, there's an imprint in the wood from where a previous owner put a jack there. Do you think that would solve the problem? Or, do you think there should be another column underneath the point of maximum sag?

I've had a structural engineer come look at this. He said that there's nothing to worry about, but recommended that I don't place heavy items near this area of the house. I'd rather have peace of mind and a flat floor...

I also want to get someone in to retile the bathroom. Should I get this straightened out (hehe) first?

In general, load bearing walls are placed above and parallel to (with as little offset as possible) the beams below them.

I would span another beam or mini beam parallel to the first one, to support the joists mid span. I would start out with screw jacks (raising a new beam) and some form of force plate over your slab (steel over plywood to support and distribute the bottom of the jacks), and S l o w l y elevate. 2 inches is a lot of movement. This elevation process should be done over months. You may find that stabilization is all that is necessary, (or prudent). If you add 1/2 to 3/4 at your lowest point, you might be happy.

Monitor what is happening at the original beam. You may find a gap developing there.. If that is the case, you may have to raise the original beam slightly or shim the beam to joist connection with tapered shims.

Once you're happy with the final leveling, permanent columns (and footings below them) are the proper conclusion.

Not the answer you're looking for? Browse other questions tagged walls floor level load-bearing or ask your own question.