After several months of trying (without really trying), I finally managed to remove my faulty ceiling LED fixture. I was expecting a standard LED bulb once the beast dismantled, alas not.

I am unable to identify the piece. The LED is encased in some sort of a radiator, and the connection looks like a circular plug used in some laptop charger (with little stoppers to fix it in place). I don't think the ceiling fixation should be included in the product, I just forgot to remove it before taking the photos. 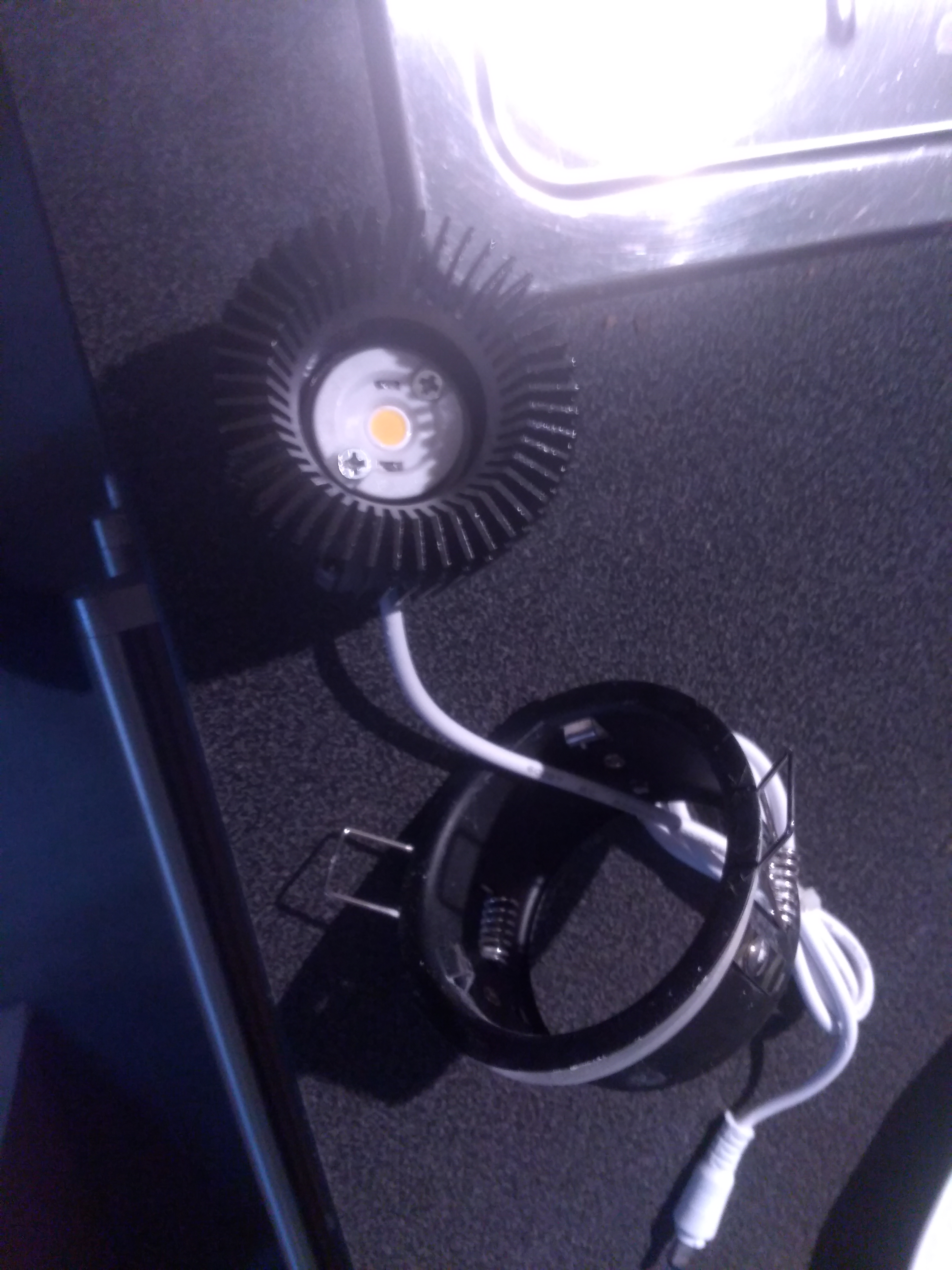 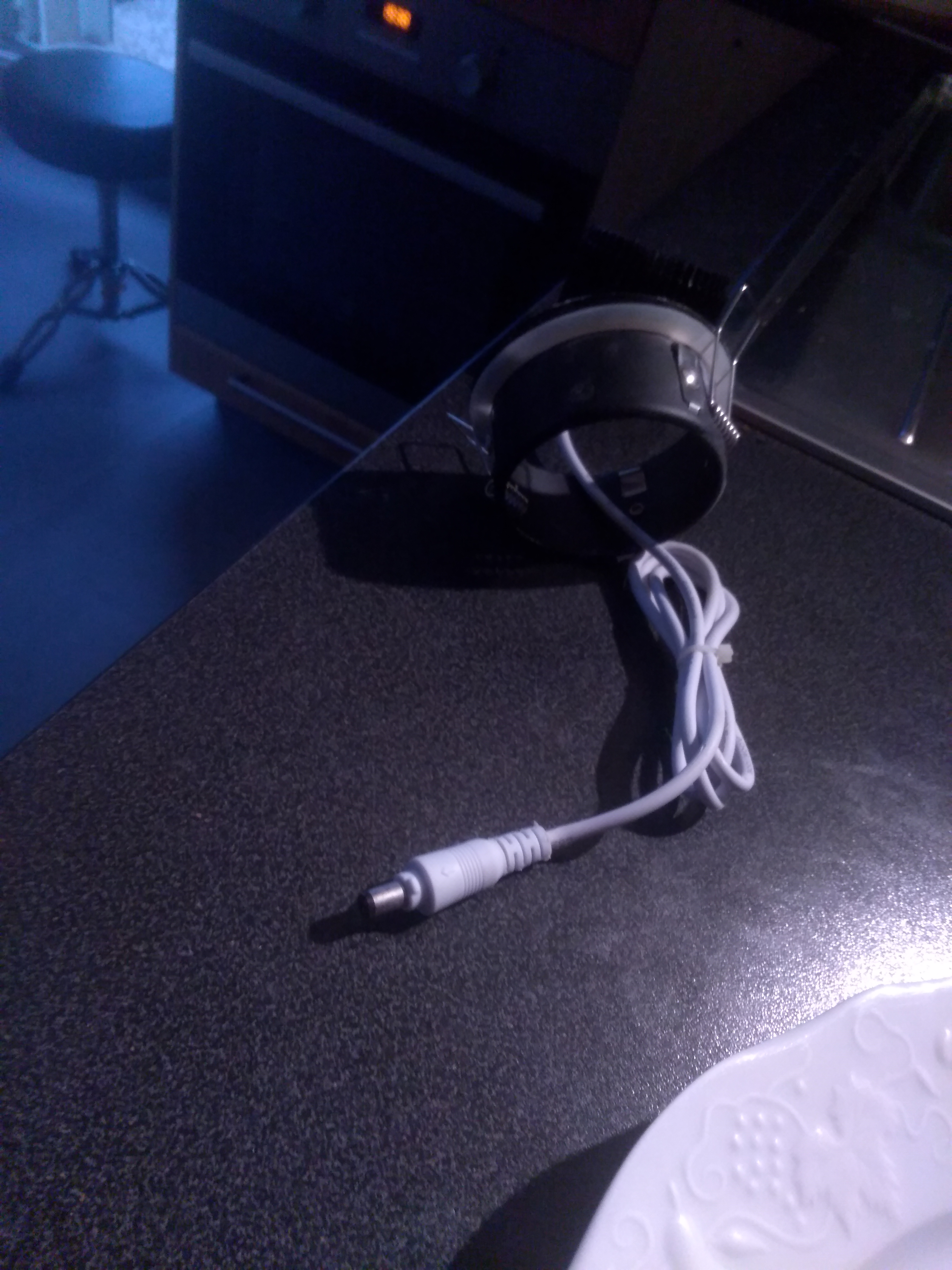 Edit: I don't think I can replace a smaller part than the whole piece. See third photo. 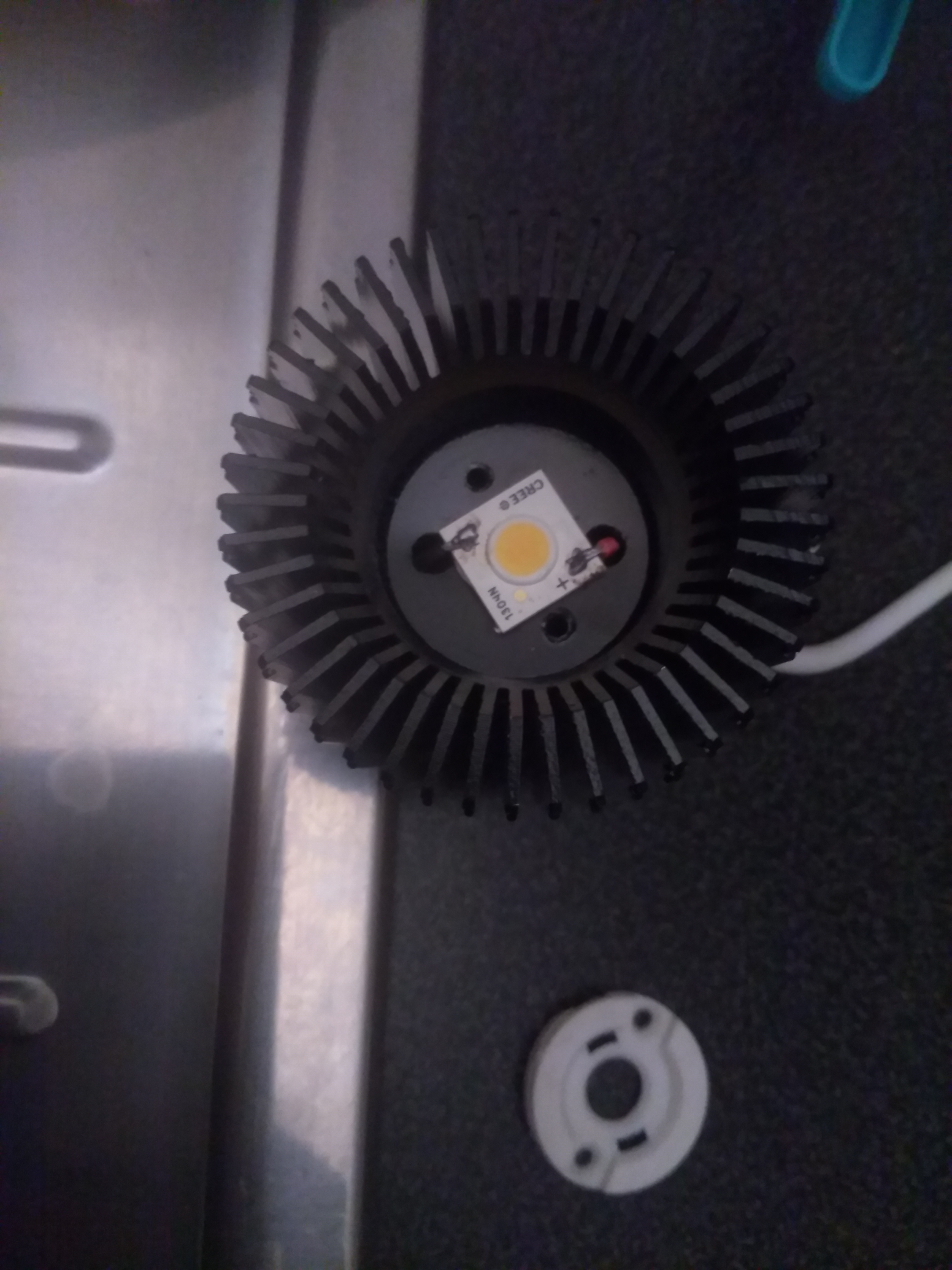 Edit 2: following Harper answer, which I agree with, I forgot to say that I don't think the LED per se is at fault, because the light sometimes lights up when moving the whole when plugged-in. But, my question still stands; if I cannot repair it, how can I identify the whole device and where can I buy a replacement?

Follow up: I pulled the cable from the ceiling, I found a LED power supply (Model KEDH008S0200NR05, converting from 230 V to about 24 V) that emit a very faint alarm when the switch is on. It might be the source of the problem. I am no professional, and my landlord has no idea where to buy this. 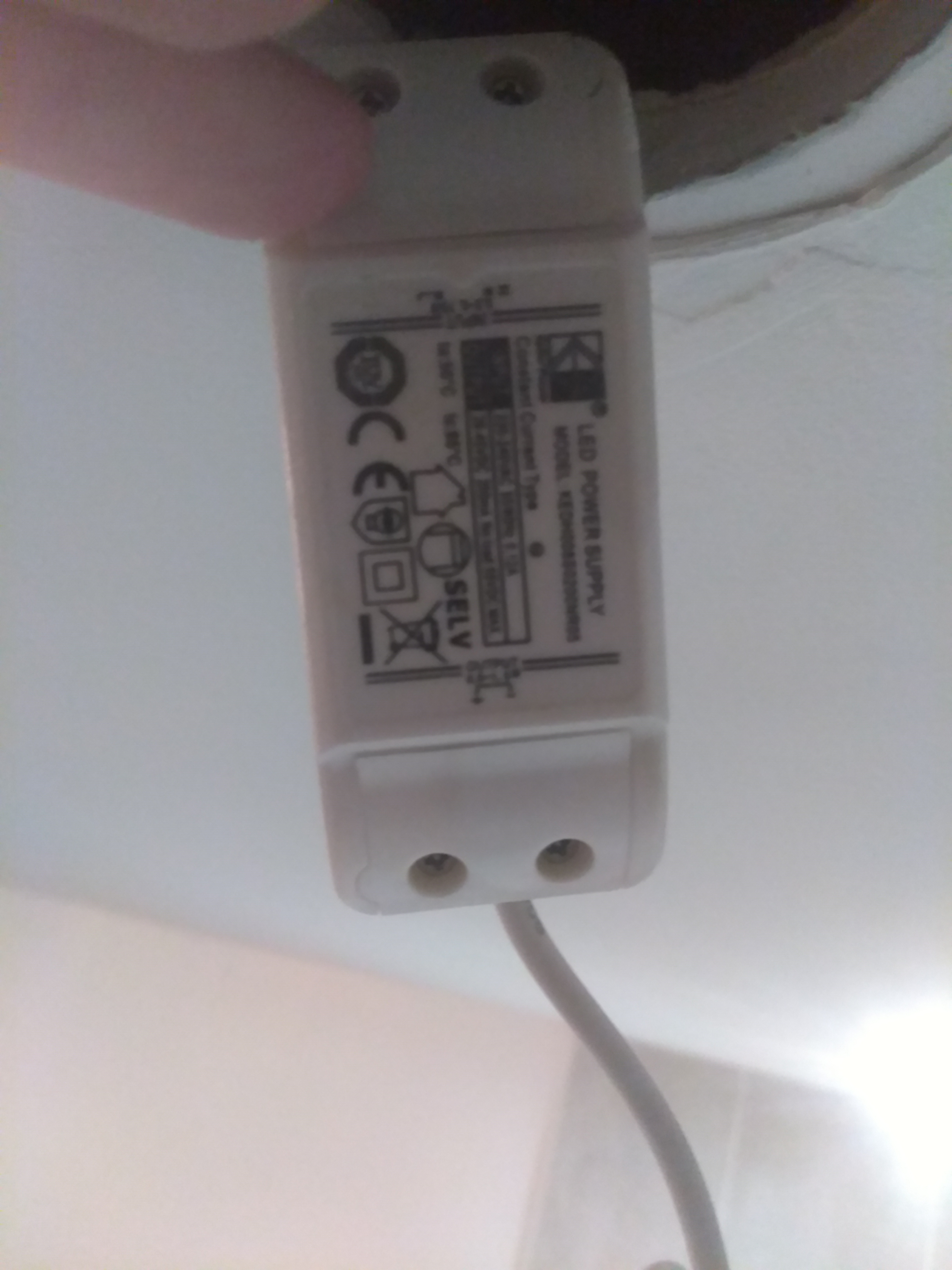 Barking up the wrong tree.

The LED emitter is not defective

Since the beginning of artificial light, the emitting device has been a high-wear item that needs frequent replacement. We've been replacing logs, candles, wicks and bulbs for 10,000 years, so it seems perfectly reasonable that "surely the light emitting thing must be frequently replaced".

You have charged headlong into this project with this assumption on your mind, and have never doubted it or re-examined it.

In similar vein, vacuum tubes in radios once needed frequent replacement. Now, they are replaced by semiconductor transistors that essentially never fail.

That is what has happened with LED. The "light emitting thing" is a semiconductor, and is vanishingly unlikely to fail. Not impossible, but on any light assembly, it's the least likely to fail.

As such, LED light fixtures have no reason to make the 'bulb' replaceable.

The electronic driver, which conditions supply power to the exact current flow needed for the LED, is a different matter. It is full of less reliable parts such as capacitors and Chinese 'anything'.

What you certainly have there is a perfectly functional LED and a broken driver.

But don't take my word on it. Place that lamp onto a bench power supply. Tell the power supply to supply 10 milliamps max (better power supplies let you do this - very important). Then increase voltage until it lights.

Don't be tempted to run it at higher milliamps unless its heat sink is properly installed. That will burn it up.

Look at the driver

I'm pretty sure France uses something like the Europlug, and not that tiny little barrel connector I see. Therefore, there is something between the little barrel socket and AC mains power. My guess is the driver is an electrical "match" for that particular Cree emitter. That, I think, is the item which has failed.

That driver module you photographed, the picture is too poorly lit and blurry to make out the figures, but it clearly says "Constant Current Type". That's very important, and also not a surprise, since it is the nature of LEDs that they must be driven in a current-regulated fashion to get peak performance out of them. (they are unable to self-limit their current the way an incandescent can).

Anyway, any driver should suffice so long as it has

Remove those two Phillip screws and pull the plastic disk out of the fixture. Now you'll see the square led disk. It's number is Cree 1304N. You should be able to track it down and if you can solder, replace the square disk. You'll have to scrap off the old disk See the picture below. 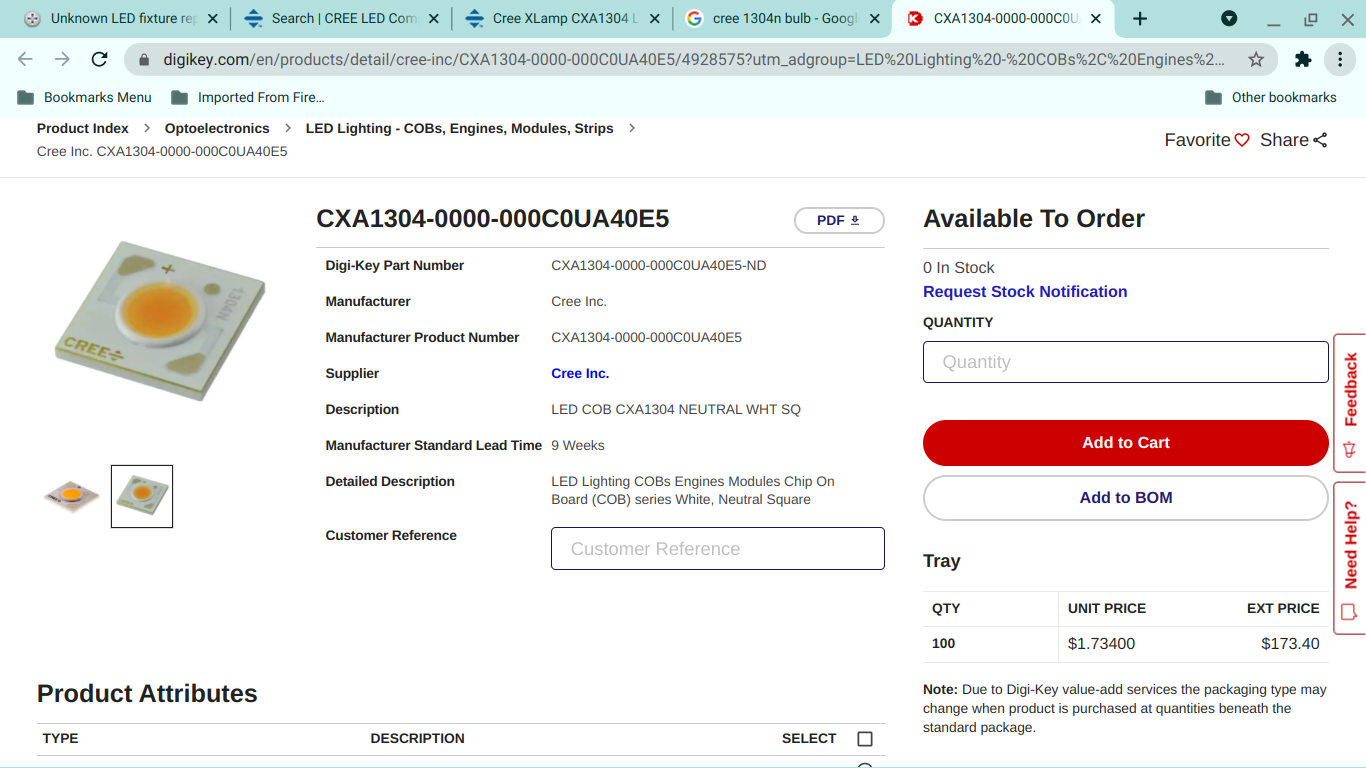 Not the answer you're looking for? Browse other questions tagged light-fixture led or ask your own question.

1
How do I wire LED lights directly from the panel?
0
what are my options when it comes to updating my recessed lighting?
5
How can I open this bathroom light fixture with an arrow and tiny hole - Asonia Round Brushed
0
How can I tell if a dimmer switch is LED compatible?
4
Bathroom ceiling light LED retrofit
0
Still looking for a 3-way dimmer switch that matches my existing light switches
1
faint led strip glow with negative voltage levels when turned off
0
Does EGANT B328 dimmer switch support LED?