My bathroom has a light fixture with an arrow and a small hole on the other side. How can I open it? I don't want to damage it but I have tried some clockwise rotating.

I am not sure what the arrow indicates or what needs to be done with that hole on the other side. 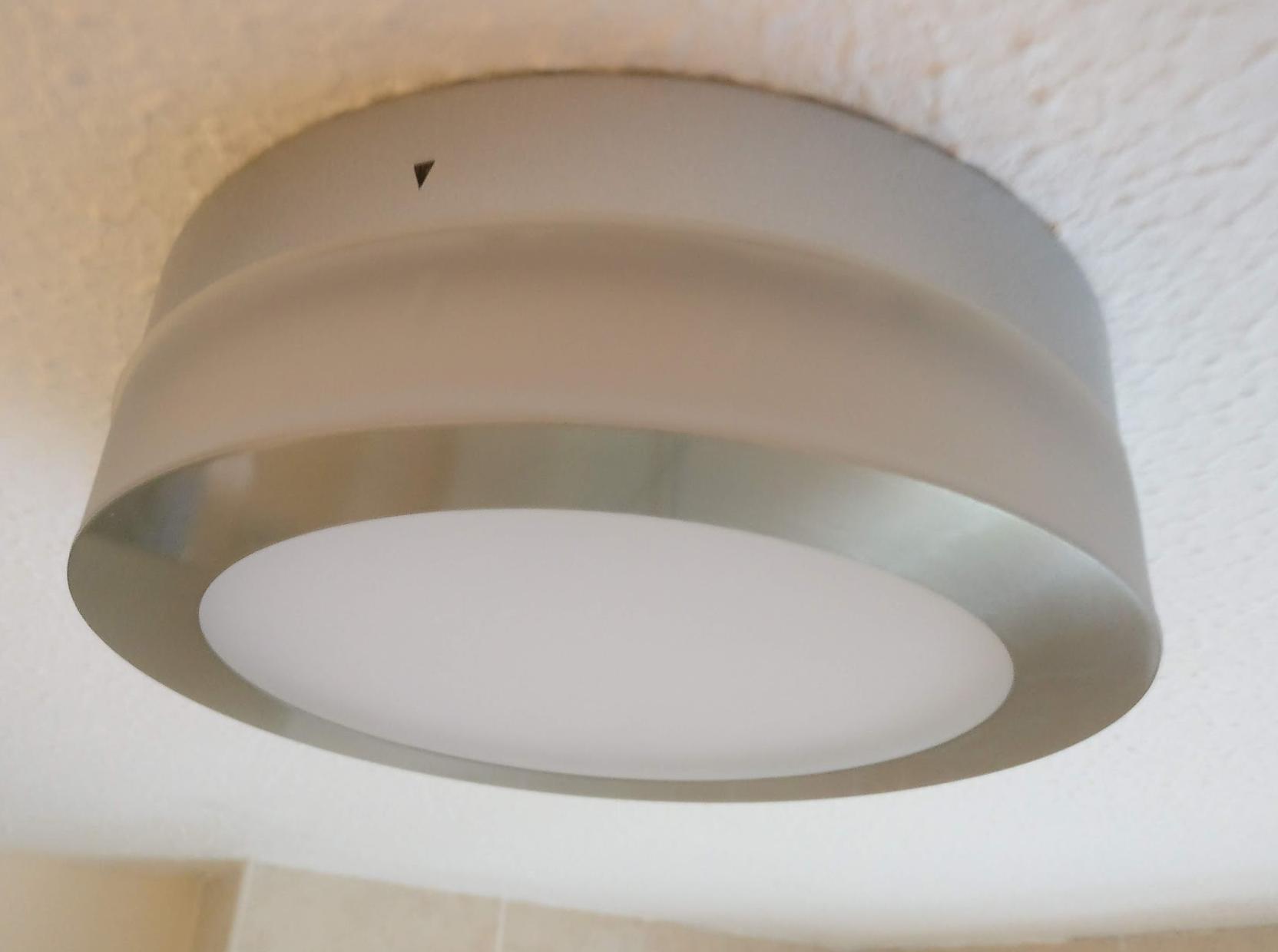 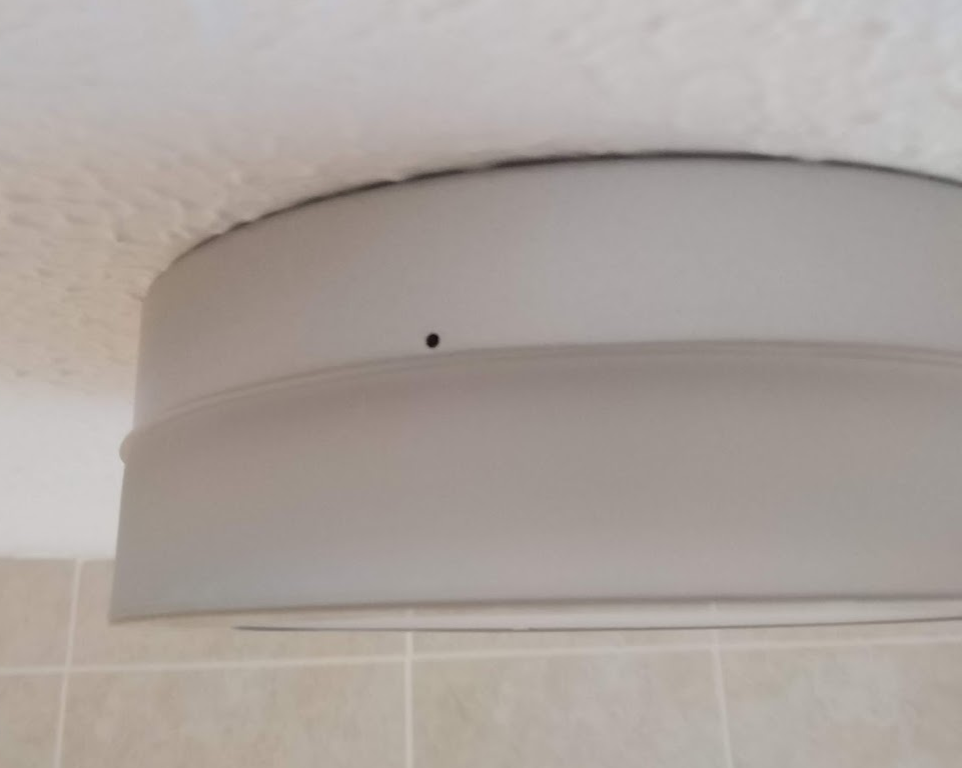 Edit - tried counterclockwise too, not budging. I tried sticking a small screwdriver in the hole but there's nothing catching.

Edit - I believe it is an Asonia Round Brushed chrome effect Bathroom ceiling light from B&Q.

Edit - I went to a B&Q and quietly opened a box and took this photo of the manual.

Edit - success! It was counter-clockwise rotation and required a lot of force. The fixture that comes off is very heavy so be careful.

And if anyone is ever reading this, don't buy this dull, useless light fixture for your bathroom. 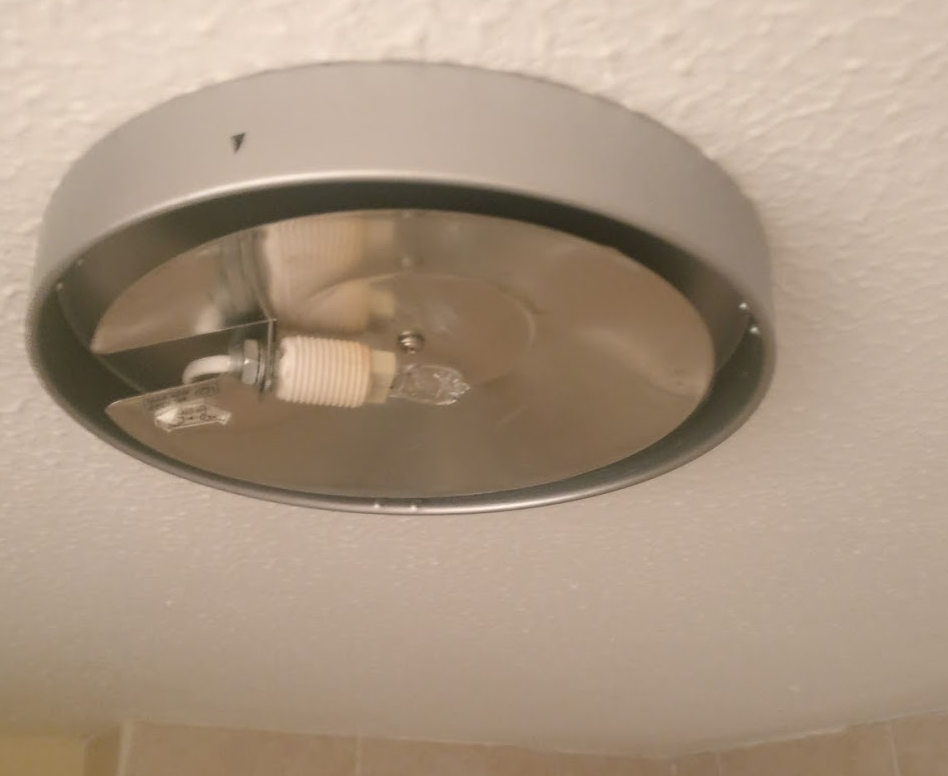 According to step 5.3 of the manual you posted:

it appears that you push the cover up and turn to the right (clockwise) with 1.91kg of force (which is very specific, but doesn't strike me as much, but I've not seen force noted that way before) to install the cover*. That implies that to remove the cover, you rotate to the left (counter/anti-clockwise), then pull down.

This appears to be borne out by step 1.2 on the furthest right panel of the instructions.

If you'll note the section of the instructions I've highlighted: 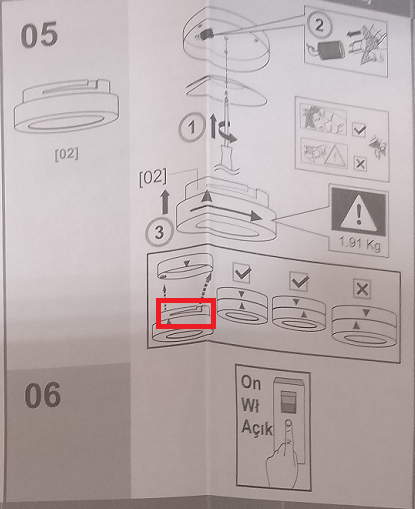 There appears to be an angled slot that will pull the lamp cover up into place as it is turned and lower it away from a key on the base as it is removed. You may need to pull down very slightly as you turn it.

It's also possible that the lamp cover has been in place for a while. Since you don't know how to remove it, I'm assuming that this is the first time you've changed a bulb in this fixture. If it's been there a while, it's possible that there's just been an accumulation of crud built up around the joint between the cover and the base and that it's just a bit sticky and will require a bit of extra force or some wiggling and gentle prying to remove. (Note - the fixture does look very clean, but that doesn't mean there isn't some small stuff that has settled into the joint line that's causing it to stick.)

In general, I think that it's just going to take more force to unscrew the cover than you've been applying.

* It just occurred to me - maybe the warning is that the lamp cover weighs 1.91Kg. That would be a very heavy cover and would most certainly warrant a warning as it looks like very light plastic that maybe weighs 100gm.

Not the answer you're looking for? Browse other questions tagged bathroom light-fixture or ask your own question.