I'm kind of stuck. I build a ceiling lighting in a smaller room using led trips in a rectangular shape with aluminium channel for better heat dissipation. All went well, until a couple days ago in the evening I found that my led strip has a very faint light when turned off (only visible during the night in nearly complete darkness). In the last days I've been there and back and couldn't find the cause. 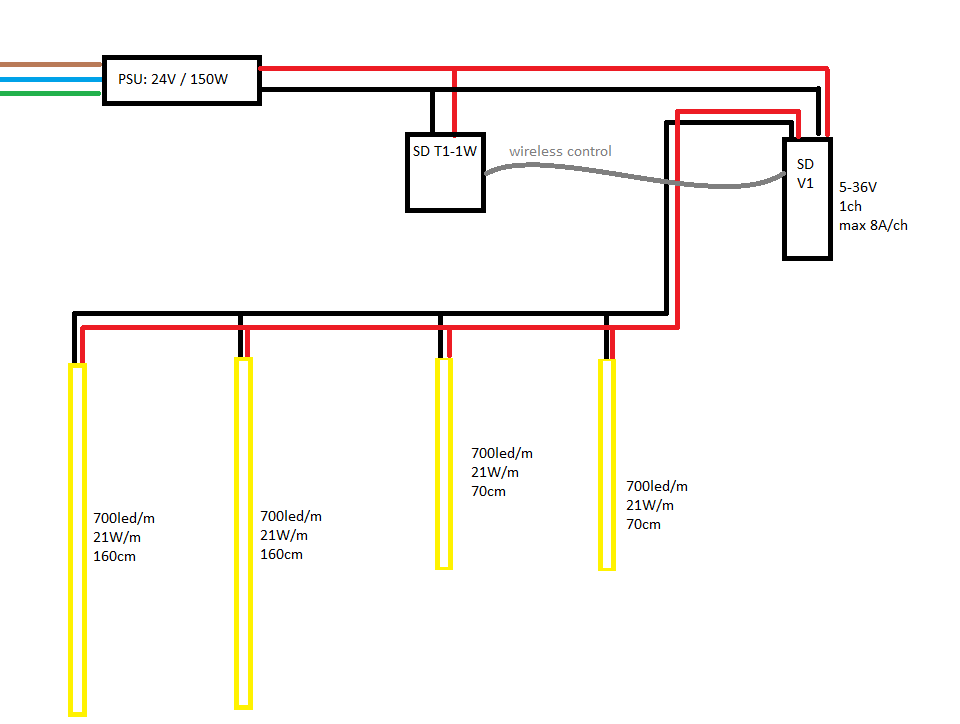 I'm using a multimeter to read voltage levels and all seems to be well until I turn the controller off. Setting the brightness to max levels on the SD-V1 controller, the input voltage is 23.8V, the output voltage is 23.7V, led strips light up as they should. No flickering, nice even light.

When I turn it off however, the I'd expect the voltage to drop to a 780mV range. Instead, I read -11.7V and the led strips remain on with a very faint light. I've already changed all equipment tested them separately everything works. If I disconnect any led strip segments they all behave the same (negative voltages while turned off). I took a smaller piece of the same led strip, disconnected the 4 strips and connected only the small piece and surprise, when turned off the voltage dropped to the ~780mV range with no faint lighting.

Any idea what can cause this behavior? I can eliminate the faint glow by adding a capacitor at the output of the SD-V1 controller but I'm rather interested what's causing it. I checked everything already and couldn't pinpoint any problems.

Talk to the manufacturer

This is an artifact in the behavior of the dimming controller (SD-V1). There aren't any stock answers on what to do about this, because controllers aren't supposed to do that at all. It is a unique, um, characteristic of that controller.

The manufacturer will be able to advise whether this is a defect vs normal behavior, and what options they can recommend to eliminate it.

Understand the way this type of dimming is done. It is not like the "triac dimming" used for AC power light bulbs.

24V DC LED strips (and 12V ones also) use "PWM Dimming". It does not vary the voltage or current.* It turns full voltage on, and off, hundreds of times a second (frequently enough to avoid any visible flicker). It varies the "duty cycle* (percent time "on") based on the dimmer setting; i.e. "Pulse Width Modulation" or PWM.

The upshot is that under PWM, when the lights are on, they are on at full power/brightness and illuminate at full spec. When they are off, they are off.

So what's going on here? There might be a leaky MOSFET inside the controller, but I doubt it. I suspect the MOSFET switches just fine, and the software in the PWM controller is choosing to turn the MOSFET on and off at a low duty cycle e.g. 1%.

So what's up with the weird voltage reading on the DVM? I suspect it is a reading error from a simple DVM, which is made for flat DC, or sinewave AC.

However, PWM systems need to be able to distribute that sharp square-wave signal to all lamps. Capacitance is the worst enemy of PWM light wiring, because it muddies the PWM square wave -- too much capacitance will reduce it into a "varying voltage" system, and that does not perform well with LEDs. It may also burn out the controller, because it is not designed to drive into a capacitive load, which will draw inordinate amounts of current to charge the capacitor.

The capacitor you mentioned acquiring, "Konoq LED Adapter Capacitor", is for a totally different problem space: AC Mains dimming using the "sinewave-clipping" method with a triac. (which obviously doesn't work on DC). It cures a problem with simple 2-wire (no neutral) triac dimmers which need to leak current through the bulbs, but the power supplies in screw-in LED "bulbs" don't permit that. That product definitely is not made for PWM dimming.

While you are talking with the manufacturer about the "won't go off" problem, I would ask them about the capacitor solution. I am fairly sure they are going to say "no, no, no".

* It does not vary voltage, because it would be ineffectual: LEDs are highly non-linear, and dimming would not occur linearly from 0-24V as one would desire.

It does not vary current because of the construction of 12/24V DC LED strips, which are comprised of many, many series strings of 3-6 LEDs + a resistor, in parallel with each other. Many strings or other types of 12 or 24V lighting can be paralleled as well (in the normal way). That works great with PWM, but a variable-current approach would cause current to favor some parallel paths over others (due to design differences of dissimilar lights, or manufacturing tolerances of similar ones). That would cause the lighting to be uneven, with visible differences in dimming between different series segments or different types of light.

8
Is an LED light strip safe to use under a bed?
0
AC to DC LED dimmer
1
Blue LED always on with led light strip
0
LED lights in bathroom
0
LED strip forgets last setting when turned off
0
Low-voltage LED Light string flickers when turned on, flickers go away after 2 mins
1
How directional is LED strip lighting (with a diffuser)?