Solar panels: converter has AC Voltage out of range

Since about six months our house has solar panels. There's a converter (4600 W) with two inputs hooked up to 6 and 7 solar panels respectively of 325 watt peak performance. Overall this setup runs fine.

On peak sunny moments however, the converter (which is hooked up to my wifi and I can read with an app on my phone) will tell me that my AC Outrange is out of bounds. On the Dutch power net, voltage should be 230V, with an upper tolerance of 253V. Apparently, we cross that threshold at times...

Now my question is: Is this over-voltage generated by my converter (and is that a factory defect / should my installer fix this) or is this voltage fed into my house over the power grid? I can imagine this happening on sunny days, as a lot of my neighbours have solar panels too.

I've polled this with the installer and the power company, but they're pointing fingers at each other and will send quite the invoice if they're called over to investigate. I'm trying to gauge what is causing this over-voltage to further pinpoint what party needs to fix this.

Included are two screen grabs of the app, showing one of the error messages, and the AC output voltage on a sunny moment (some time after getting the error). It rates the voltage at almost 250V, which is within tolerance, but barely. 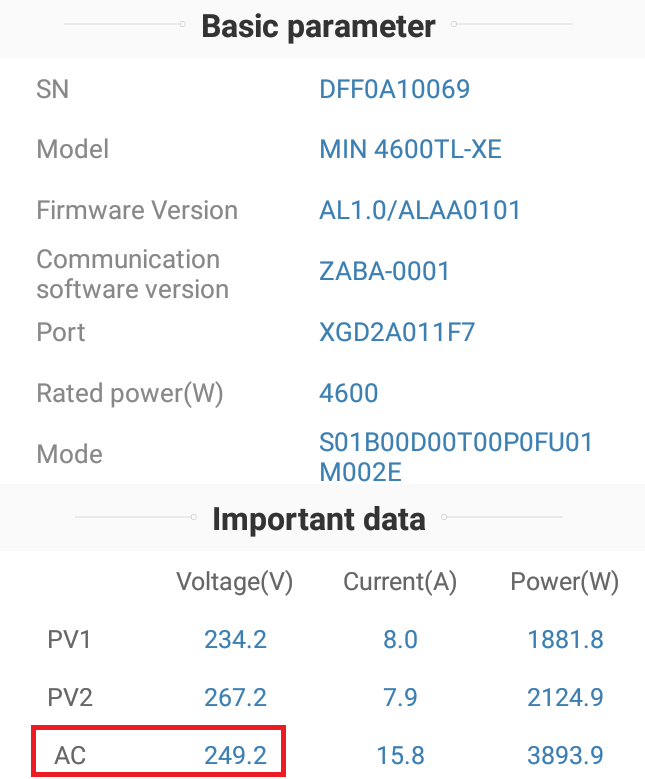 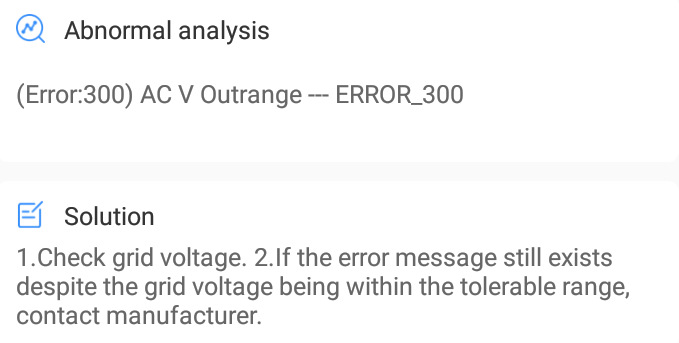 This is a safety feature to prevent "islanding".

Imagine you have a generator. Rule #1 of generators is "Don't backfeed the power grid!" Because if you did, that power would move backwards through the transformers, be stepped up to 9600 volt distribution voltage (which is the wire the tree fell on), and nail the linemen trying to restore your power! So you must have an interlock to prevent that.

Enter a grid-tied solar system. It does exactly the thing you can't do! Connect the "generator" to both the grid and your loads! How can that be safe???

Very simple. Solar grid-tie inverters are electronic and have a small computer onboard. And solar is a tiny generator compared to the grid at large: the dog will wag the tail. The grid is so much mightier than the solar array that the grid will force the voltage and frequency to be in spec. This is all specified in IEEE 1547 / UL 1741. So the grid-tie inverter is actively looking for deviations in frequency and voltage, which would indicate that the mighty grid isn't there anymore to force things to norms. Very slick design.

However... If the installed solar is too big compared to the grid capacity, they are poorly coupled: the tail can wag the dog as it were. And in a neighborhood full of solar systems, those systems can convince each other that they are the grid. Now you have an island. And that island can "go off and do its own thing" and lose touch with what the grid is doing. Now you have a backfeeding problem. That's what IEEE 1547 / UL 1741 are all about.

Thin wires will do it too

If the net solar generated in a particular place is much larger than the local load there, and the wires connecting to the rest of the grid are thin, then the local solar may have to push voltages pretty high to get its power out to the grid.

The more power being generated by solar locally, the higher it must push the voltage to push that power onto the grid.

So grid-tie inverters must be sensitive to that, and do their IEEE 1547 duty to disconnect. They look for voltages out of bounds, as well as frequency instabilities. Mind you, if the grid is up, it will force generators into sync. So a grid-tie inverter does not want to use its onboard clocks to keep frequency on-spec; it wants to deviate to see if the grid will pull it back in line.

Look at your on-property wiring.

Make sure you didn't make the "too thin for the duty" wires between grid-tie inverter and your meter.

Also see if your neighborhood has a glut of solar, and if your neighborhood's distribution lines may be weak. (this would be indicated by wide nighttime voltage fluctuations during high-load times vs low-load; like dusk when the air conditioners are blasting full, vs 5AM when they are quiescent). Has to be nighttime because you have to take the solar out of the picture.

It's highly unlikely that your inverter has the ability to drive your service above the output limit. More likely your location has an abnormal voltage possibly due to an unbalanced load or other issue with the electric service.

First of all you'll want to disconnect your inverter from the grid to avoid expensive damage at this point. Then check the grid voltage over time. If you have access to a logging monitor (or can rent one) that will give you a historical record of what's going on.

If the voltages are indeed abnormal even without the PV system connected, then your power utility need to come, investigate, and correct the problem.

If you find the voltage in-spec without the PV connected, then there may be a problem with the inverter. As it says, contact the manufacturer (or your installer) next.

Sounds like fairly normal operation, combined with "lots of my neighbors have solar panels" and "peak sunny moments."

To drive power back into the grid, your inverter (which you call, perfectly acceptably, a converter) has to provide voltage (slightly) above what the present grid voltage it sees at a given time is.

With lots of solar generation in your local area, all the inverters in all the other houses are doing the same. Occasionally, at "peak sunny moments" your inverter (and likely many of your neighboring inverters) are taking themselves off-line since the local grid voltage has risen too high, from all their contributions.

If this happened a great deal of the time, we might surmise that the power company should upgrade the neighborhood lines to get more power out, but if many neighbors in a wider area all have solar panels, that might require extensive rework of the power grid to get the "peak sunny moment" power somewhere it could be used, and as it's only the occasional "peak sunny moment" (per your description) it's probably not economically viable to upgrade the grid for a relatively small amount of peak sun power.

What you could do would be to use any heavy electric loads you have in your house deliberately timed for when these "peak sunny moments" were likely. Otherwise, just accept that occasionally, the solar power available exceeds the needs of the (reachable) grid, and your inverter will then take itself offline to keep the grid (and itself) safe.

The inverter was left on default setting. Get the installer to change it up to 253 volts.

i have seen this once.

If you want to look for,the setting yourself, The button press styles and description are below.

Not the answer you're looking for? Browse other questions tagged electrical solar-panels voltage the-netherlands or ask your own question.