In a residential solar array, bypass diodes are used when panels are in series to prevent a shaded panel from effectively becoming a large resistor. Blocking diodes prevent current from going back into a panel (or series of panels) in parallel with a load or other panel series. From what I understand, these were used in the dark ages (pun intended) of solar energy when people dumped the electricity from the panel straight into a battery bank and didn't want the reverse happening at night.

Do installers typically install blocking diodes for PV panels in parallel, such as with a string inverter? 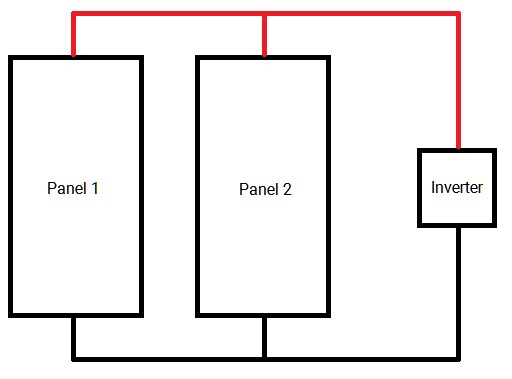 The inverter obviously doesn't rectify current so the panels can't draw power from the AC-side, but I am worried about, for example, if Panel 1 is at a slightly higher voltage than Panel 2 and some current produced in Panel 1 being sunk by Panel 2 as a result.

In this case, I am working with "identical" (same manufacturer and model, and likely manufactured around the same date in the same facility) panels.

They are required. If the panel becomes shaded it is considered DARK. If the panel is Dirty it is Dark. What happens is your produced voltage has a PATH to the other panel. The Diodes block that action - allowing current to flow in only one direction.

These blocking diodes, also called a series diode or isolation diode, ensure that the electrical current only flows in one direction “OUT” of the series array to the external load, controller or batteries.

The reason for this is to prevent the current generated by the other parallel connected PV panels in the same array flowing back through a weaker (shaded) network and also to prevent the fully charged batteries from discharging or draining back through the array at night. So when multiple solar panels are connected in parallel, blocking diodes should be used in each parallel connected branch.

Excerpt above from here ^

Not the answer you're looking for? Browse other questions tagged wiring solar-panels or ask your own question.

81
Are solar panels cost-effective?
0
How do I hack cheap garden/solar lights to make a remote solar panel array?
3
Photovoltaic installation: does it make sense (or is possible at all) to get a bigger inverter than the power output of the installed panels?
0
Will this solar panel setup work?
2
DIY Solar Panel Install
1
How should I connect my solar panels to each controller for optimal performance (series or parallel) without buying new charge controller?
0
Does it matter on which phase the solar panel inverter is connected?
3
How many wires can I fit in 1" schedule 40 PVC conduit?