What are the consequences of incorrect positioning of air separator (and swapped return/flow) in solar heating system?

I've moved into a house that has a Vaillant Solar system for helping heat the water. We had various issues that resulted in a Vaillant engineer visiting, who pointed out various problems, including a missing air separator.

The installer returned and added the air seperator, and I thought this would be the last of it :)

However; we've noticed that over time the pressure has been dropping; and rising again when hot (this rising makes me think it's not just a leak). When the last work was done, the pressure was 2-3 bar even when cold. The pressure relief valve is 6bar. Today, the pressure is 0.5bar at 30-40 degrees; but rises to around 2bar at 60-70 degrees.

After checking the manual again; I believe there are two issues; but I'd like to know the impact of them (whether they're the likely cause) before embarking on the mission that is trying to get Taylor Wimpey and/or the installers to fix stuff; because it's a world of pain, and nobody seems to have a clue about how this system works.

Here's a picture showing the system and where the air separator should be installed (page 28 of the manual): 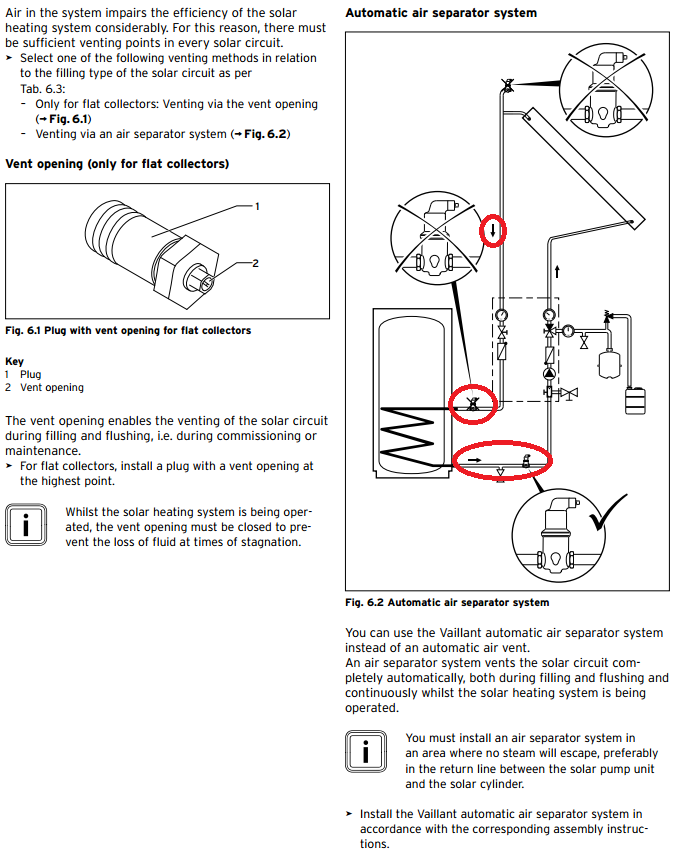 I've marked some things in red relating to the positioning of the air separator. The things that appear to be incorrect in my system are:

Having the coil connections crossed over will decrease the efficiency of system. In the worst case it would be better to turn off the solar part of the system than have it run as installed!

In a heat exchanger like this, you want the outgoing fluid to be as cold as possible. For this reason you want it exiting the bottom of the tank where the water is colder.

In your case it might be so bad that hot water tank is heating the fluid above the input temperature and that the solar system is actually removing heat from the hot water tank. Even if it's not that bad it's definitely not good.

I don't know what would cause the pressure drop but I would agree with you that it appears your air separate was not installed as per the manual.

If you are experiencing large pressure changes as the temperature rises and falls, then the culprit could be the expansion vessel. This is designed to expand like a balloon, when the temperature of the system increases and thus reduces the increase in pressure that would otherwise result.

Not the answer you're looking for? Browse other questions tagged heating installation solar-panels or ask your own question.

2
Using a solar system with a condensing boiler for the central heating instead of tap-water?
3
What should I do about this Alpha HE CB33 Boiler pressure error condition?
4
Why do my downstairs radiators run colder than upstairs?
1
Can a boiler water feed / pressure relief valve be repaired?
1
Boiler system shows different pressures
2
Anyone installed a hot water coil in their HVAC ductwork to increase heat pump efficiency?
0
Can a new water heater cause a Aquatherm heating system to fail?
0
banging sound from gas boiler