My AC is not working. It is a Trane AC (Model 2TTB0030A1000AA). In the process of diagnosis I tried replacing the capacitor, and that did not help. I tested the fan blades and they no longer spin easily. I purchased a new AC fan motor (the blades now spin effortlessly).

I have a problem trying to install it. There are 4 holes where the motor should mount to the top grill of the AC. The motor came with 4 fine-threaded bolts that presumably go into the holes. The bolts do not have thread cutting tips and those holes are not threaded! See attached photo. 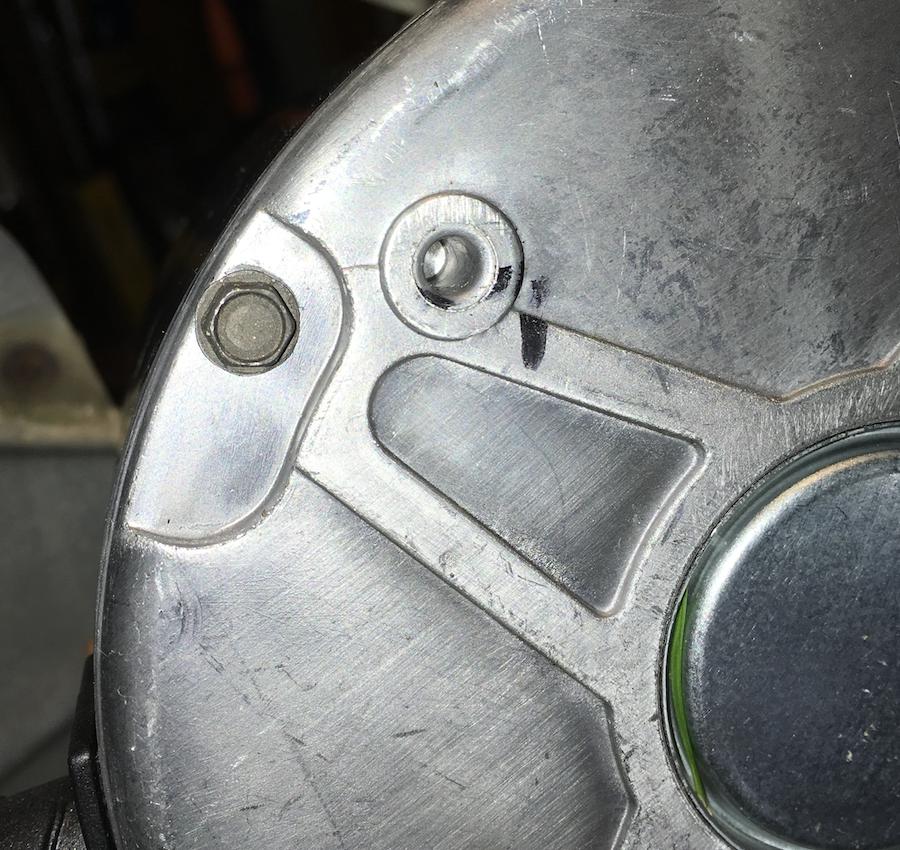 Notice that the hole (where the sharpy mark is) is not threaded. The bolt in the image holds the housing together.

EDIT Below I added is the corresponding hole in the old motor (notice the whole is threaded). 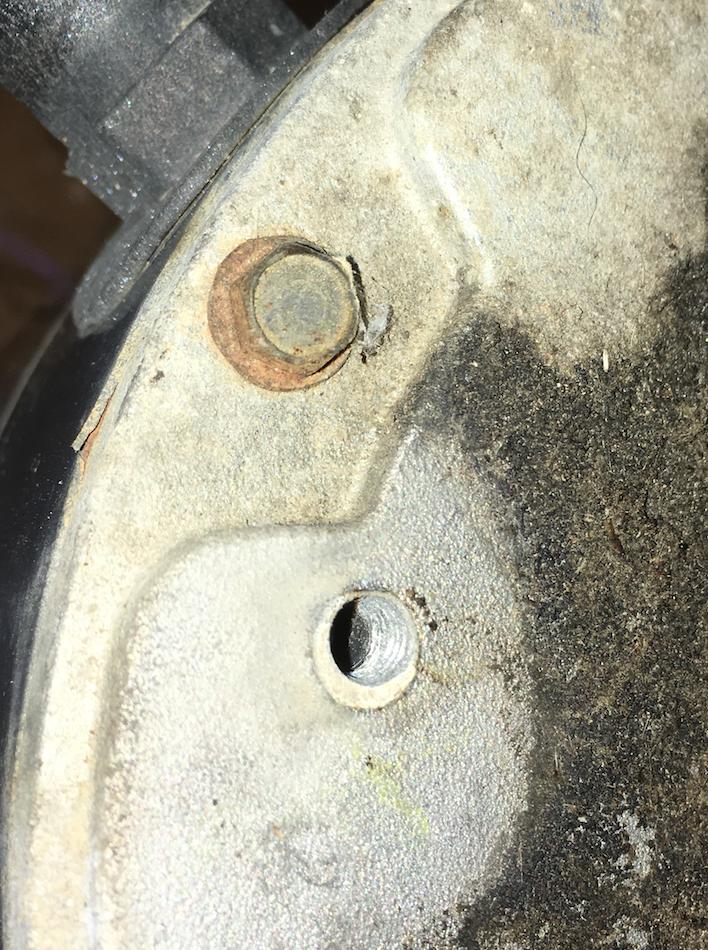 Did I get a defective fan motor, or am I expected to tap these holes?

Today I visited the parts store that I bought this from and they insisted that this was normal. He suggested that I use a power drill to drive the bolts into the case (no tapping of holes involved).

I followed his instructions and it attached easily and solidly. I suspect that the screws are a stronger metal than the holes in the case and the increased friction from displacing the softer case metal prevents the screws from loosening over time. This must be their solution in place of using loc-tite or lock washers.

Defective is a strong word. It most likely works, lets just put it in. It looks like aluminum, so a steel screw should have no problem threading itself, if you can get it started.

Stick it facing up in the box with the Styrofoam. Get a hand held nut driver and push down really hard to start the screw. 'thread' all four holes while it's benched, and then go put it in.

If that fails, then it's 'defective' (because I'm not sure how you're supposed to thread a 1/2" deep hole with a tap where the cutting threads start a 1/4" up the shaft). And then we get another one at Trane's expense, until they send you one that's threaded (even if that's not how they come). A direct OEM replacement part should not have to be field modified.

If none of that is an option, my last resort would be to use an impact driver to drive my own (not fine thread) sheet metal screws in and call it done. Which is not ideal; something that shimmies that much should probably be fine thread.

Try their screws first, then give up and use whatever you have to.

The rest of this answer is wrong. The comments below it might help though.

What does the "other screw in the image" look like on the other end? If there's nuts, you take the nuts off, pull those ~8" long bolts out, then you can install it. Don't let it fall apart while you do it.

Usually replacement motors have these bolts going the other way, with studs sticking out that you put cap nuts on.

Not the answer you're looking for? Browse other questions tagged hvac air-conditioning electric-motor or ask your own question.

4
How freely should a central A/C condenser fan spin?
4
Why is my A/C condenser fan motor wiring backwards, and how can I fix it?
9
How can I further diagnose my central air conditioning compressor fan motor and capacitor?
3
Help diagnose a compressor problem
1
A/C Fan won't turn on outside after replacing capacitor
1
Choosing a Replacement A/C Condenser Fan Motor
5
Replaced Blower Motor, but A/C won't stay on unless power button is held down