Replaced Blower Motor, but A/C won't stay on unless power button is held down

My HVAC has an electric furnace blower motor for both heating and cooling. I called a repair guy out who explained that the capacitor was good, I just needed a new motor because it had gone out. I opted not to pay the $700 for a new OEM motor and picked up one off Amazon for $100 and installed it myself. Installation seemed relatively straight forward, all the wires were the same, hooked it up to the control board pretty simply, etc.

I then flipped the switch and hit the power button. The control board blinked once and nothing happened. Tried it a couple times, always the same deal. It certainly appears the control board doesn't have power.

Then I tried holding down the power switch. After about 3-4 seconds, the blower came on and everything was good. Then I let go of the power switch and it immediately shut off.

Gave the system 5 minutes to reset, then tried it again... held the power down for a minute or two so my wife could verify that yes, cold air was blowing throughout the house and everything was good. Then I accidentally brushed my finger against the blower housing (Edit: I am not positive it was the blower housing... possible it was an interconnect, the capacitor or something else) and gave myself a hell of a shock, forcing me to let go of the power button and everything shut off again. Control board wasn't showing any errors (just a slow LED blinking which it says means that it's not heating), but again as soon as I let go of the power button, the control board LED goes off.

Anyone have any ideas? I'm incredibly concerned about why the outside of the blower housing would be electrified (Edit: On further reflection I'm not sure it was), but the motor did have a ground to the motor mount, which I reattached before attaching it to the blower.

There's no spark from the capacitor when I short it out before touching anything, so I'm wondering if it's charging correctly... but again, not sure what that would have to do with the power issues.

This is the power button I'm referring to: 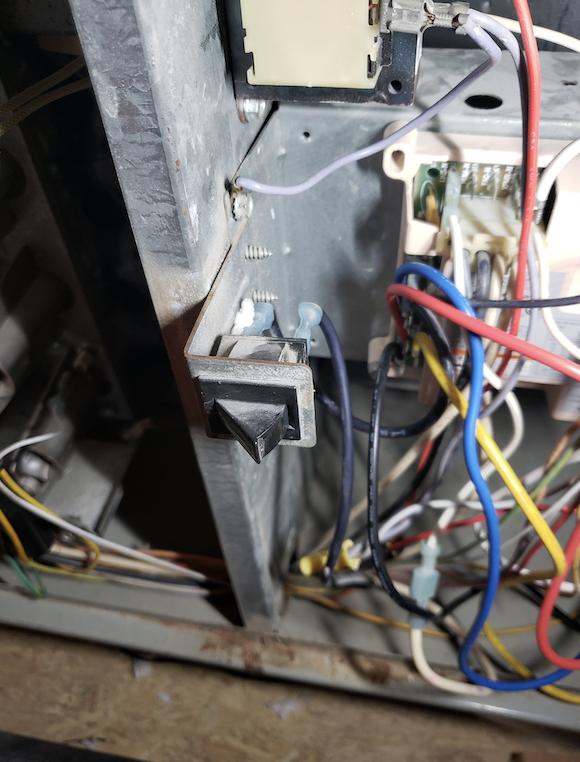 I don’t think that is a power switch. That is a safety switch that is depressed by the cabinet panels when you put everything back together. It should not work unless it is depressed. You should be good. Not sure how you got shocked though.

Not the answer you're looking for? Browse other questions tagged hvac air-conditioning electric-motor or ask your own question.

29
Electric shock - was I stupid, unlucky, or a combination of both?

2
Furnace blower motor won't turn off
1
blower motor only starts after I turn power to it off and back on
1
Furnace blower motor makes buzzing noise and won't start
1
Did I blow the motor of my table saw?
1
AC Blower Motor not working during night
3
My induction blower never stops
3
Unthreaded holes for AC fan motor mounting screws?