Why is my A/C condenser fan motor wiring backwards, and how can I fix it?

I've just replaced my condenser fan motor on my home A/C unit with this unit: http://www.grainger.com/Grainger/GENERAL-ELECTRIC-Condenser-Fan-Motor-2PRA6

The HP, RPM's and amp ratings all match. The old one was CW only and the new was CW/CCW. I switched the jumper to make sure it was spinning clockwise like the old one. I researched how to wire it and got it installed. It fired up right away and sounded good, no vibrations or anything. The problem is air was blowing down and out of the side instead of out of the top. I immediately thought I installed the fan upside down even though I marked it before removing it from the old unit.

I then took a look at the blade closely and the blade has a concave shape that is turned up. From what I understand that is indeed the direction the concave shape of the blade should point. Additionally, the blade is slightly discolored on the edges, but curiously in the counter-clockwise direction. Finally, and perhaps most importantly, the arms that the blades are riveted to and the mounting hub are under the blades when looking down. So, I know it's definitely installed correctly.

Next, I took a look at the wiring on the contactor. When I removed the old motor, I cut the wires and left them connected so I knew exactly where they were when installing the new motor. Then, I noticed something strange on second inspection. Black was on L2 instead of L1 like on every post I found online on how to install this motor. It was this way for sure from before, I did not confuse anything. I waited until just before I installed the new one to remove it from the terminal.

I'm wondering if the initial installer reversed L1 and L2 to get the old motor to spin counter-clockwise. I know that's possible with DC motors, but I don't know if that was common practice. My first instinct was to just switch the directional jumper on the new motor, but if it's currently hooked up backwards, I don't want to leave it that way.

Yes, the concave shape should always curve in the direction of the air flow... 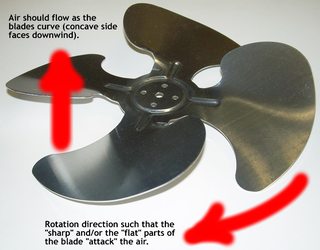 Switching the L1 and L2 wires wouldn't change the motor's direction and the colors are a bit arbitrary since this is a 220V circuit. Verify that it is 220V and that neither wire is the neutral, then mark the white wire with black electrician's tape to signal that it is "hot" too.

It's a common thing to switch the polarity of the start windings relative to the run windings to change an AC motor's direction. These are usually yellow and orange wires, and the previous installer may have switched these. If you can't tell that this kind of switch was done, don't worry about it and set the new motor's jumper to get it spinning in the right direction.

But, if you aren't certain or comfortable with the situation, have an electrician look it over.

I bought a house and the A/C condenser fan was spinning counterclockwise (blowing through the sides and sucking from the top). I guessed the capacitor was bad, but it turned out it was good. I pulled the dual capacitor out and found the wires had been connected wrong. I followed the 2 wires from the fan and switched them. Either one of them must be on the "fan" port and the other on the "common" port, along with one wire from the condenser. It worked.

The A/C is now functioning fully and properly, both from this change and from a good cleaning of the evaporator coils, condenser coils, blower fan, and drip pan and tube. There is a fin comb to help straighten the fins.

I installed a new dual capacitor and the fan started spinning the wrong way, after testing the fan- common terminals ( 5 mf either way ) I reversed the terminals and now the unit is working OK, so the position of the terminals determined the direction of the fan rotation.

Not the answer you're looking for? Browse other questions tagged air-conditioning fan electric-motor or ask your own question.