I'm struggling to find the ceiling joists from which to hang lights in an old apartment.

The building is in central Copenhagen and was built in the 1850s, so I can't assume that the joists are spaced 16" or 24" apart. Furthermore, there's quite a large, decorative cornice so nor can I simply measure out from where the wall meets the ceiling.

And to exacerbate the situation, I don't even know which way the joists run. I would expect them to span the shortest distance but I have a suspicion that my apartment and the apartment through the wall were originally a single dwelling which would make the shortest span originally the longest span. I could compare with the wooden floorboards but these are brand new and I'm not convinced that they've been laid directly on the joists instead of underlying, older floorboards (different floors are at slightly different heights but all the floorboards run in the same direction).

I tried to use magnets to locate nails or screws which would fasten the ceiling plaster/gypsum to the joists. But what I found was puzzling: the magnets stick to the ceiling in a continuous line across the short span, from wall to wall. And this repeats 3 times 6-8" out from the front wall, then 24.5" inches across the rest of the ceiling.

So I assumed that this was a form of fastening to a joist and drilled a small hole immediately to the side of the very narrow magnetic line. The drill went right through without finding wood.

I put a U-shaped piece of wire into the hole, intending to turn it until it hit a joist (and the side of the 'U' below the ceiling would point to the joist) and a lot of grainy, grey dust poured out of the hole. I tried it again and more dust poured out. In fact, each time I try to insert the wire, a continuous stream of the grey dust pours out.

Also, the building was renovated immediately before we moved in so there's only one indication of where a light was previously hung, and it's in an odd location where we don't want a light.

We've asked a couple of neighbours and both are using only floor-standing lamps because of the lack of clues on the ceiling.

Does anyone have any recommendations? All I can think of doing now is drilling more holes until I hit wood, but without knowing how far apart or how wide are the joists, or even which way they run, I could end up with more holes than plaster/gypsum on the ceiling.

If the hole you drilled already is larger than a quarter inch, get a cheap usb borescope inspection camera and stick it in there to take a look. 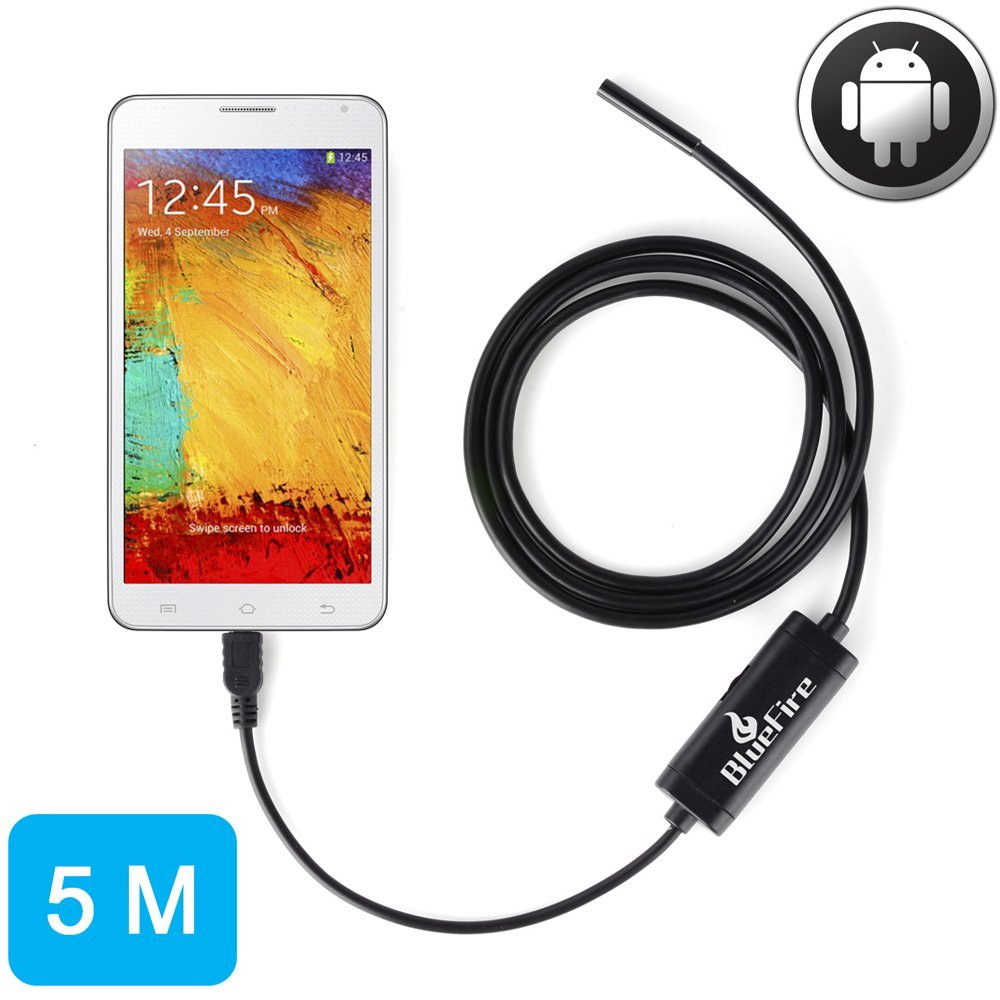 They're available for phone and laptop connection on amazon for under $20 USD.

You can also use a FLIR camera to find studs pretty easy. 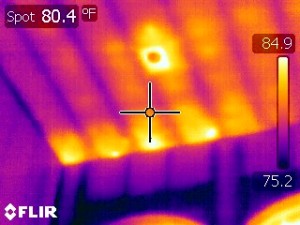 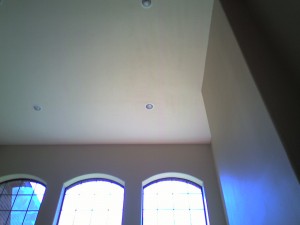 FLIR cameras are a bit more than $20. Think $2000 for good ones. But you can get lite versions for android and apple smartphones for < $300 USD and you can usually rent them the advanced ones at your local home improvement stores for less than that.

TIP: When you rent a flir camera, use it to photograph EVERYTHING in your house. EVERYTHING. Save the pictures for future reference.

Could be a suspended rigid plaster ceiling hung from a wire grid...they vary in thickness from 1” to 2”+

Can you remove the existing light fixture and peek in to see how it’s supported?

Not the answer you're looking for? Browse other questions tagged ceiling light-fixture joists hanging or ask your own question.

2
How to find joists through sheetmetal ceiling?
1
How can I add joists to an existing trussed ceiling?
6
How to improve wooden joists without removing them
3
Which way should my joists run for a tray ceiling?
1
Appropriate fixing to lay joists on top of binders
1
Can I span 23 feet with doubled 2x8 floor joists?
1
Finding ceiling joists overhead
0
Installing Hammock Chair from Ceiling with Metal Joists
2
How should I fix sag in joists and floorboards?
3
How to add ceiling joists to 20 foot wide garage?