How to improve wooden joists without removing them

At some point in the past, the previous owner has cut a 4/5 foot section out of 4 of the 8 joists and replaced the timber using metal straps. As a result, the 4 pieced joists have sunken in the middle and are no longer level (unsurprisingly!).

The ideal option would be to replace the joists but I don't want to ruin the lovely period plaster ceiling attached to the underside of the joists.

My idea was to bolt new joists to the existing joists at the point were they immediately leave the brickwork. Would this work? My aim is to strengthen the joists and level the floor. 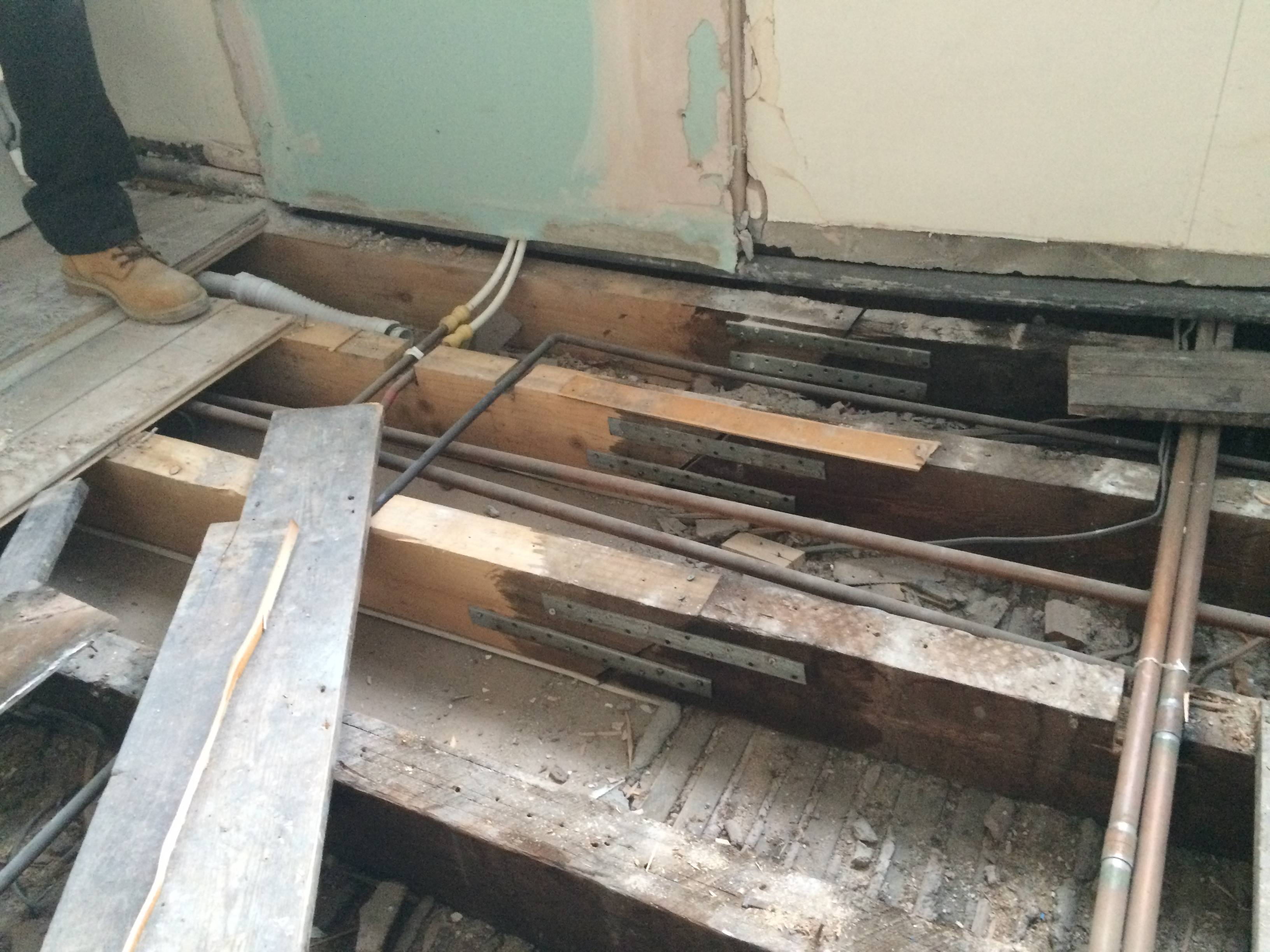 My answer over here is probably better suited to your question than it was there. But that was about sistering, you're talking about scabbing (the other answers there may also be helpful).

What you are talking about doing is scabbing. Sistering is adding the same dimension board for the full length of the joist. Scabbing is acceptable for individual random joist repairs. It would not be acceptable if all 9 are consecutive joists. Scabbing should be done with the same dimension lumber extended 4' past the affected area. Then it should be BOLTED with 1/2 min. diameter lag bolts in a zig-zag pattern to eliminate shear cracks from forming. –oldhouseweb.com

There is no hard and fast rule on scabbing that I've found. The "acceptable" recommendation above is the opinion of that poster. Done correctly there should be no problem, IMO.

30+ yrs as a carpenter and don't know of any real rule of thumb. Call-out varies with severity of notching, joist size and span. I'd recommend qualified contractor or SE and let it go at that.

That seems to be about it for recommendations on scabbing (they may be citing code, but I couldn't find it).

I might do one 2-by-X on each side before I had to match those four-by's. Either way, do a new load calculation and over estimate it: those old joists are now less than helpful. The lag screws I linked to in my other answer are nice (but you need a real impact driver to sink them) but if you go with 4-by's, you'll probably need bolts anyway. And since you're scabbing instead of sistering, I think bolts are in order, at least at the ends.

As for a fastening schedule, other than that sisters need two every 16" max, I'm at a loss. But here's a nice staggered pattern, with notes about distances from the edge, etc. (just ignore that it's a splice). Use four bolts like that at each end, and for simplicity, tack the rest of the old joist up to it with those screws. Again, be aware you'll need a serious impact driver for them or you'll be drilling holes just like for bolts anyway.

The only thing those old joists are going to be doing when you're done is hanging that ceiling.

No matter what method you use to strengthen these joists, you will have to jack them up from down below before adding your sister joists or maybe flat steel to the sides of them.

The floor will have to be level before bolting anything together. This may destroy your plaster ceiling down below anyway. You may be able to use wood and XPS foam to cushion and spread the force of the jacks from below.

Most unfortunate they spliced those with those wimpy metal straps.

Not the answer you're looking for? Browse other questions tagged floor joists or ask your own question.

8
How do I vertically connect two 4x4s on a deck to build a roof?
5
How do you sister joists?
1
How can I repair the end of joists sitting in brick pockets?

2
Do I need to brace joists after removing basement ceiling?
2
How can I make a wooden floor flat, without using self leveling product?
0
How do I glue moving ceramic tiles without removing them?
1
How do I lay joists over a complex-sloped basement floor
1
How can I level the joists and ceiling?
1
How should I strengthen my floor joists that are too small?
3
Finding ceiling joists in an old apartment
3
How to replace porch joists?
2
Attach Deck Joists at 45° angle without Hangers