I am trying to find some ceiling joists to hang a punching bag from. I have hit one joist, I got it because the track from my garage on the same parallel. I drilled a hole, hit wood, and verified with a nail. I then went 12, 16, and 18 inches and got nothing. I drilled about 2" through the ceiling (cement) and then air. 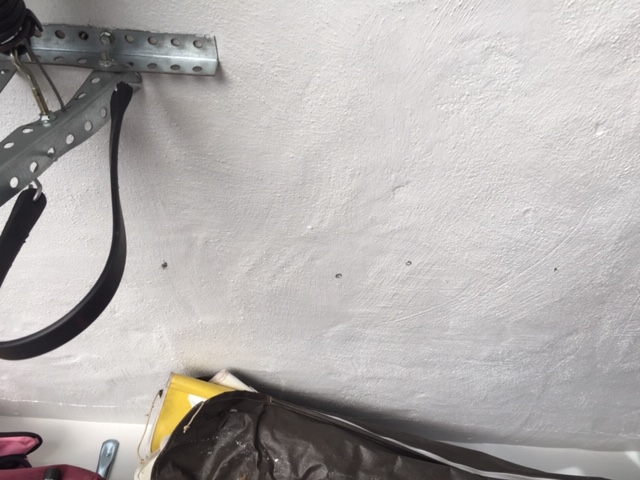 I tried a stud finder and it seems to be useless.

Any suggestions? I know the pictures arent great but this is what it looks like: 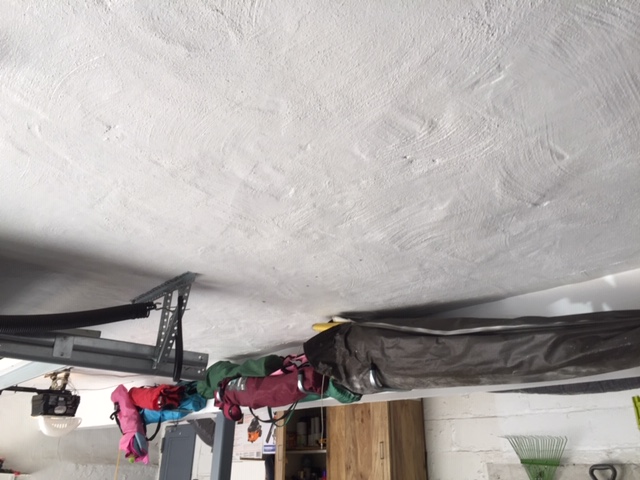 The joists are likely on either 16 inch or 24 inch on center (OC) spacing, though rarely some are 19.2 inch oc. They will usually span in the direction of the shortest room dimension but not always.

Since you have one located as you noted, I suggest measuring 16 inch and 24 inch in both directions and try drilling there and you should hit them with one of the holes. You can also 'thump' with your knuckle or object to get listen for the difference between the solid sound near a joist and the hollow sound between joists to get an idea of where they are located. And if you get very good, can even locate them fairly well.

Your stud finder might have another setting for thick walls, try using that. Also, the stud finder works only if you start between joists. It senses depth of objects and only reports thicker ones. So if you start on a joist, it will not tell you anything. Also, because of how it works, a stud finder does not give good results for walls or ceilings that have very rough surfaces or surfaces that change in thickness.

Not the answer you're looking for? Browse other questions tagged drywall ceiling studs plaster hanging or ask your own question.

4
How far can I move ceiling joists up?
3
How do I hang a pot rack in a plaster ceiling?
1
Trouble finding studs in garage
3
Drilling, hit metal running vertical floor to ceiling
1
Did I miss the stud when I drilled into the wall?
3
Finding ceiling joists in an old apartment
0
Proper drilling
0
Finding studs behind new build drywall to mount TV
1
Question about framing a lowered ceiling (like a large soffit.)