How to add ceiling joists to 20 foot wide garage?

I am planning to insulate my unfinished garage, which leads to adding a ceiling. There are 4 2x6 joists spacing around 50”. How do I add more joists to support drywall and fiberglass rolls? Location north California. 20 feet span seems too long even for none storage ceiling. Do I need to add a beam from back wall to garage door? joists hang on beam. The other ways is to hang to roof joists? The problem is the roof is not flat, contains many planes. I updated pictures. Hopefully it could show the structure of the roof. Additional question, how do I ceiling the flue pipe area? The huge duct from coil also block one joist. 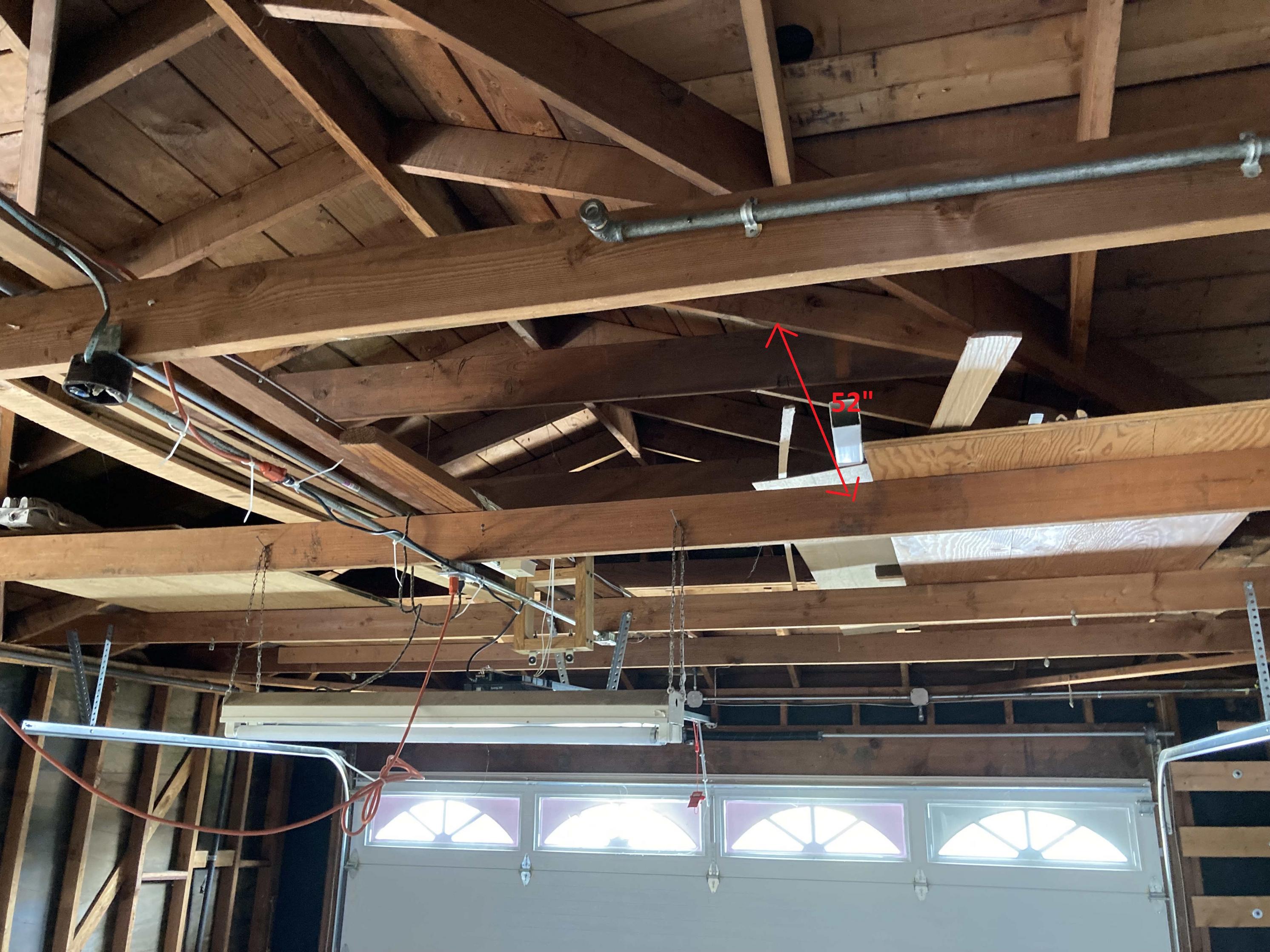 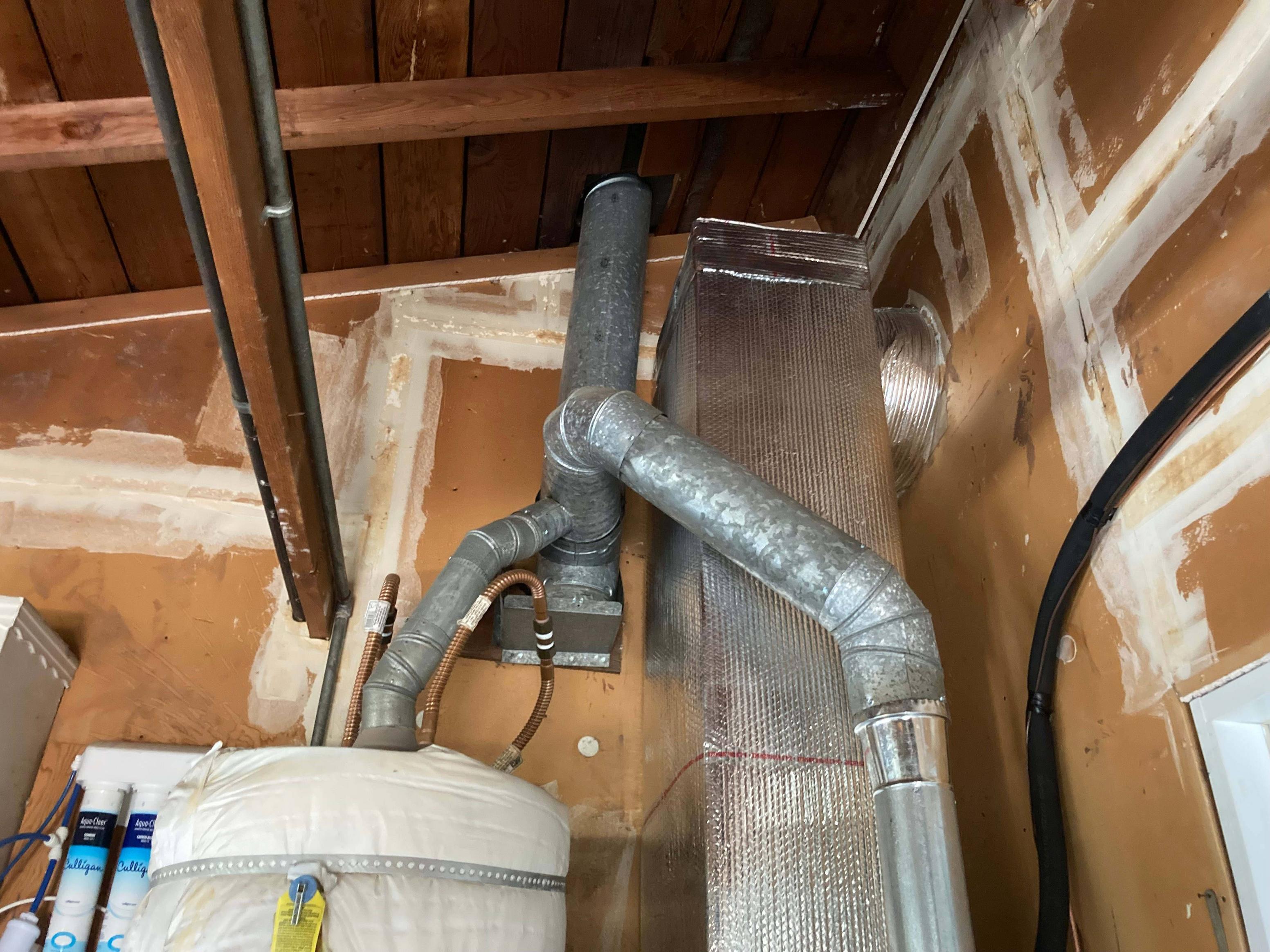 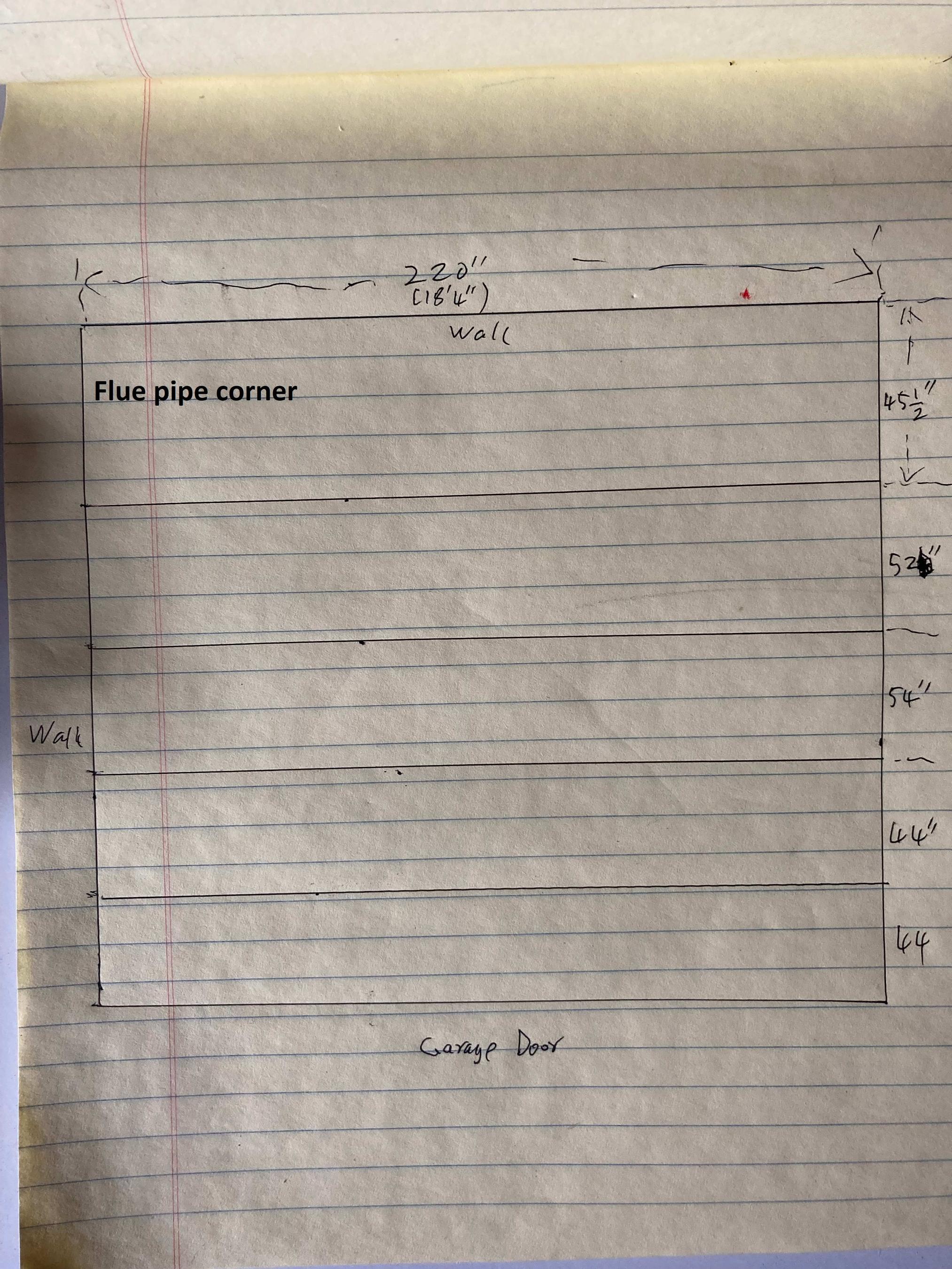 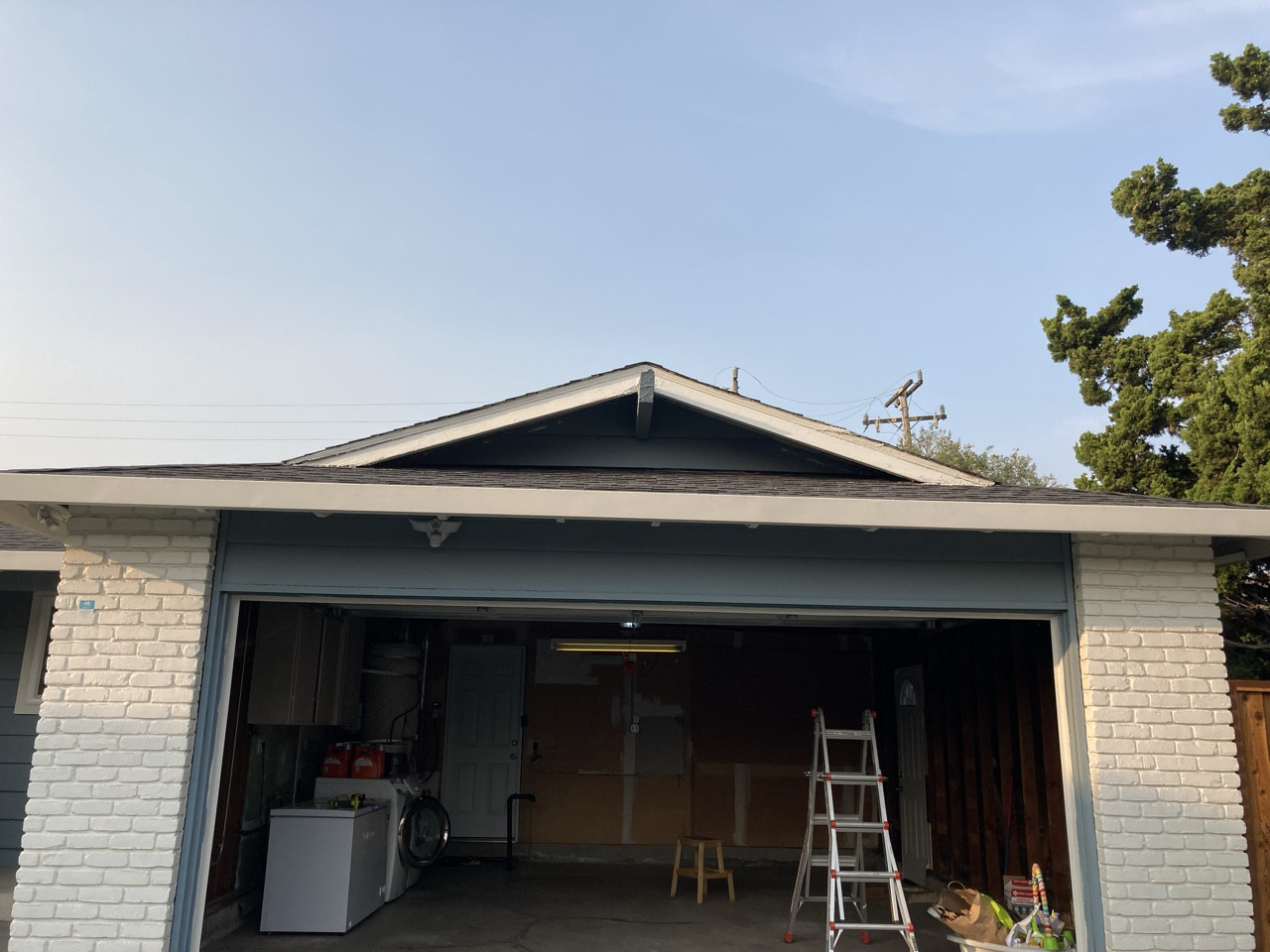 You can span 20' for a ceiling with 9½" engineered (TJI) joists on 16" or 19.2" centers. Won't be cheap, but it would be a quick, clean solution. You'd probably have to hang them on a ledger, which means you'd lose some ceiling height, and you'd need to brace the tops against lateral movement.

As SteveSh commented, the existing "joists" are actually rafter ties in tension. Don't get the impression that they indicate that a 2x6 will span that distance under any load at all without major deflection. I'd guess that those are already quite sagged.

Whether or not the roof structure can support the weight of drywall and insulation is a question we probably can't answer for you.

Assuming that it can, however, we can make suggestions as to how to support the drywall. One possibility is to add more wood structure so that the drywall is supported at, say, 24 inch spacing.

Another possibility is to build a suspended drywall ceiling and hang it from whatever rafters or other structure is convenient and suitable. This might work well since you mention that the roof contains many planes, but (we presume) the ceiling should be on a single plane. I wrote a little about suspended drywall ceilings in an answer on another question.

I would go with your suggestion of "add a beam". Cut the existing joists in the center, removing ~4" of the joist. This would allow you to install a double-up 2x12 or 2x14 glulam type of beam (actual size would depend on your load analysis), then attach the cut back joists to the beam with hangars. You would also need appropriately sized posts to support the beam at each end, and ensure that what the posts bear on is solid (like the foundation wall). Oh, and of course, you need to build a temp wall on both sides of the center of the cut out joists to keep them from falling. 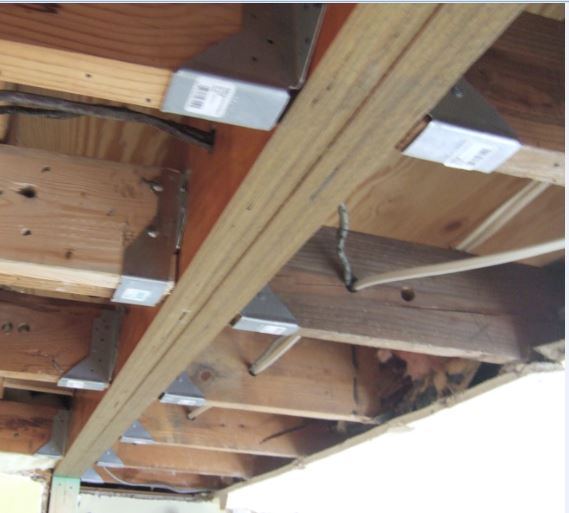 brhans brought up a good point about the fact that the joist hangars shown above are not rated for a lateral load - the joist pulling away from the beam. Some tension ties that connect the two halves of the joist together would solve that problem. Here's a page from the Simpson catalog showing typical tension ties. 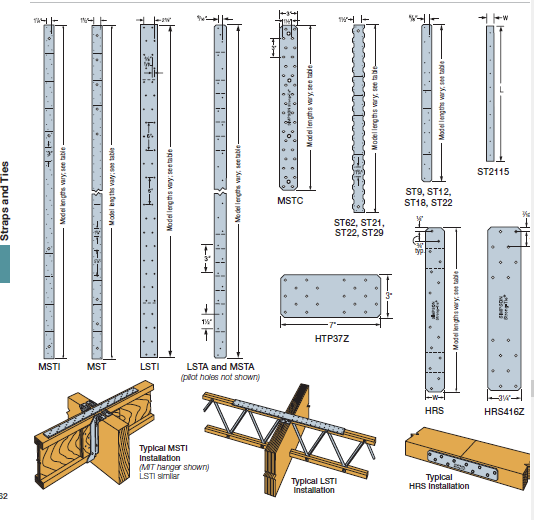 Not the answer you're looking for? Browse other questions tagged ceiling garage joists or ask your own question.

1
Question about framing a lowered ceiling (like a large soffit.)

1
How can I add joists to an existing trussed ceiling?
0
2x6 deck joists: salvageable or need replacing?
1
Can I use a 2x6 beam stretched across a few of these roof rafters to support a hammock?
2
How much weight can my garage's ceiling joists support?
3
Can I remove ceiling joists without risking the integrity of my roof system?
2
How to fix sagging ceiling?
0
Why would my garage have separate ceiling joists suspended below larger floor joists?
1
Add storage to hidden attic space above garage?