How long and tall does a shower wall need to be to protect against overspray?

We're designing a curbless shower right now and would like it to be doorless. The design would have the showerhead on the West wall, and the entry along the East side of the North wall. This general sketch should help:

The East and West walls are 34" and the South wall is 67". The North wall is currently the one we're not sure what to do with.

How long does the North wall need to be? If there is no code for this, then what length should it be to properly protect the rest of the bathroom from overspray? Related, does it need to run up to the ceiling or can it be just a few inches above the shower head for a more open feel?

In case anyone is curious or it's relevant...

Our main concern is that we would like to add a bench along the East wall (or possibly a corner bench), but need to make sure the entry opening is big enough that it is not uncomfortably blocked by the bench. So we are attempting to minimize the length of the North wall.

The interior of the shower will be tiled floor to ceiling. Remainder of the bathroom will be paint over greenboard. The shower will be a curbless entry, preferably without a curtain. We've already accounted for sloping the floor to the drain.

I don't mind a small amount of water spraying the first foot or so out of the shower entry, as long as we're not talking about a puddle.

First off check your local codes to see if you have to comply with the ADA or other codes.

Otherwise, the width of the opening to enter the shower will dictate your wall length. Personally I wouldn't want anything smaller than 32" but that might just be me.

The height should be high toward the shower head and could be a little lower further out. Some of it depends on how tall you are. Shorter people would cause less spray up high.

I would say not less than 6 feet high but then, that might just be me again.

Your question-asking and diagram are great! Unfortunately, i can't fully conceptualize it right now (too hungry), but I hope this post gives you helpful info re: wall height. Here's a pic of my parents' shower stall, which we designed together: 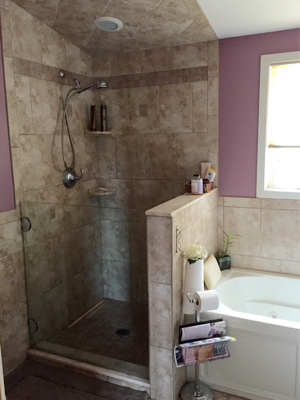 I hate curtains and convinced them an "open concept" shower would be cool. They planned for a full-height glass door & wall, but the factory messed up the specs. When the half-door arrived, I was like "that's perfect"! And it was!

They're both about 5'5" and have lived (& showered) there for over 10 years and there's no ill-effect from the open shower (the floor is tiled the same as the walls). Water does pool a bit on the bottom ledge (inside) during a shower, but is stopped by the gasket. My mom says "We squeegee the glass door & bottom ledge after every shower". Their door is always clean, too. No spots. I asked her for a pic and she took one immediately, so this is what it looks like everyday.

I don't think the wall height has to be really as high as many think; however, I'd imagine showerhead placement and flow pattern (& pressure?) might alter the actual splash zone.

I'm sorry i'm not there to measure, but you can get an idea from the pic. The bathroom, overall, would be considered small-to-medium sized. In addition to what you see, there's a small toilet, pedestal sink, pocket door, and small swing door leading to their bedroom.

Re: the bench - you could always consider a nice "portable" bench (like a beautiful wooden or well-made plastic one), so you'd have a bench option, but take it out when not needed. I have two built-in bench seats in my shower and i never sit on them (ew?) but they're a great spot for collecting less-used products and water-spots. While they're handy for shaving and storage, my shower would feel much larger w/o them.

I got the concept for my dream shower from my aunt & uncle in FL, who had a curtain-free, full-height stand-up, tiled shower. Theirs looked similar to your diagram, but had a few step-downs around a corner, like between your drain and bench. I suspect this helped to contain bottom pooling water, as well as allowing for a shorter exterior wall. Their stall was rectangular, like yours, and did not have a door of any sort. I hope to have a bathroom like this, someday, too, and never buy a shower curtain again. 😄

Not the answer you're looking for? Browse other questions tagged bathroom shower or ask your own question.

3
What is the easiest way to tear out a bathroom subfloor?
4
Need guidance for venting a new rough-in for basement bathroom
1
Bathroom drainage: bath's water flooding shower
0
Plumbing issue throughout house - gurgling coming from shower, bubbling in toilet, standing water in drain of shower
1
Shower arm - thread sticking out of wall is too long
1
Slow drain after tub-to-shower conversion
2
How smooth does a shower pan need to be?
1
Fill the gap between shower wall and splash guard