I recently hired a plumber for a tub-to-shower conversion into a first floor (slab) master bathroom. I had already removed tub and demo'd the walls, so the scope of work involved:

Number 1 was pretty straight forward. Number 2 was also straight forward, although I wasn't sure about the Fernco to adapt the 2" PVC to the existing 1.5", but he assured me this was standard practice: 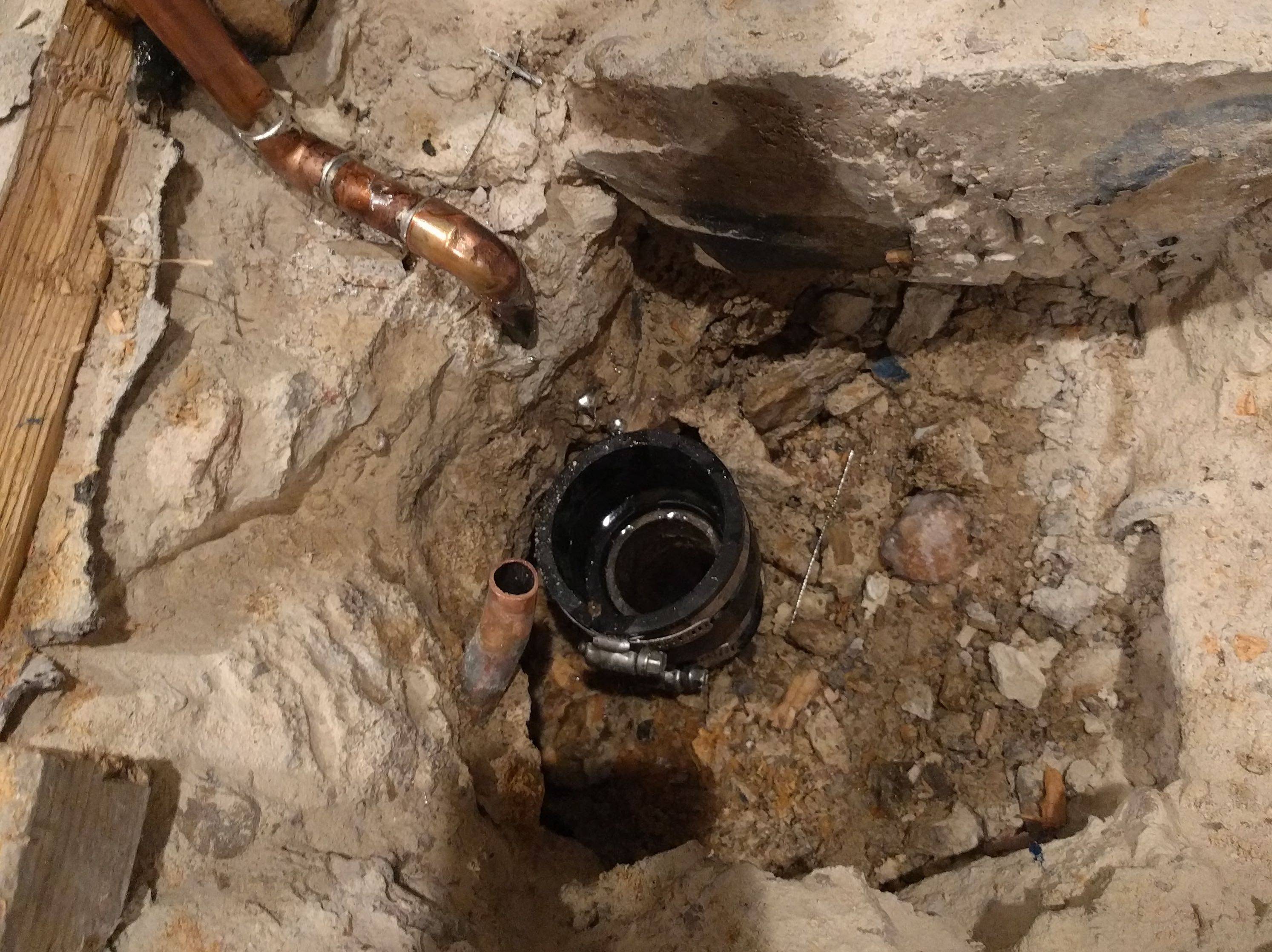 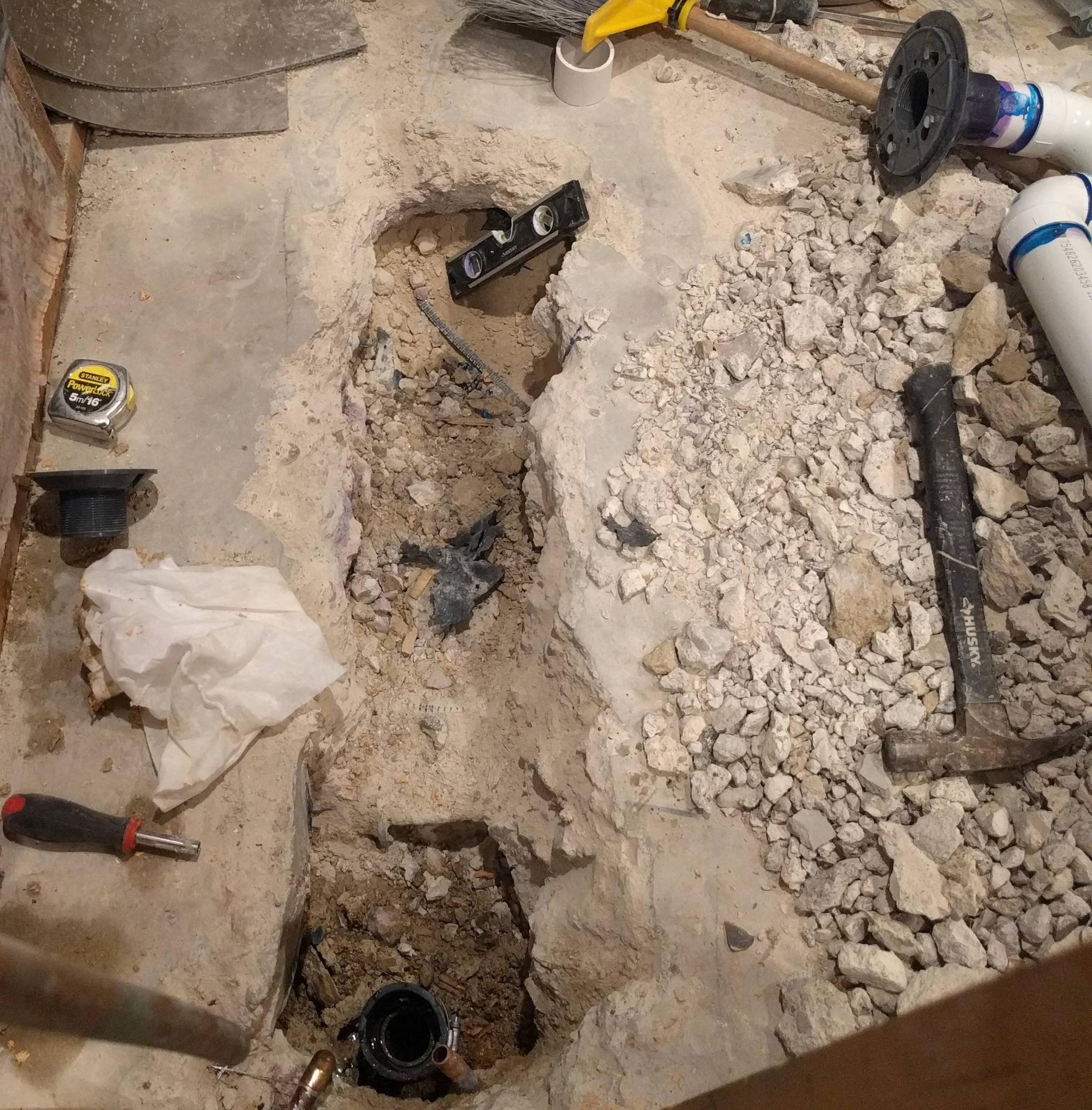 I was happy with how everything turned out initially, and after tiling we started to use the shower. But we noticed something strange: for the first minute or two, the water would not drain fast, and would start to puddle (~1"), but then all of a sudden all the water would drain and it would stay that way for the duration of the shower (ie, no puddling at all near the drain). It has been about 4 months and now the 'puddling phase' lasts more like 4-5 minutes and gets deeper, but then, like magic, it all suddenly drains. We used the bathtub as a shower for years and never had any drain issues.

Other things to mention:

My main questions are:

UPDATE (01/25/18): I have contacted the plumber who did the work. I told him about the "double trap" theory, which totally makes sense to me. However, he is not yet convinced as he says he "has done hundreds of tub-to-bath conversions and never had any issues if there was a tub trap in the slab." He thinks it is some type of obstruction in the line, and will come out and run the line to try and push out whatever might be in there. My engineering/physics mind makes me less optimistic than he is, but I hold out hope since it is, by far, the easiest solution. Fingers crossed, and I will update soon.

Another UPDATE: The plumber finally came out (he was battling flu). He contended that there should be no problem with having a new trap as part of the shower drain which feeds into the slab where there is (presumably) another trap...as long as there is a down-stream vent, which there is. However, I was really skeptical since what Josh said below made sense from a physics point-of-view. His thought was that there was simply some blockage somewhere; which again didn't make sense since the water drains well after running for a few minutes. He proceeded to use his auger to try and clear out the blockage. Well, we were all very surprised when he pulled out a 4" piece of 1/2" copper all wrapped up in a big hair-mess. WTF? It must have fallen in the drain when he did the original work, and the only explanation to why it drains well after a few minutes is that it somehow "floats to the top" or whatever and gets out of the way. Not sure we'll ever really know why, but now the system drains well, no problems at all. I don't really care since I won't have to redo things to fix it. :) Just thought I'd post in case anyone comes across this and wonders about this same type of problem.

You should have a trap generally the trap would be with in 8 to 12 inches of the drain. The trap prevents critters (at least partly) and sewer gases from entering the home from shower drain.it sounds like you have an AIR Bubble and until that gets filled - it acts like a blockage. Next time get a bucket of water and force it into the drain and then see how fast shower drains.

It is possible it could be a venting issue you are not up the creek. You mention the Toilet being close by and I would guess the two drains are connected and the vent for the toilet exists, so you might need to enlarge it or see if by chance it has become clogged.

Also given that you dug all of that out check that pipe for clogs and also your venting pipe where it meets the toilet drain it is very possible you have a piece of debris stuck and it rolls around a bit and out of the way after it 'floats' (moves).

If you didn't take out a trap it is likely in the ground, and the shown section added a second trap, having two traps in line is the problem, it is called double trapping.

The air in between the two traps is stuck and requires some pressure to clear and start the water flowing, provided by your build up of water in the shower. This region between the traps is also more likely to accumulate material and clog, which is likely why it is getting worse.

It can be fixed by venting between the traps, or removing one of them, but since they are both in concrete it is not an easy fix. Short term you could try and snake the drain or use other methods to try and clear debris to improve drainage, but it is going to be a problem.

Did the plumber use the correct device fernco coupler, Yes fernco couplers are very common for pipe repairs and modifications. Why is the drain running slow , the tub drained fine, I think you guessed this one correctly that the drain did have a vent because of the tub, now the syphon needs to get started then it drains even 1 inch higher would make a big difference and tubs are usually set slightly higher than shower pans.but if double trapped it makes sence to me that it has a tougher time getting started each 90 creates resistance to flow and the trapped air in between is the problem unroll the syphon starts.

2
Why is my shower drain blocked for several minutes before draining?

7
Is my shower drain leaking under the slab?
1
What can I do about a jammed tub drain plug?
2
Is a P-trap required for a shower drain?
5
How can I vent a bathtub trap when the drain is routed under the tub?
1
Tub drains very slow
2
Tub to shower conversion plumbing questions
2
Why are shower drains 2", but tub drains 1.5"?
2
Changing basement tub drain to shower drain - double 90 degree while horizonal, is this bad?
2
Slow water drainage, then air bubbles from shower drain