How is a Phillips screwdriver size determined?

I have two different sized Phillips screwdrivers that both say they are 00 sized (click here for full-sized image): 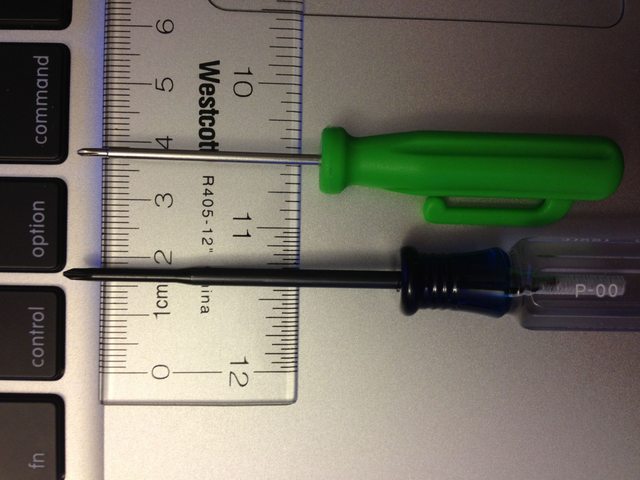 The green screwdriver came from an iPhone 3/4 disassembly kit, and on the package it says "Phillips#00". The tip is about 1.5mm wide.

The screwdriver on the bottom is a Craftsman and it says "P-00" on it. The tip is about 2mm wide.

One of these screwdrivers cannot be 00 sized. Which one is 00, and what size is the other one?

The Phillips screwdriver size is based on the size at the very tip. Based on diagrams of the tip from the original Phillips patent (shown in one of the links to sizes.com), I'm guessing that the relevant physical size is the cross you see when you point the screwdriver at your nose (as though it were a screw) and look at it end-on, or something directly related to that. How much the tip widens to become part of the shaft is irrelevant. You could make one that widens to a meter in diameter, making it nearly impossible for humans to use.

I tried this experiment: using some digital calipers, insert just the tip between the calipers, and measure the distance from one point on the cross to the opposite point. This is difficult to do accurately since if you insert a little more than the tip, you get a result that is too large. I tried several different sets of screwdrivers and bits for them from different manufacturers.

A serious attempt to make these measurements would probably require several vices, a powerful magnifying glass or a microscope, and digital calipers with a thinner edge than the set I have. Either that or I'd need about 6 hands.

Somewhere buried in an ANSI standard is the physical dimension that determines the driver size. I may have found one of them, but it costs $65.

00 refers to the size and angle of the tip. It doesn't say how thick the tip becomes before merging into the shaft. So, yes, these could both be 00 sized, if they fit the same screws; the thicker one just (a) will fit larger 00 screws better than the small one would and (b) won't fit into as small an opening.

Phillips screwdrivers are not sized based on the physical dimensions of the tool itself. Instead, they are sized based on the screws with which they fit. Each size will work best with a range of screw sizes, which means the actual size of the tip can vary slightly.

This chart can vary slightly, depending on the type of screw being driven

The screwdriver point size will fit different size screws, depending on the type of screw (wood, machine, sheet metal). The point size of the bit is determined by the diameter of the tip. You can measure the tip easily using a vernier caliper. Specifications for the bit size can be found here: http://www.leisto.com/screwdrivrer-bits/phillips-screwdriver-bits/

Not the answer you're looking for? Browse other questions tagged tools screwdriver or ask your own question.