Removing kitchen sink strainer with no lock nut and no threads,, only thumb screws and a metal ring

One of the strainers in my kitchen sink (the side without the garbage disposal) started leaking in the putty/gasket area. After seeing a bunch of videos about how to replace it, I attempted to do the same. However, while all videos talk about removing the lock nut and having that be the hardest part, I went and got a lock nut wrench and prepared to remove the old part. To my surprise, my existing strainer doesn't have a lock nut at all, and there are no threads other than the one for the coupling nut at the very bottom. There are 3 thumb screws that appear to hold the strainer in place. The problem is that the thumb screws go through a metal ring, and while the metal ring has slots for what could be a screwdriver, that metal ring won't budge at all. After removing the thumb screws, it is possible to move the strainer, but only as far as it goes until it reaches that metal ring. See pictures below. You can even see that the metal ring isn't exactly straight, but all my attempts to get it to budge (with vinegar, with WD-40, etc.) have not been even the slightest bit successful.

Any ideas, short of trying to cut the metal ring with a hacksaw? It would be a bit difficult being how close it is to the sink. 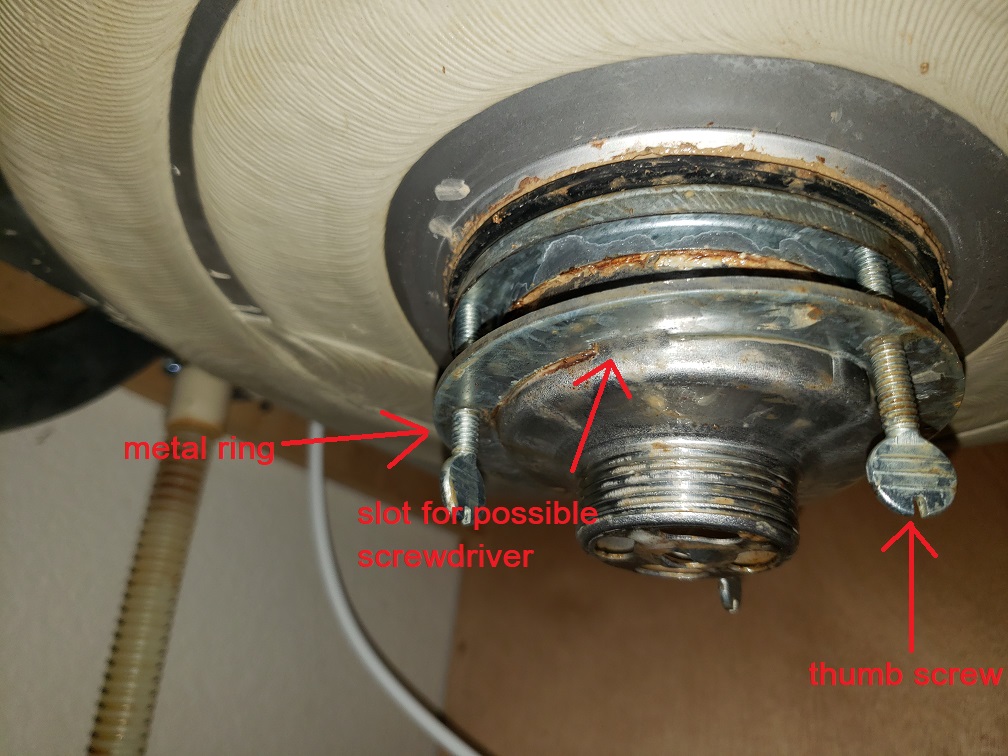 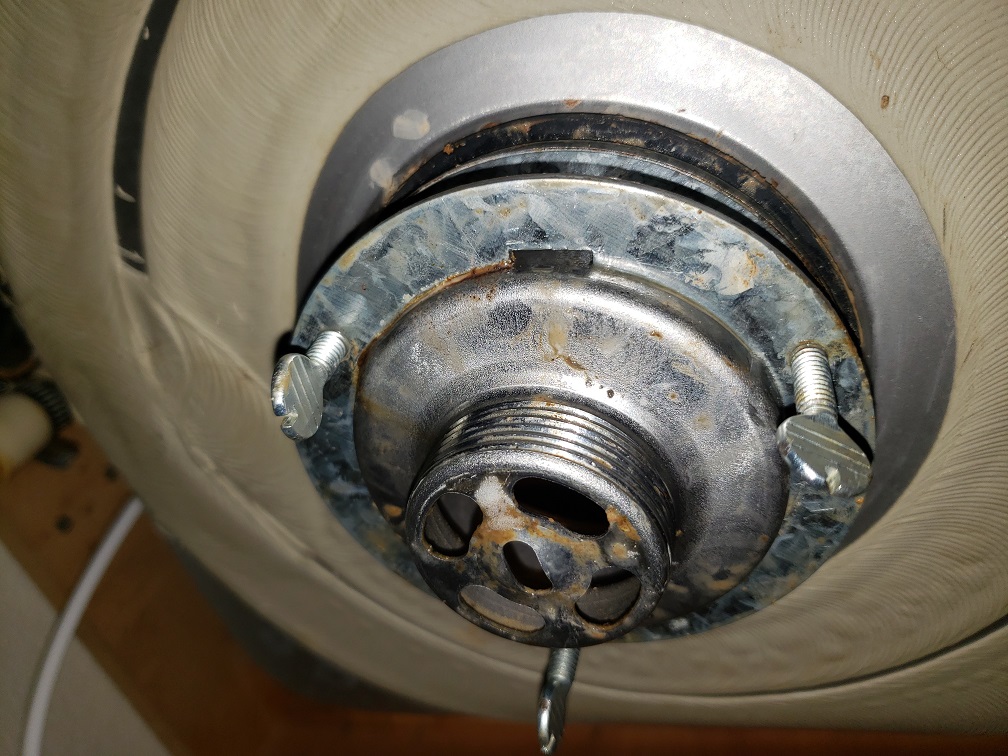 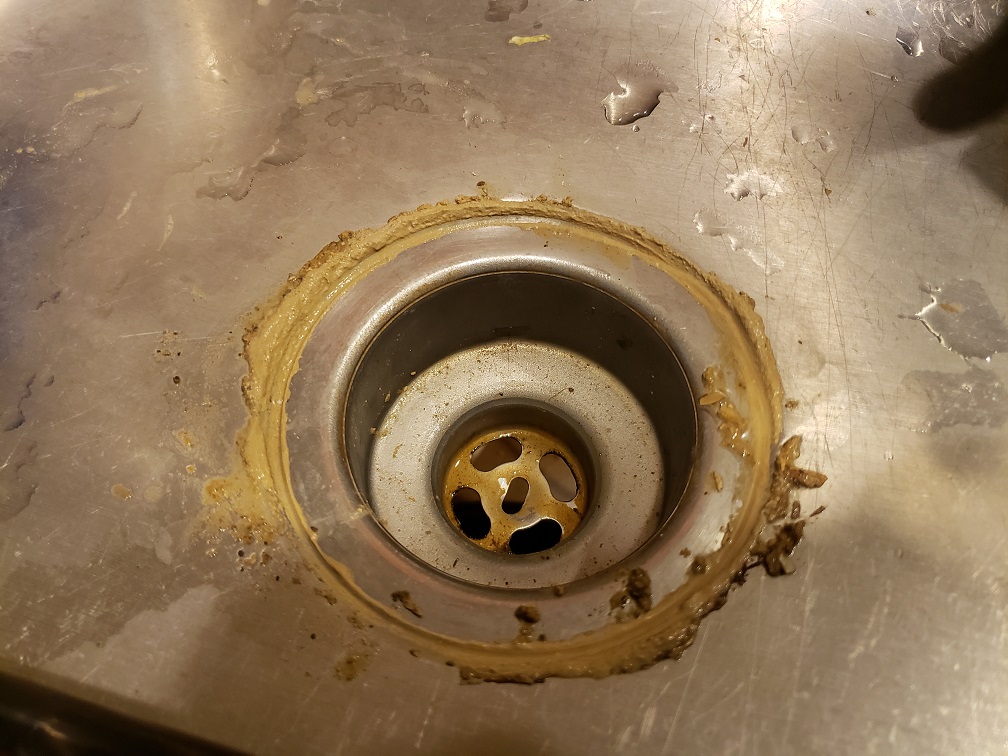 I finally got this strainer removed. First of all, thank you all for your suggestions. It was all somewhat correct. It had to do with lining the slots up with the notches.

After struggling with this a bit more and almost trying to pry it off as a last resort, I called my plumber. Luckily, I have a plumber who asks for pictures and then gives advice, allowing me to attempt to fix it myself. He says to only tell him to come over and fix it if I am really stuck (pun intended).

He also said that the metal ring should normally rotate, but since the installer didn't tighten all the thumb screws evenly, it led to the crooked angle and made it so that over the years, it became even harder for that metal ring to budge. Furthermore, the slots were moved so far away from the notches that it would take a bit to get it back to being lined up.

He highly recommended against using brute force and trying to pry it off, as he said since I had a stainless steel sink, it can bend the opening for the strainer and cause me more problems later.

Instead of removing the thumb screws completely, it should just be loosened so that the metal ring can move (and so that the washers won't come down and block me). He said the best approach would be to have 2 people. One person would have to hold the strainer in place from above, while I would be hitting it with a hammer from down below. He said I can either hit the ring so that it wouldn't be at a crooked angle anymore and then try to line it up, or I can just try to keep it in place while hitting the thumb screws with the hammer in attempt to cause the metal ring to rotate little by little until it lined up. Since I didn't have 2 people, I opted to just hold the flange from the bottom to try and keep the strainer from moving as I hit the thumb screw with a hammer. Slowly, it began moving. After it was lined up, it still took a bit of effort to pull on it, but it finally came off (pictures down below).

By the way, my plumber recommended just replacing the putty and the gasket. He said that from seeing the picture, I had a decent strainer and that the newer cheap ones would rust within a couple of years, whereas this one was better built and would last longer than that. I cleaned everything off and did that this evening, and everything works fine and leak-free now!

Again, thank you everyone for your responses. 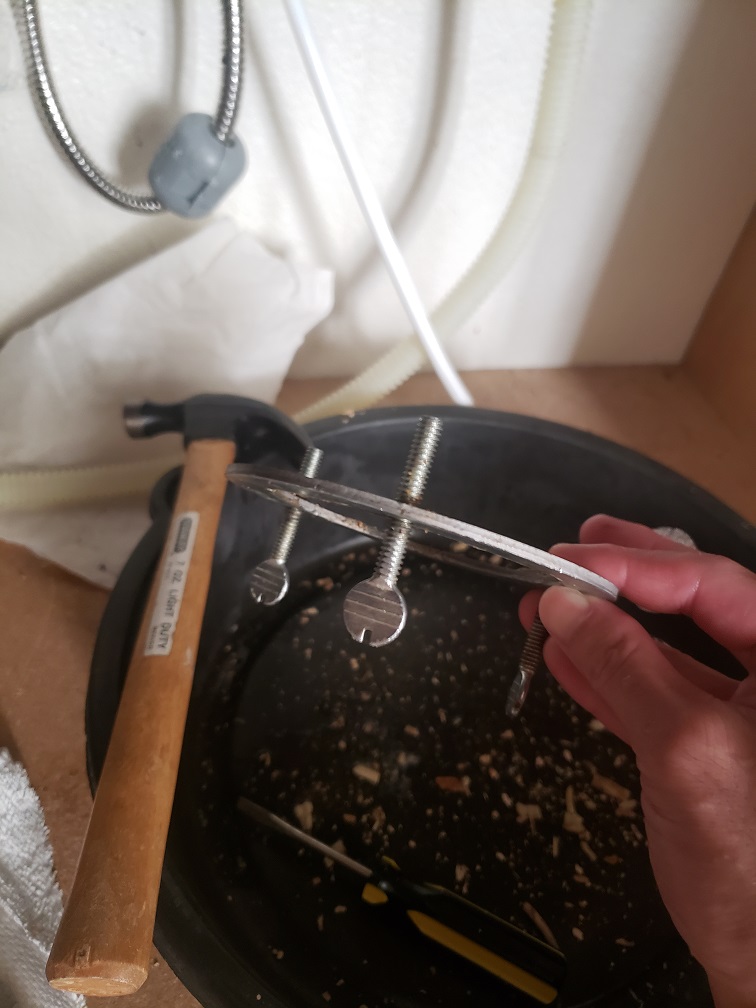 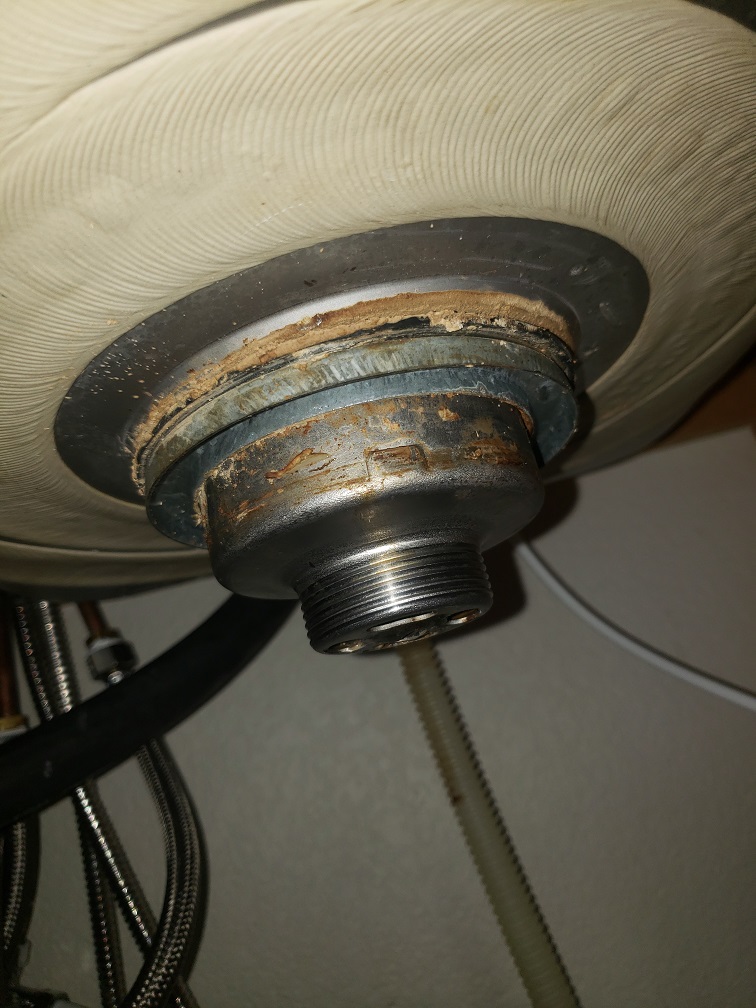 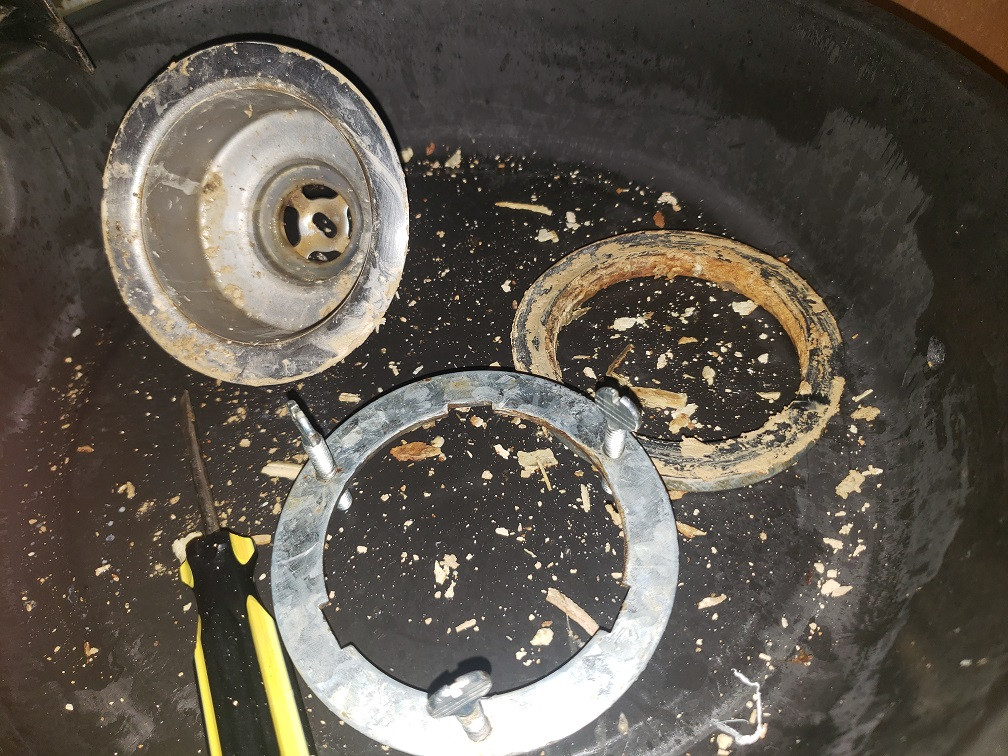 I think I see what's wrong. Somebody put the metal ring on wrong in the first place. The notch in the ring that you can see at the top of your photo is supposed to mate with a bump on the strainer. Looking at the thumb screw on the right, you can barely make out such a bump next to it.

By putting it on like this and screwing it down, the ring is now pressed onto the strainer really tightly. I think your best bet is going to be to try to pry it off. Try putting the nose of a hammer between the sink and the metal ring to get some leverage. You might have to put some shims under the blunt end of the hammer for this to work.

(In general, tight-fitting metal rings can be easily removed by heating them up to make them expand, but that's likely impossible in this case due to the limited space and because all the heat will immediately flow into the strainer as well.)

I wouldn't re-use this strainer. I've never seen one designed like this before. I think the idea is the notch you highlighted slips up over the protrusion that I highlighted: 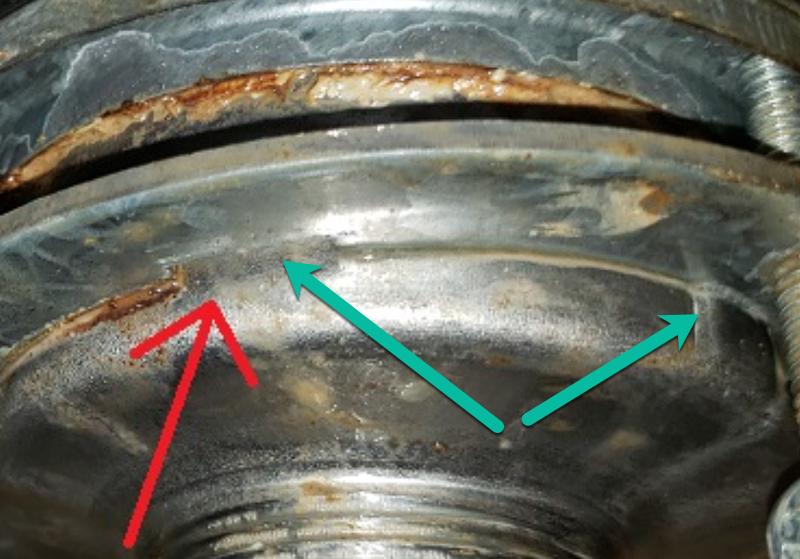 Here is a different design where the plate bearing the thumb screws is held on by the drain threads rather than by little notches. This tends to work well. 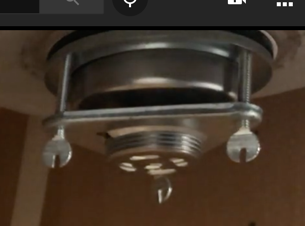 If you think your old one is higher quality, keep the parts and if the new one does start rusting you can maybe mix and match the parts. The old basket and ring with the new thumb screws and their triangular plate.

2
How to keep my sink from coming loose?
4
How to replace my kitchen sink basket with no lock nut?
2
Reconnecting sink drain
1
Preventing a sink strainer from leaking?
4
How to seal straight-thread faucet shank / nipple to the faucet?
2
Brand of kitchen sink with crown logo and CSA stamp
2
What is this black rubber irrigation system seal called?
0
Any idea how to remove this metal slip joint nut form kitchen sink pipe?
1
Sink basket drain no luck nut stuck