It's downstream of a dimmer

There are three dimmer technologies. Variacs are a variable transformer which steps down voltage, giving a sine wave, but they are huge and heavy. Rheostats are a variable resistor that adds impedance, giving a sine wave, but they make stupefying amounts of heat. Both of these, being sine waves (as in (a) below), produce a 60 Hz electro-magnetic field. (50 Hz in the rest of the world). Which is what that tester is designed to detect. However both those dimming methods are totally impractical for the home. 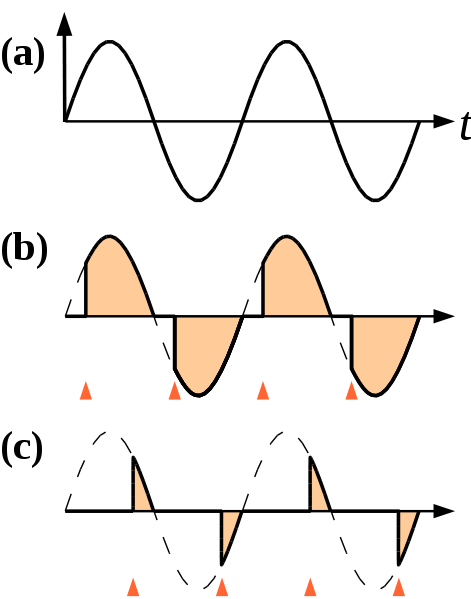 So a third method is used: semiconductor dimming, which uses electronic switching to alter the sine wave (as in (b) and (c) above). However, nature likes sine waves, and nature will treat a mutilated sine wave as if it were a conglomerate of various sine waves summing up. The science of this is called "Fourier analysis".

Which sine waves sum up to (c)? Many of them, at odd multiples (3x, 5x, 7x, 9x etc.) of the base frequency. So 180 Hz, 300 Hz, 420 Hz, 540 Hz, 660 Hz. and so on. Janky shaped waves can create lots of these and they can be strong. Depending on the setting of the dimmer, these other frequencies will have different strengths, and depending on the room, will propagate certain ways.

The tester's sensitivity to these harmonics will depend on its own design.

I bet all these factors are lining up in a way favorable to detection.

In that kind of distance strong electromagnetic field may caused if the feed and neutral do not run close together. Bad practice of wiring from not enough qualified electricians. Feed and neutral to load may be in different conduits.

There are different classifications of testers with different sensitivity.

An example of this is a tester used for hvac circuits that will detect 18vac.

The 18v tester will detect 120v from almost a foot away so I think that may be what you have.

My standard non contact tester is 90-1000v but if I have it turned on when I open my transformer vault 34500v it goes off. Similar but different ranges based on the sensitivity of the tool.

There may be phantom voltages coupled-in, and especially apparent when the circuit is off.

Testers can be quite sensitive, and your phantom voltage can be as high as half the line voltage, so 60V.

These are not necessarily an electrical problem, but could trip your tester.

To check for this, temporarily add a low-impedance passive load at the end of your run. An old fashioned 10W (or more) incandescent bulb is enough. The point is that it should draw a current even if the supplied voltage is coupled. Many modern devices, like LED drivers, draw next to nothing if the voltage under-load is below a threshold, thus keeping coupled charges on the line. If you don't have such a bulb handy, you can experiment with other loads. Whether they'll accomplish the trick depends on their electronic internals. Usually old fashioned appliances would work: incandescent bulb, fan, hair dryer, toaster, mixer, maybe radio, CFL bulb...

Safely wire up an outlet at the end of your run and plug in a load.

Phantom voltages that trigger a tester can arise from capacitive, magnetic, or electromagnetic coupling. The voltage or current is coupled from other wires or electrostatic charges in drywall/insulation when the circuit is off, since the charge has nowhere to go.

Not the answer you're looking for? Browse other questions tagged electrical wiring afci or ask your own question.

0
Outlets and lights don't work but plug-in receptacle tester indicates all ok
0
Limits to load connections for AFCI/GFCI Outlet
1
If a GFCI tester trips a circuit breaker is there a problem
2
Which is the hot wire, neutral wire and ground wire?
0
Open ground on all outlets, voltage meter beeping on metal boxes and MC cable
1
Outlet tester results for open ground on mixed circuit
0
Open ground indication on tester when connecting appliances to any outlet on same circuit
3
Cut cable tripped breaker and left circuit dead after reset
0
Wiring a blank face afci, gfci and a regular outlets in a circuit, made a loud noise in gfci box