Wiring a blank face afci, gfci and a regular outlets in a circuit, made a loud noise in gfci box

I've a new basement kitchen 20amp circuit (with regular 20 amp breaker) that has a blank face AFCI (near the panel), GFCI outlet (first outlet in the kitchen) and regular outlet at the end (used a 15 amp in a 20 amp circuit for testing purposes only. Did not have a 20amp outlet). See picture below to see how I wired them (note: AFCi was blank face).

If the picture does not show the correct way to wire, how to do it. A picture is better, with explanation. 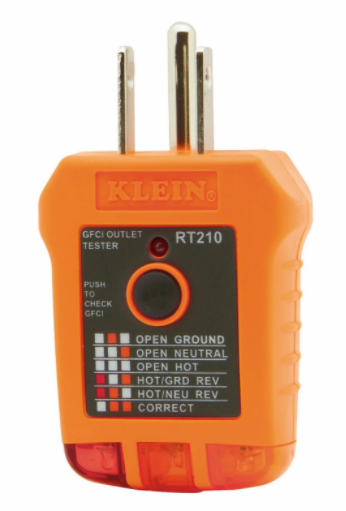 Remember: the run from service panel to first AFCI must be either metal-jacketed cable or metal conduit.

I would find that drawing very confusing. It's always a struggle to show neutral on a white background (hint: don't), but what ere they thinking? White is the legally required neutral color, and black is the conventional hot color. So that bung drawing is certainly inviting a hot-neutral reverse sort of mistake.

Anyway, it sounds like your "ka-boom" happened either due to a wiring error, or due to a ground wire touching a hot terminal screw on the "Line" side (if it was on the "Load" side the GFCI would've tripped obviously). It became a "race condition" between the AFCI detecting an arc fault, the circuit breaker tripping for overcurrent, or the short condition burning itself out. It sounds like the latter won.

Those 3-lamp testers are rather useful for doing 3 "neon light tester" tests simultaneously... but the sticker's opinion of what the problem is, is so laughably wrong that I call them "Magic 8-ball" testers. 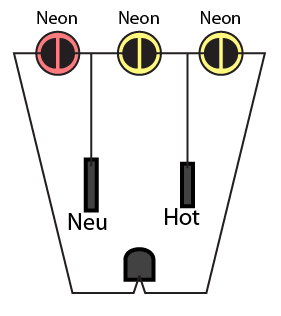 What you have is outer yellow (hot-ground) and red (neutral-ground) lights lit. That is a typical sign of a lost neutral, with a load plugged in and turned on that is effectively connecting the hot to the dead side of the neutral.

Here's that drawing, fixed. The creator of that drawing should not be giving AC mains wiring advice in North America.

Not the answer you're looking for? Browse other questions tagged electrical wiring gfci afci circuit or ask your own question.

11
What could be causing AFCI breaker and GFCI receptacle nuisance tripping?
9
Should I use a GFCI or AFCI circuit breaker with knob and tube wiring?
2
GFCI/AFCI Trips With No Load And New Wire
1
GFCI Circuit Breaker 'Test' works, but doesn't trip with plug tester
1
Upgrading apartment: GFCI/AFCI breakers and wires
0
Duplex outlets in series AND parallel after GFCI
1
How can I correct my wiring to eliminate sequential GFCI outlets?
1
Outlets and lighting on covered patio - 240V to 120V
2
AFCI / GFCI Circuit failure