Should frameless glass shower door hinges be screwed into the wall at an angle?

I recently had shower glass & door installed - but the shower door hinges have their screws (ones that go into the tile wall) are screwed in at an angle, so they do not sit flush against the hinge. 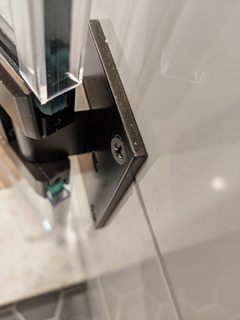 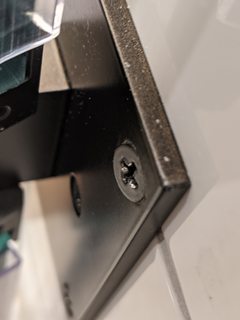 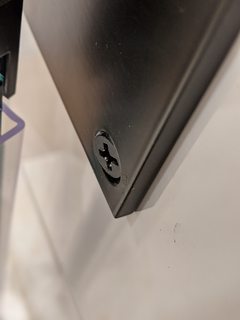 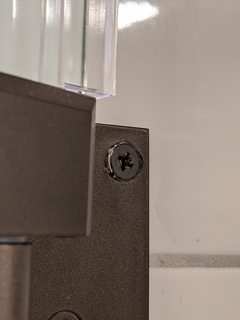 All the screws are this way except the center one, I am wondering if this is normal?

I asked the guy who installed it, he said it is purposefully done that way so that it would be able to withstand the weight of the glass door.

Some details of the project:

Any of you know if this is normal?

Any of you know if this is normal?

I would say not normal.

Looking closely at the photos i would say that if the manufacturer had wanted the screws to be at an angle then they would have set the countersinks in the brackets at that specified angle so the heads did not stick out proud of the bracket, They did not. The countersinks are straight so therefore one can assume that the screws SHOULD go in straight.

I would surmise that the installer is feeding you a line to cover his mistake.

Any screw installed at an angle will not be able to handle the sheer load vertically of the weight of the shower. Once it loosens and it will it will pull at a much greater rate too. Just no way.

If this was a retrofit, and the bathroom hasn't been torn down to the studs, my guess is that this is just how things worked out.

Probably the location where the door needed to be installed aesthetically or to make the shower leak-proof was ever so slightly NEXT TO the stud. It looks like there is one screw more towards the center of the hinge, which looks like it goes in straight. The other ones probably had to be angled slightly in order to hit the stud, or they would have just gone into drywall and wouldn't be doing anything at all really (other than probably pull your tile off the wall).

If you were fully redoing the bathroom, including removing drywall, there would have been an opportunity to place more solid blocking where the hinges needed to go, but if that wasn't the case, the next base thing would be doing this, over having the screws not hold the door up at all.

You haven't given us many details about this project, so this is just a guess of course.

Not the answer you're looking for? Browse other questions tagged doors shower hinges glass or ask your own question.