This glass shower door was installed in 2013. The top hinge has worked itself loose three times over six years. It's not pulling away from the wall; the internal hinge is coming apart. Is this a common problem? What causes it? Is it a defect in the hinge? Did the installers choose a hinge that was undersized for the weight of the door? My guess is that the threads of the screws are too fine for the weight, and need to be one size up.

NOTE: The picture gets rotated during upload. Not sure how that happened.

EDIT: I've looked closer and believe the female threads in the wall-plate of the top hinge are stripped. When I grab the outer edge of the glass door and lift the door slightly up and a little towards the wall that the hinges are mounted on, I can see the screws disappearing into the wall-plate a couple of threads. They seem awfully fine threads, given the weight of a 29 x 62 x 3/8 glass door.

EDIT2: What I was noticing with the movement of the screw was not a stripped female thread at all, I was wrong about that; it is evidence that the head of the screw is on the wall side of the plate, as @Michael Karas notes in his answer. 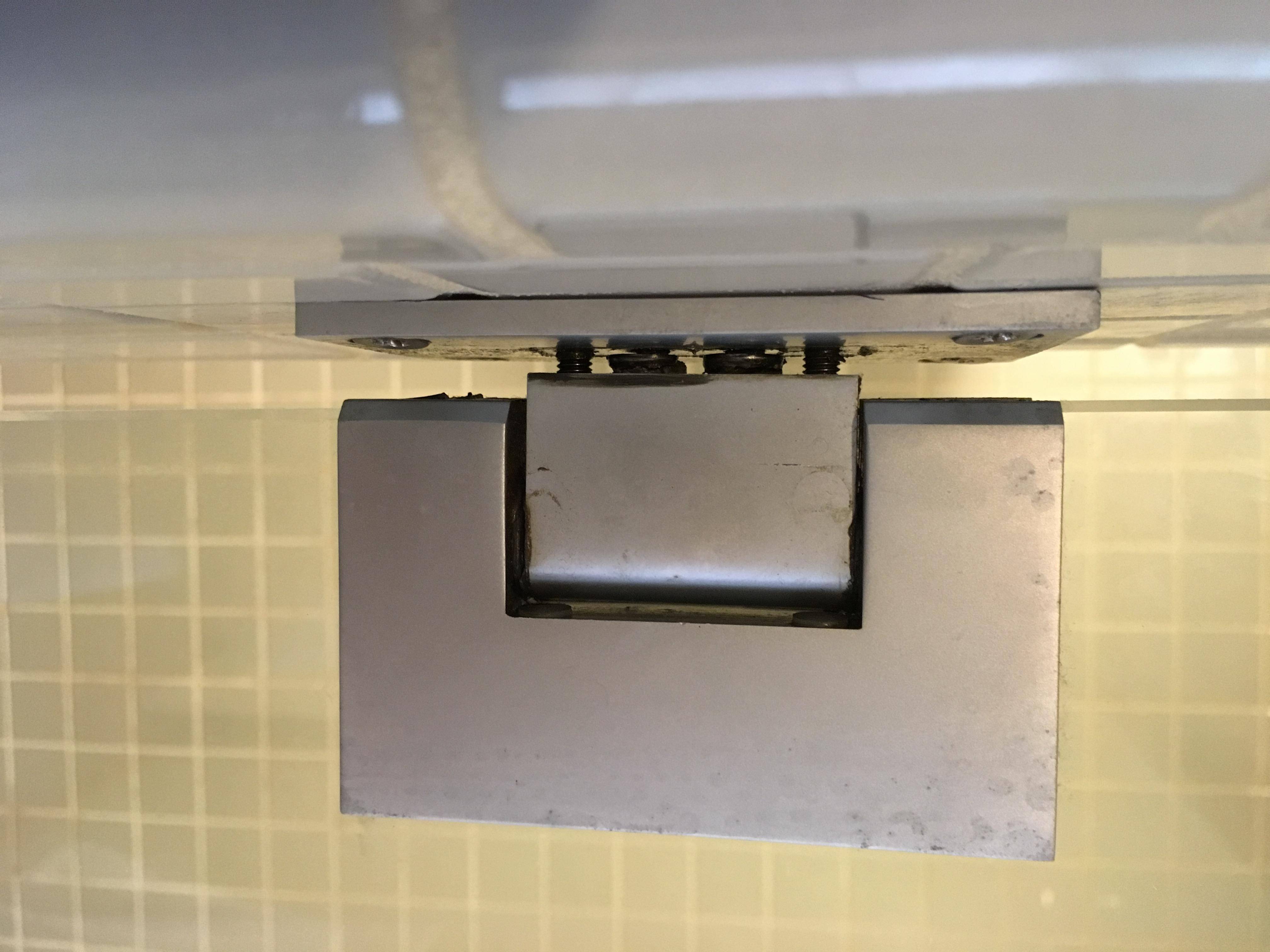 You may want to consider the use of a thread locker product on the threads of the screws that are coming loose. This type of product comes as a thick liquid that you apply to the threads before assembly and then it dries/sets up to help bond the screw into the mating part. You should be able to get thread locker from most auto parts stores and well stocked hardware stores. One well known brand is LocTite.

Before applying the thread locker do clean the screw threads because in a shower application like this there could be a soapy deposit on the screws.

It is hard to say what the cause of the hinge screws coming loose would be. A common reason is vibration in the hinge assembly. It is possible that due to the weight of the glass door on the hinge assembly creates a low level of vibration each time the door is open and closed. From your picture the top part of the hinge has a metal to metal tight contact that could probably use some lubrication (the right side in the rotated picture) to reduce the chance of vibration from occurring.

You really do want to have a helper to hold the door steady as you remove the screws from the corners of the wall plates. The best advice here is to work out some strategy to place some support under the bottom edge of the door that holds it up just at the correct height. This should support the bottom when the door is in a position that is at right angles to the wall. Such support should be at both the bottom corner near the wall and the other bottom corner of the door. It may be necessary craft up something made with wedges, paint stirring sticks and small blocks of wood. Since this is most likely the nominally "closed" position of the door these supports may very well need to work in conjunction with the lower frame or threshold of the door.

When the door is in the supported position it should be possible to access the corner screws of the wall plates. With the door properly supported the wall plate screws should be able to be removed without putting any strain on the partially removed screws. You should aim to remove both hinges so that the whole door can be moved to another position while you work on that upper hinge. Another thing to consider when removing the wall plate screws is that since the door is in the "closed" position you will need two people, one inside the shower and the other on the outside to be able to work on removing the wall screws. One can hold the door while the other removes the screws on their side and then exchange roles.

Once you complete the work of securing the hinge screws from the back side of the wall plates you can reposition the door back on the supports and slide it back into position. Basically reverse the procedure that was used to remove the door to once again getting it secured to the wall.

You say "3 times", so you have been able to re-tighten the screws and then they work loose again...

I would be looking for the Loctite brand but there are others. Be warned, there is a "very" strong grade which if used on small screws (small being less than M8) they tend to break before coming undone...

I am assuming that the threads in the hinge and on the screws is not damaged. If either is damaged then that has to be sorted.

Based on your last edit just go to your home store and pick up a tap and drill for a larger screw than you have holding the door now. Remove the door and wall plate, drill and tap the holes and replace with new stainless screws.

Not the answer you're looking for? Browse other questions tagged bathroom glass hinges or ask your own question.