How can I frame a four-sided cantilever on a 10x12 freestanding, floating deck?

(Update a year later at the bottom)

To try to keep the background short and to the point: I live just outside of Atlanta, GA and am looking to build a small (10'x12') on-grade freestanding deck behind my house. I'm not allowed to dig footings or do anything that couldn't reasonable be reversed. My yard is extremely hard-packed clay (difficult to dig with a pick/mattock... easiest to dig with a hammer and masonry chisel...). The house is essentially at grade; the back door sill is 3" above grade, with a 48x60" concrete pad in front of it that meets grade on the side opposite the door. The yard is sloped up from the house (i.e. sloped towards the house) on a 6% grade, so there's an approx. 7.5" difference in elevation between the diagonal corners of my proposed 10x12 deck. I'd like the deck to be as close to grade as possible to minimize the height closest to the door.

I have a fair amount of construction experience, but I've never designed a project like this myself, without either plans or someone much more experienced in the lead.

My original design plan was for a 10x12' rectangle framed with 2x8" ground contact SYP common joists and end joists running in the 12' direction, connected with joist hangers to 10' headers of the same 2x8" SYP, and topped with 5/4 x 6" SYP decking running perpendicular to the joists. The plan was to rest this on solid concrete block (standard 8x16" blocks, in either 2" or 4" height, doubling up using construction adhesive where needed) that would be set directly on-grade, or slightly inset into the clay soil and evened out with leveling sand as needed.

Thanks in advance for any thoughts/advice!

isherwood's answer below was PERFECT. 10 months later and I couldn't possibly be happier with the deck. The blocks are all set back 12" from the rim joists, and the deck is rock-solid (at least as far as a relatively small, low deck is concerned). I'd done some calculations on soil load in my area, and the four blocks seem to be in exactly the same place 10 months later, despite some very heavy rains. By far the most time-consuming and difficult part of the build was getting the four blocks/piers set in exactly level (well, close enough that I couldn't see light between the blocks and doubled joists) with each other and square.

Here's a photo of the framing (minus joists for decking) and blocks, and two of the evening that I finished the deck: 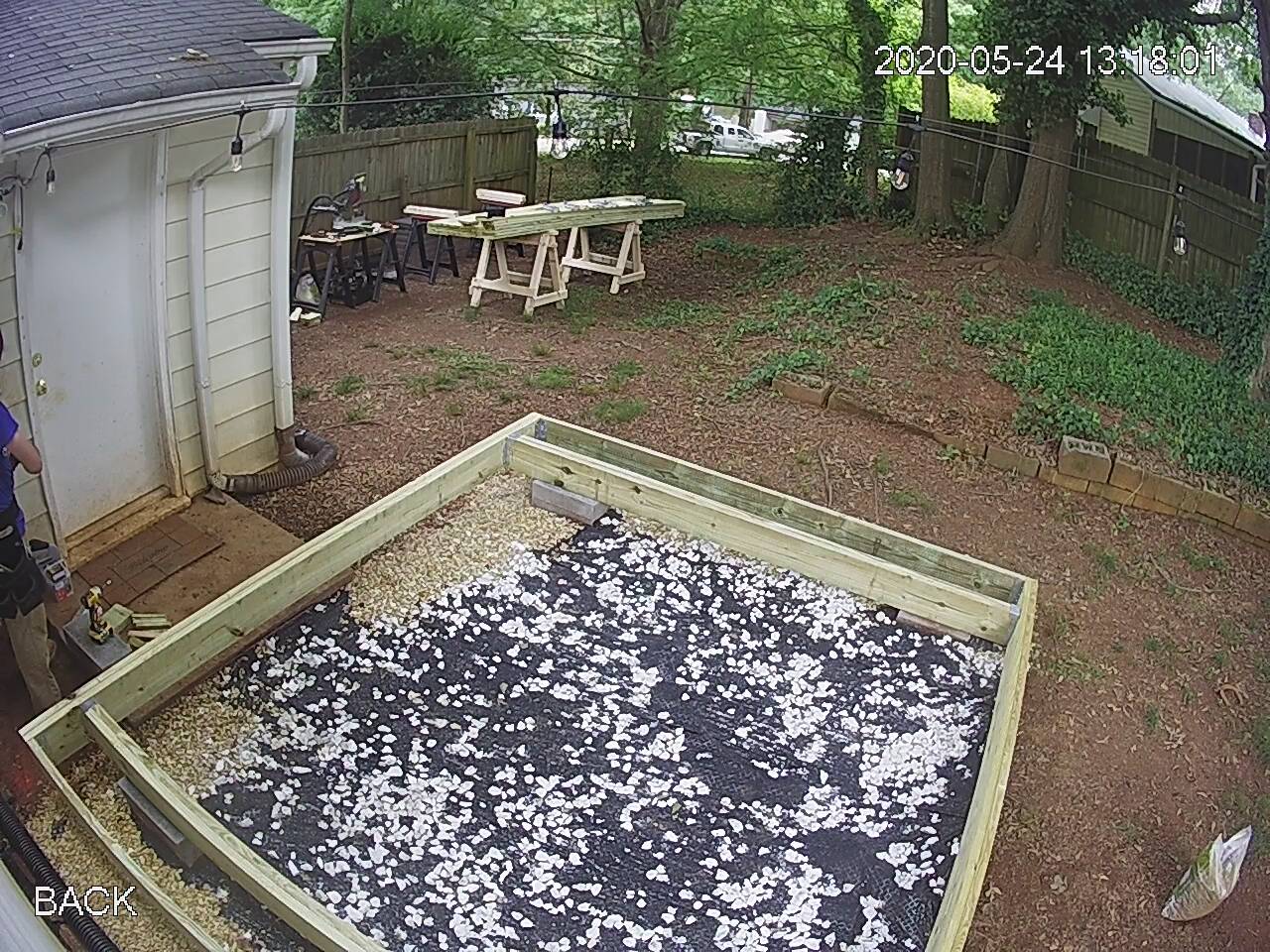 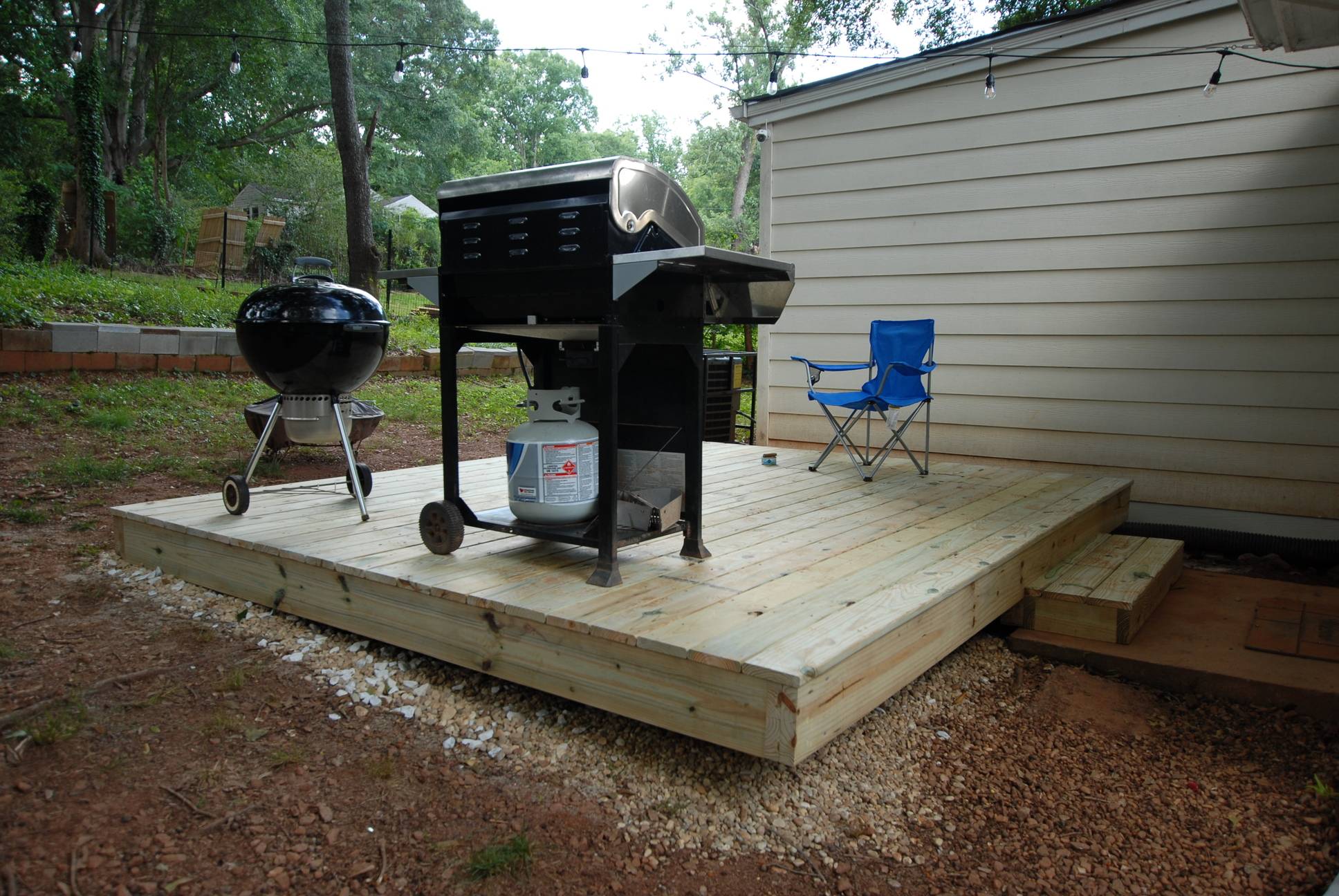 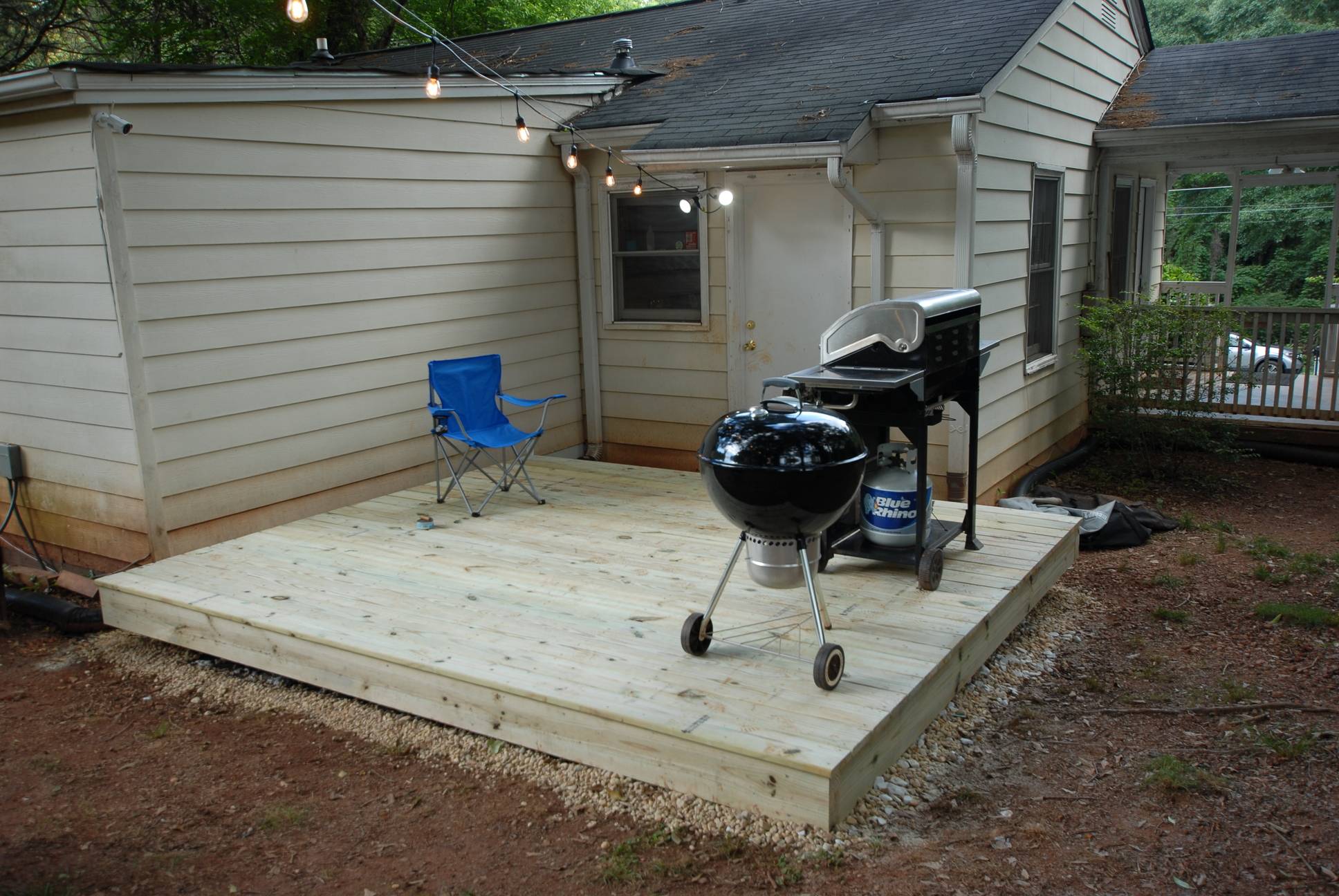 Beams (what you called headers) usually need to be doubled. For that size deck I'm confident that they'll carry without undue flex or risk of failure.

Now, about the overhang... double the beams, which rest on the piers, and double the rim joists, which act as flush beams. Like so:

Note: The double joist hangers for the beam to rim connection will be inverted. The rim is carried by the beam, opposite of how the rest of the joists are carried by the rim. Mount it upside-down.

This will carry well for cantilever up to about a foot. Code usually allows for cantilevers of 1.5x the joist height or something like that, but you'll be ok here.

With this layout there's no benefit to adding piers at the center of the doubled joists. If anything, you'd add a third doubled joist down the center, meaning you'd have six piers spread between three doubled joists. I'm not sure that's necessary, though, since you'll have a beam spread of just 8 feet. You could also make the flush beams 2x10 for extra capacity.

My thought would be to use concrete blocks under each joist a few inches back from the edge on the low side. From what you say it sounds like you might benefit from a step that would hide the blocks anyway.

1
How close to plumb to deck posts need to be?
3
Deck Footing capacity with BigFoot base
0
Extending an existing deck
1
Can I frame over an existing deck with a new deck to raise the level?
1
Replacing Rotted Deck Footings
0
Can I build deck on top of patio?
2
Can I use three 2x8 beams instead of two 2x10s for a deck?
1
Deck blocks below frost line