Deck Footing capacity with BigFoot base

I'm planning a new deck (completely replacing and enlarging an existing deck). The deck will be 25'x15' w/25 ft being attached to the house. I'm trying to determine what footings are required.

Local code requires going down 48" and the soil is rather sandy (I'm assuming 2000psf capacity). There will be a 1' cantilever on all sides. Height is low, between 20" and 32" depending on side. I'm planning on 2x8 framing with double 2x8 beams and notched 6x6 posts with joists running on top of the beams. Posts would be anchored on top of the footings, not embedded. Due to a potential snow load, I'm aiming for 80lb load.

Deck planning software tells me do two rows of 6 footings, one at 7 ft and another at 14 ft from the ledger. 6 footings would put them at 4'7" apart. I would like to use 10" sonotubes to reduce the amount of concrete,but using the calculator at http://www.ideasfordeckdesigns.com/calculators/deck-load-calculator.php with that setup gives me a minimum size of 13".

So this question is two parts.

2) How would using the BigFoot system impact the footing capacity? Since it's 25" wide at the base, does that significantly increase the capacity of the footing? I'm unsure of how it impacts the calculations, I assume it increases the amount of load the footing could take, but couldn't find a reference that said that in a language I understood... 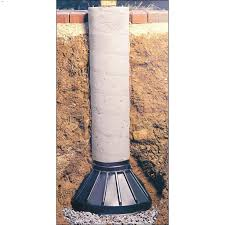 My suggestion would be to only have five footings in each row. They would be spaced 5'-9" apart. Not sure what kind of wood you are using, but your double 2x8's should be strong enough.

This is actually a fairly complicated problem, so consider having somebody review your final plan.

Not the answer you're looking for? Browse other questions tagged concrete code-compliance deck footings or ask your own question.

8
Can I use 4x4 posts as the primary support for a deck?
1
How wide does a 6x6 concrete post footing need to be using an elevated post base anchor?
1
Do deck footings need to be spaced evenly?
2
Drilling rebar hole in 12" concrete footing
1
How can I protect partially buried deck posts from decay?
1
Replacing Rotted Deck Footings
1
Deck blocks below frost line
8
Can I support 6x6" deck posts on 10" diameter poured concrete footings?
2
framing feedback for ground level deck 10'x22'
2
How much life left on 4x4 posts on my deck (in particular one that butts against the foundation)?