Mounting a pull-up bar on drywall and metal studs?

I live in a high-rise that utilizes metal studs. My roommate wants to hang this pull-up bar above a door frame. Is it possible, and via what options, to hang this without a high chance of ripping out drywall?

The door frame itself appears to be painted metal, guessing by the sound it makes when I hit it with my finger nails and looking inside the latch. I am not sure if there exists a wooden header on it, but my stud finder does not seem to indicate anything solid behind the top of the door, except a slugger in the middle. The door frame is flanked by two metal studs as expected.

Is this workable with some clever mounting technique, or are we SOL?

My in-laws bought my son a pull-up bar last year and I found that, despite, their insistence on the box that we needed 16" studs, the fully assembled bar had holes 17" apart. With there being a major math problem there, I took to solving it by adding a 2x4 behind the top and bottom. I attached the bar with a 4" lag bolt on the top of both sides (to limit roll) and added 3" screws on the side I couldn't put their large lags into. It holds me up just fine. If you want to go the 2x4 route, I think it could work.

The bar you linked, however, has 6 lags on a track for lags (which is smarter). With 3 anchor points available for top and bottom, you shouldn't need 2x4s, unless you're worried about the top rolling and want to better anchor the 2x4s themselves (which shouldn't be necessary)

Your Option #2 won't work at all, because if it falls, it will roll off the top (the force is cantilevered so the top will come forward first), not fall straight down.

Mounting a pull-up bar on drywall and metal studs? : No.

Both of your suggestions are the wrong kind of bar. Assuming the door has casing trim on it, you want one of these: 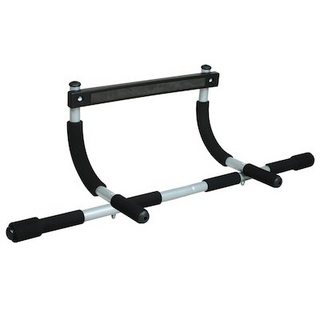 They're also like $30, instead of the unreasonable price of $150+ for a piece of pipe attached to two mounting brackets.

Not the answer you're looking for? Browse other questions tagged drywall mounting anchor or ask your own question.

17
If my wall has metal studs, is it better to anchor heavy objects through just drywall or also through the studs?

13
Can metal studs support a 64" plasma TV on a swiveling mount?
1
How to hang a TV on a drywall with no studs and no room for toggle bolts?
2
Articulated arm wall-mount (13lb. LCD monitor), 25 gauge metal stud, 3/4" drywall
2
How can I mount a TV with widely-spaced studs and weak wallboard?
1
Pull-up bar hanged from drywall door-frame
2
Installing a Heavy Sliding Barn Door into Metal Studs
2
Mounting pull up bar on cinder block wall