Can metal studs support a 64" plasma TV on a swiveling mount?

Alright, I need a sanity check here. I've been tasked with mounting a 64" plasma TV with an articulating mount onto a metal stud wall in the corporate boardroom. It's the quadruple-threat with no room for error.

The TV weighs 85lbs dead load. The mount, another 26lbs, allows it to be swiveled and repositioned up to about a foot from the wall. This allows it to be angled instead of hung like a picture frame.

I've done extensive research on TV mounting the last couple of days, and purchased some 3/4" plywood to anchor across 3 studs with 12 1/4" toggle bolts (4 per stud) and #14 screws to mount the TV bracket to the plywood. I've noticed a dearth of information on spec sheets when it comes to toggle bolt ratings on metal studs -- only drywall and masonry is provided. I don't know if this suggests that metal studs are a no-no or if they're some sort of in-between, though people seem to do it with success in mounting their big TVs.

The plywood backing I got is 38x24 centered on the middle stud.

My concern is that the cantilevering action will cause the stud wall to fail and I don't want to be responsible for a Career Limiting Move™. Are my concerns justified?

If my concerns are justified can you suggest an method to effectively hang this?

I do this for a (part of my) living. Steel studs will not provide the support you need with a cantilevered arm. If you want to surface-mount the TV then you can use toggle bolts through a steel stud, but a cantilevered arm WILL fail.

*Your mileage may vary. 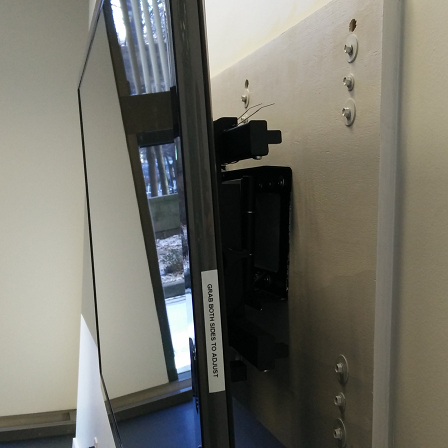 Using a 3/4" plywood backboard spanning 3 studs, I used 18 3" long 1/4" diameter self drilling screws (6 on each stud, 3 above and below the mount respectively) to mount it. 3" screws were used because of a double layering of 5/8" drywall behind the plywood. Large flat washers were used to bite the screws onto the backboard. The mount then went onto the backboard with its supplied hardware. I was doing pull ups off it before putting the TV on -- this thing ain't going anywhere. And it's been hanging for months with no problem. 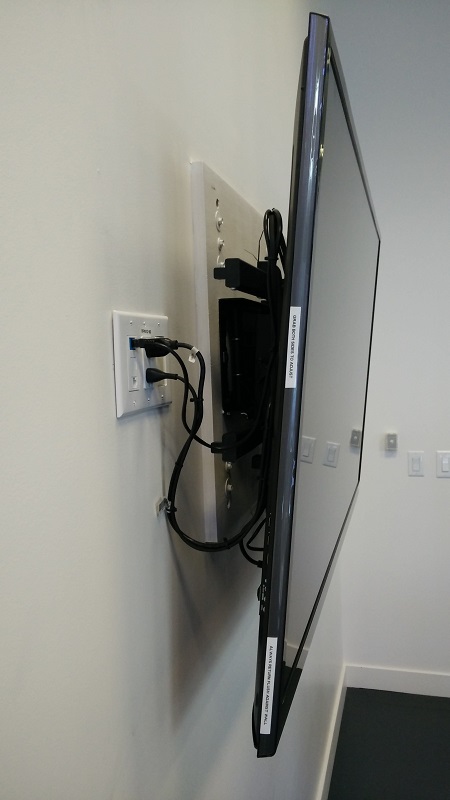 Note, toggle bolts will not work because the hole needed for a sufficient bolt will be 5/8", large enough to create problems centering all the bolts due to gravity - They will all want to slip down until they rest on the stud. You will also beat up the studs too much with a 5/8" hole.

The extraneous holes in the backboard are just predrills for toggles, they don't go anywhere. Great for future cable runs, though. :)

Something I just tried and is working great is the Toggler High-Performance Anchors. I got them at Lowes. They come 2 or I think 10 to a pack. the 2 pack was about 7 bucks. Says in Drywall alone it can hold 265 pounds. What we did was Drill a 1/2 hole into the Drywall and the metal Stud. Installed the 2 toggles and it is supporting my TV great. This system seams to work MUCH better than any other toggle based system out there.

The only reason I used this toggle system with my TV was because it was going into a metal stud. Looks much cleaner than using a sheet of plywood or Sheetrock.

I have metal studs on I think 21" centers. Some contractor was trying to be cheap. The dry wall seem to have metal in it. I used 4 - 50# plastic anchors into the dry wall with screws to match for the articulating mount for a 37" X 21" LED Vizio TV. I have moved the mounting all over the place holding on to the TV. I am sure that the TV is a lot lighter that 100#. I has been up for over 3 years, 1 medium earth quake and it is still solid.

Not the answer you're looking for? Browse other questions tagged mounting studs metal television or ask your own question.

3
Are snap toggles a good way to mount a TV to metal studs?
12
How safe is it to mount a TV tight to the wall with steel studs?
3
Mounting Full Motion Mount on a Single Stud
3
Drilling, hit metal running vertical floor to ceiling
0
TV wall mount ripped out, repair help please