So, I've read through a bunch of stuff online for mounting a pull up bar to a cinder block wall and before I go out and rent a hammer drill I want to see what would be the best anchor system for my specific scenario.

I plan to mount the bar in my garage. It is cinder blocks, but until I drill I'm not certain whether it is hollow or if the blocks are filled. In either case, it is a load bearing wall as on top is a cement slab, over top some sort of metal sheeting. I do have access to the other side of the cinder blocks both from the outside and the inside of the house, but would prefer not having something sticking out the other side if possible.

I'm not sure if I can just use 3/8 in. sleeve anchors, or if it would be better to mount some 2x8's vertically with cement screws and then bolt into those, or drill all the way through the wall and then bolt it through that way. I just want to make sure it is safe and secure for years to come.

I'm reasonably handy, but I've never really drilled and mounted into concrete and I know this is a somewhat special case due to the inconsistant force being applied. 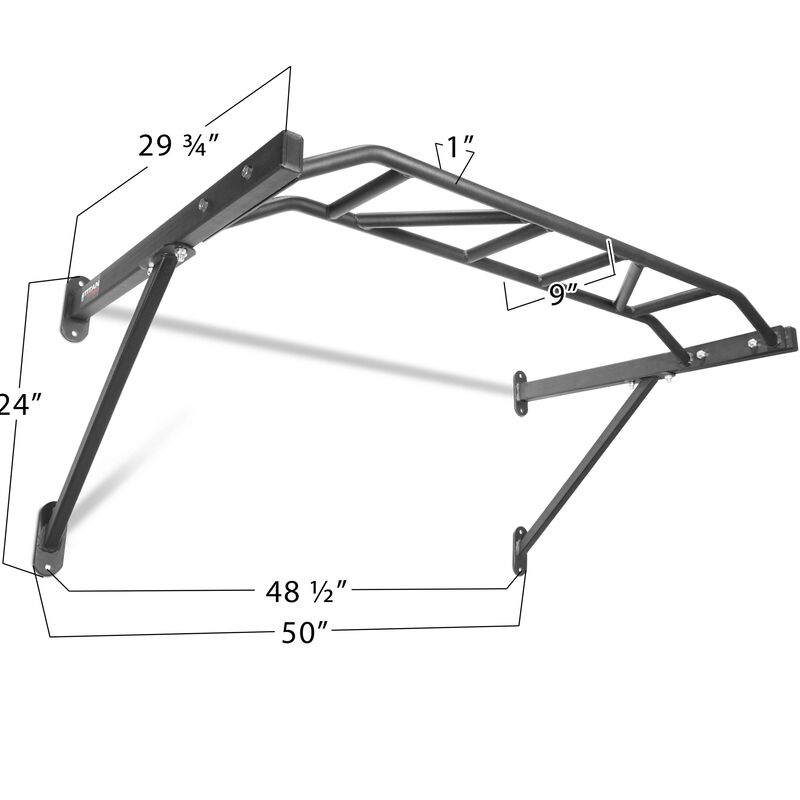 I installed a similar attachment to this in my closet on an exterior block wall. I used 3/8" toggles with 3/8" threaded rod , washers and nuts. I did not use the 8 holes but only the top hole on each support. I was lucky and got the hollow portion of the block. It hadn't budged in 35 years.

The problem can be divided into 3 parts:

A) Determine the static pull-out force.

B) Determine the dynamic to static force ratio. My gut feel is 2X to 3X, but I have nothing to back it up.

This is only an answer to part A.

The problem is much easier to solve if a few simplifications are made. I have re-positioned the diagonal, this is OK because we don't care about the compression force in the diagonal member. Each member can now be considered to be a strut of a simple truss (tension or compression only, no torque).

The geometry determines the forces. The static pull-out force at the top is the weight of the person multiplied by the ratio of the dimensions (projection/vertical). 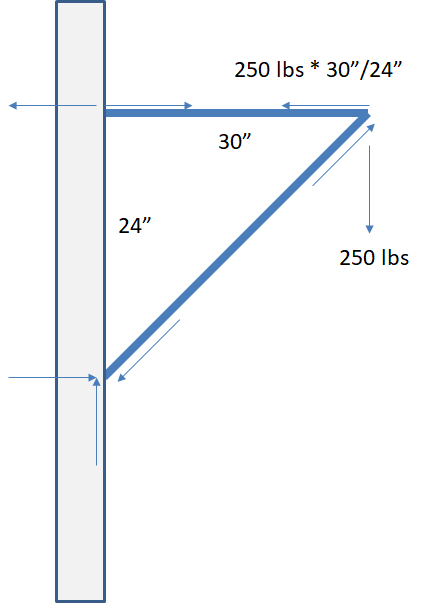 I would use 3/8 toggle bolts. At 50 inches, you should be able to hit the hollow part of the blocks. If they aren't hollow, then great, go with sleeve anchors, which should be fine according to the calculations above. I used to see old tube type TV mounted in classrooms to blocks all the time.

I think you're over thinking this. You have 4 mounting holes across the top, which is going to want to pull away from the wall when you hang from the bar. I'm not concerned about the shear (straight down) force as you have 4 more bolts along the bottom to help with that force.

Not sure how much you weigh, but let's say you're a big guy, 250 lbs. That's 62.5 lbs per fastener along the top. According to the Concrete Fasteners website, a 1/4" sleeve anchor embedded 1" has a pull out strength of 682 lbs. See table below.

With 4 of them the pull out force would be greater than 2700 lbs.

Mount the bar directly to the wall. Why bother with an intermediate support like the 2x8's you were talking about?

Updated my back-of-the-envelope estimate for the pullout force on the upper connectors. Here's the analysis- 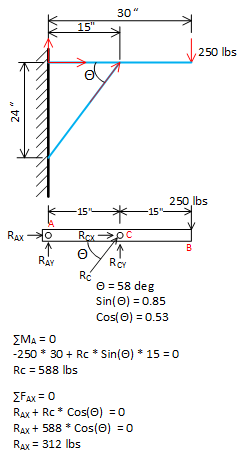 Second diagram depicts the upper, horizontal bar and the brace. The arrows indicate the various forces acting on the pinned joints A & C.

Method used was to sum the moments about A that, because it is pinned, have to equal zero, and solve that for the reactive force on the brace, Rc in the diagram.

Once I have Rc, I can solve two more equations to get the reactive forces on A. Rx has to equal, in magnitude, the pullout force on the top of the bar. Rx works out to be 312 lbs, just like Mattman showed in his analysis.

Honestly, I was surprised our answers were identical, given that Mattman had made some simplifying assumptions.

Anyway, we're now at 312 lbs total pull out force on the top of the bar, or 78 lbs per fastener, or about 20% higher that my original estimate. Even with a 2X or 3X margin needed for shock, I don't think that's too much for a wedge anchor in a hollow block. But I don't have anything solid (no pun intended) to base that on.

Not the answer you're looking for? Browse other questions tagged mounting anchor cement cinderblock or ask your own question.

3
open cinder block wall in basement
3
Should you solid fill a low cinder block wall?
1
How to tile over cinder block holes?
2
What anchor type should I use for mounting a pull-up bar installation into concrete?
0
Any idea what I'm drilling into?
1
Hanging large TV and media cabinet on cement block covered with drywall
1
What is my 3/8" concrete drill bit hitting in the basement wall and not penetrating when I try to mount a TV?
1
Mounting a pull-up bar on drywall and metal studs?
0
How can I drill into cinder blocks and attack brackets?
1
Mounting Shelving on Basement Wall with Plastic Moisture Barrier Sheeting