I'm trying to replace a mechanical double pole thermostat with a programmable electronic one.

Existing setup:
The old thermostat model is 859M and it's wiring is pictured below. There's 2 pairs of cables coming out of the wall, two of them with 3 wires each (red, black, white) and another pair with 2 wires each (black and white). All white wires are screwed together, two black wires pictured at the top are hot (I'm assuming these come from the breaker panel). Thermostat has a true Off setting. When it is On (on the lowest temp) there's power on one of the black wires coming out of it, which seems to supply power to a fan in the room (since there's also power on the fan at that point). When thermostat is dialed further above room temperature there's also power on the other black wire coming out of it, and at that point pump is working in the basement supplying hot water to the tubes going through the fan in the room.

New thermostat:
The new one is Aube TH115 and is pictured further below. Wiring manual suggests using 4 separate wires to connect it, however one of the connecting options I tried failed to turn the heater and fan on, even though the thermostat was powered. I wonder what is the correct wiring in my case and specifically whether L1 and L2 wires need to be connected to the same incoming hot wire. 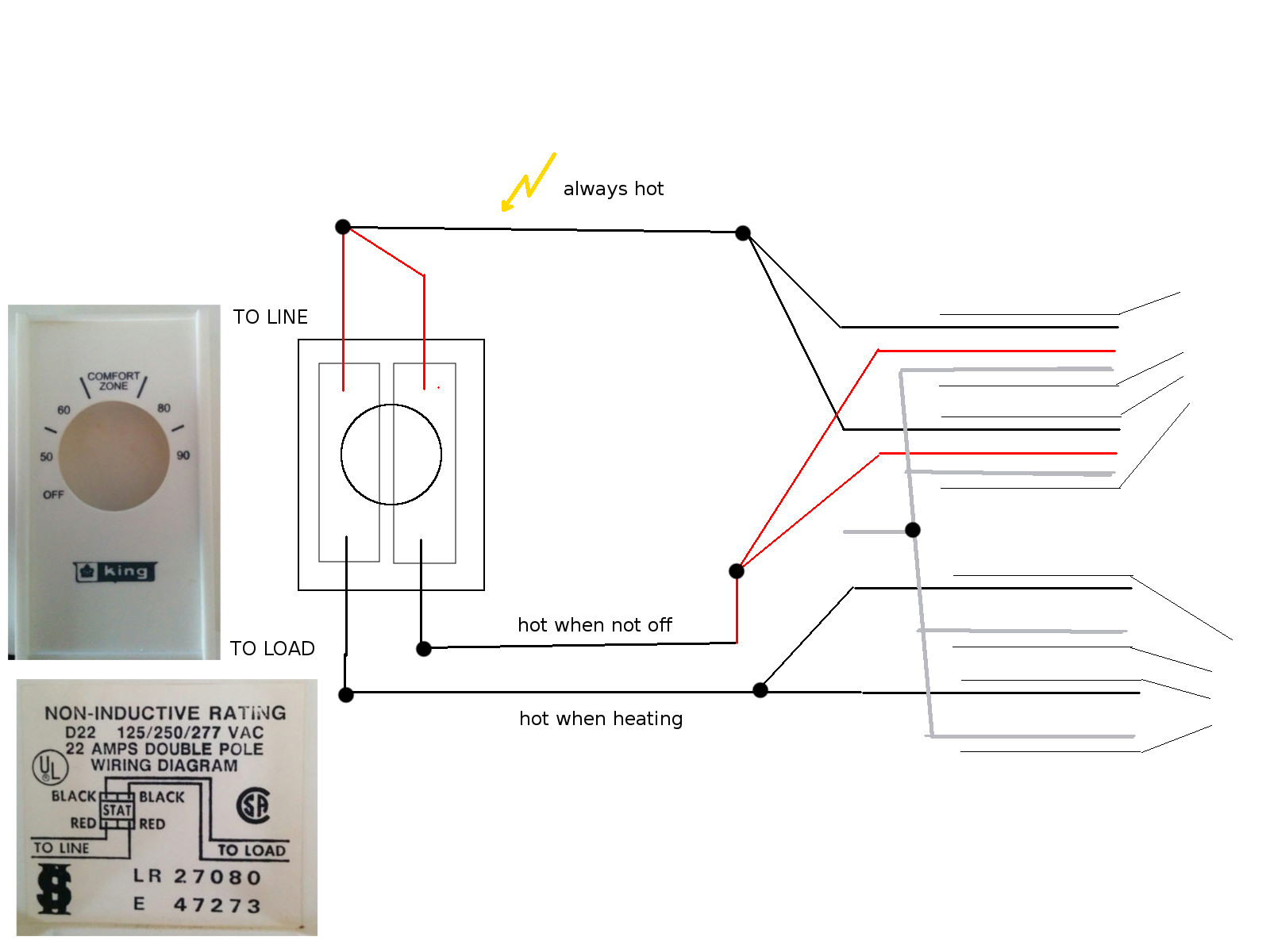 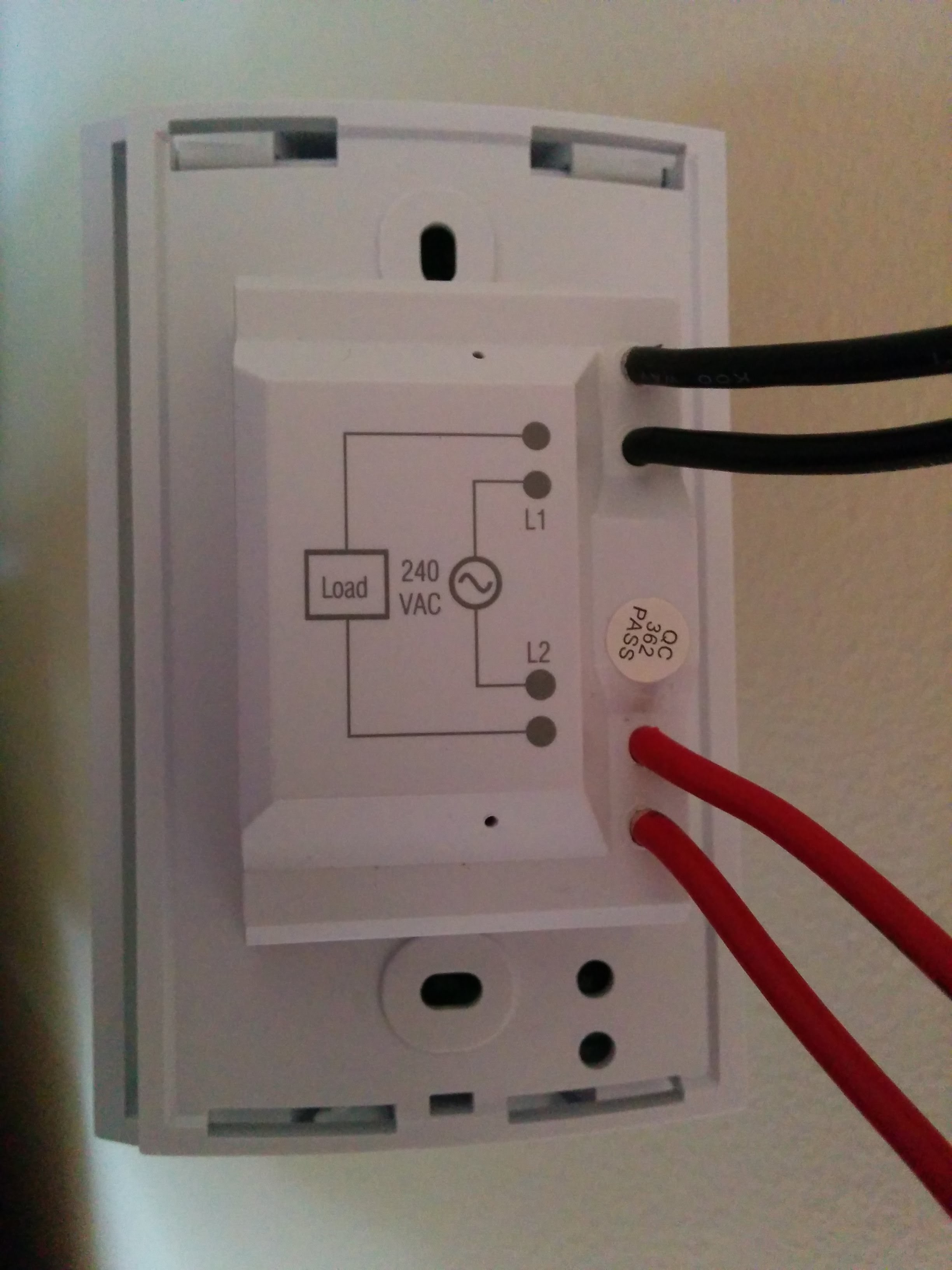 Take your thermostat back and get a refund

Your existing setup relied on the way double pole 240V thermostats work -- one leg is an ON/OFF (disconnect) function, while the other leg is thermostatically controlled. This is fine for running electric resistance heaters, and also in the case of a mechanical thermostat abusable for what the original installer did to control the fans ON/OFF and pump thermostatically.

However, an electronic thermostat like yours needs power for its own functions. While I'm not clear on how you wired it to get it to turn on at all, it certainly won't work correctly with both of its incoming hots on the same leg, in any case.

How to do things the right way

To actually control your system with a programmable thermostat, you'll need four things (and possibly a fifth if the installer was a cheapskate):

Installation is as follows:

This isn't going to work

The old thermostat you have is a 240V thermostat made to directly switch true electric resistance heaters such as Cadet types. Those types use 240V only and do not use a neutral. The fact that neutral is heavily used here is a warning sign.

They are supposed to be 2-pole thermostats, meaning they switch both hot legs of the 240V. In actuality, the cheaper ones take a shortcut: only one hot leg is switched thermostatically based on temperature, and the other is switched off only when the knob is set to OFF.

You have two choices:

You have 0.00% chance of successfully using that 240V smart stat. This is actually good news, since you will probably end up in the much more robust world of the 24V smart stats like the Nest, which are better featured, have better competition and a wider variety of choices.

Not the answer you're looking for? Browse other questions tagged wiring thermostat or ask your own question.