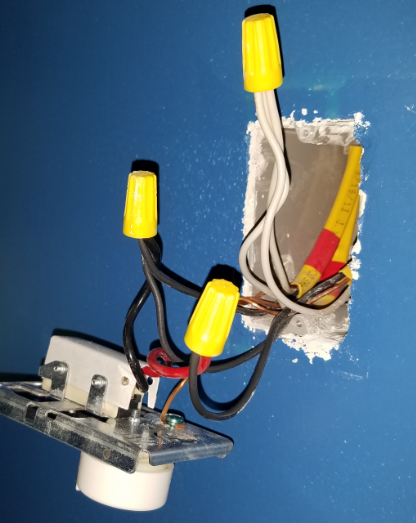 Just bought my first home and this is my first time posting, so please forgive me if my terminology is incorrect.

I currently have bedrooms upstairs each with 1 baseboard heater and thermostat for each. The circuit breaker is off and I've undone most of the wiring to it.

The thermostat is an analog, single pole line voltage.

I'd like to upgrade to a digital double pole.

Do I simply need to connect 2 hots and 2 neutrals to the thermostat and I am set?

For a thermostat, one pole is sufficient to turn the heaters on and off. For the other pole, you'd simply bind the wires together - and I think that's what's been done with the white wires.

Follow the one wire and it goes to the Romex on the right. That Romex goes to the power source, clearly, and its wires should be considered "LINE" (always-on). Which means the white wire in that bundle is the other pole.

The other Romex cables go to the heaters, and they are "LOAD" (switched).

This wire is /2 Romex since there's no red wire. (ground is not counted, so /2 means black and white). The yellow sheath suggests 12/ since some manufacturers recently adopted that as a color code. The markings on the sheath say for sure.

Are the white wires hot (240V) or neutral (120V)? We can't tell. It would be wired the same either way. 240V heaters don't need neutral, so they use 12/2 or 10/2 wire, and re-designate and supposedly, re-mark the white as another "hot". Somebody went to a lot of trouble to put red tape on the Romex cables... shrug. In the old days, marking wasn't required if the use was obvious.

So we must go down to the breaker panel. Looking at the layout, it should be obvious that there's a unit of "space". If the breaker takes 2 spaces, it is a 240V circuit. There won't be many of those.

Simply, turn off one at a time and see what it knocks out. Generally there is one thing on each 240V circuit (well, oven and stove may share a circuit). This is a good time to mark those breakers once you figure what they control. Not least it helps you eliminate; heaters are very annoying to test because they take a long time to make noticeable heat.

Although the smart thermostat may not care if it's 120V or 240V. It needs to power itself, but it may be inherently multi-voltage. Many things are nowadays.

It goes without saying that you have to find the breaker in order to change the thermostat. If you don't realize that, you should not be doing electrical work.

If I am reading this question correctly, there is just one heater per thermostat.

There are three cables in the box, the yellow jacket tells me 99% certain they are 12/2.

I think it's most likely that one cable is the feed / source, one is the heater, and one continues to other outlets - lights or receptacles.

This is easy enough to confirm, if the breaker for the circuit supplying the heaters is a single pole breaker, it's a 120V circuit. If not, stop now, disregard the rest of this answer.

OP bought the wrong thermostat. You cannot substitute a double pole thermostat for an original single pole thermostat.The number of "poles" on the thermostat must match those of the breaker. One pole or space it takes up in the breaker panel is 120 volt, 2 poles is either 208 or 240 volt in the context of a wall heater. (There are, as an aside 30, 40 50 plus double pole breakers for other uses). So tell us how many poles and the amp rating of the heater breaker and go but the appropriate thermostat. From there we can help you with the wiring.

The wiring in the picture does not look like a pro did it. 1. Not enough twists in the wire. 2. Very long Romex sheathing extending into the box, which is a no-no. Both are potential fire hazards and need to be addressed, IMHO.

Not the answer you're looking for? Browse other questions tagged electrical wiring thermostat baseboard or ask your own question.