Cannot adjust dropbolt on bifold doors which is catching 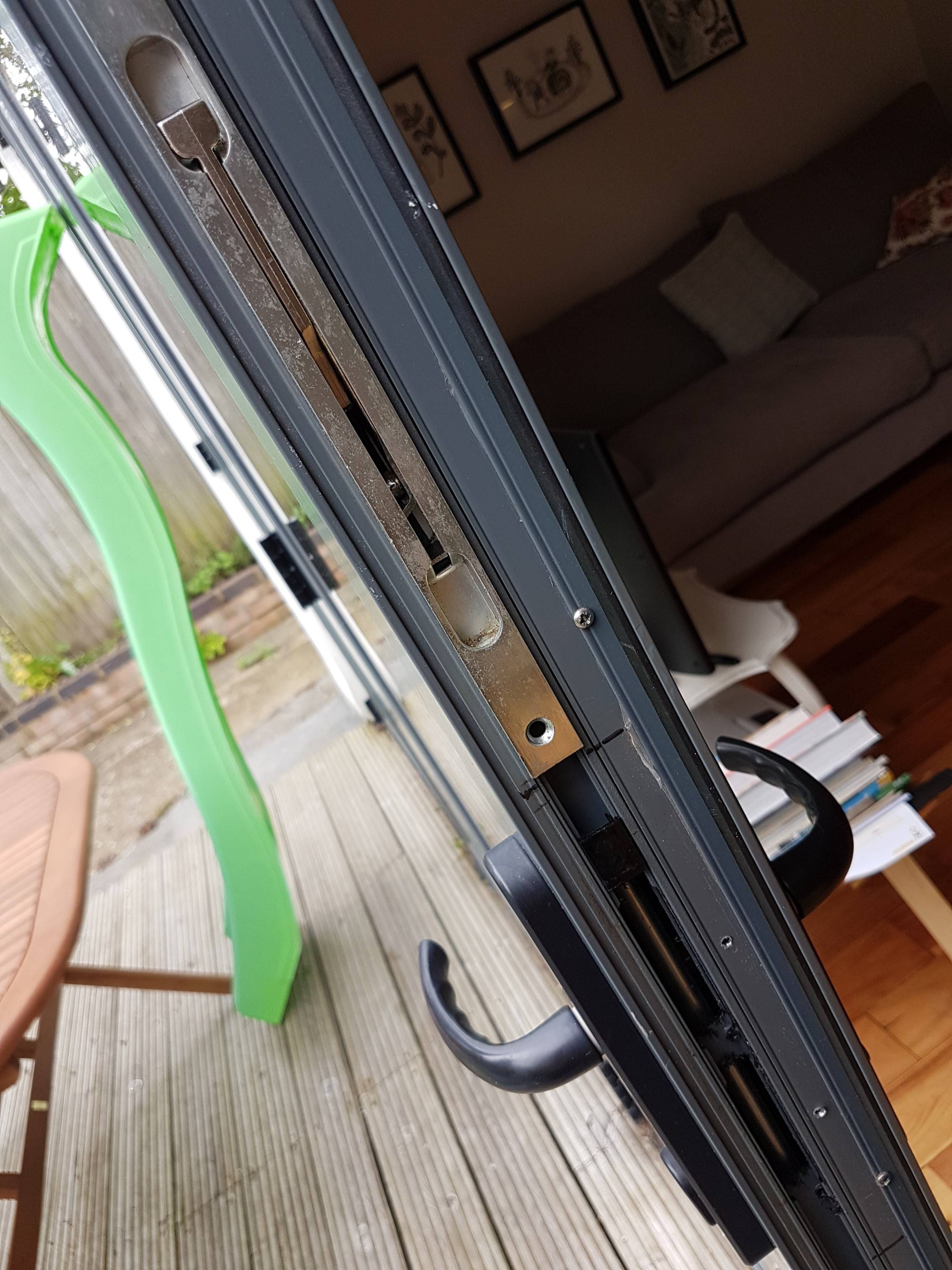 I have a patio door made of up two aluminium tri-folding doors which meet in the middle. One side has a normal 5 point locking system operated by a normal door handle and key. The other side has a hidden lever (only accessible when the main door is unlocked and set ajar.

The hidden lever (as seen in photo, as silver coloured) operates two bolts, one up and one down, to lock it in position.

The problem is when I operate this lever, it moves fine and the top bolt moves down sufficiently to release door at top. But at the bottom, the bolt does not move up enough to clear the metal lip on the ground.

So, I need to adjust this bolt to move it up. I keep saying bolt, but its more like a 80cm steel rod which goes from the hidden level down to the ground.

Basically, I can't access this bolt. Its hidden inside. I've taken off the lock faceplates and even attempted to remove the glass, so get access to the steel rod/bolt, but I can't access it.

The patio doors are 5 years old, so quite modern.

Maybe another way to ask is, how would someone actually fit the rod/bolt in the first place and perform adjustments?

That is called a manual flush bolt. The piece that protrudes through the top and bottom of the door is called the bolt head.

Both the bolt head (which is threaded to an actuating rod), and the actuating rod (which is threaded to the lever actuator) are designed to be adjusted by threading them in or out. The bolt head is commonly keyed, i.e. it is not round but designed with a flat spot (like a "D" shape) and protrudes through a guide plate (attached to the top and bottom of the door) which is also keyed, to prevent the bolt head from turning, which would change the length/adjustment.

You need to thread the bolt head and/or rod in to shorten the flush bolt throw length. The proper way would be to remove the door and lay it flat, then remove the guide. You could try turning it while the door is still hung, using long nose pliers or similar tool; but if the bolt head is keyed and a guide is installed it wont turn, by design. 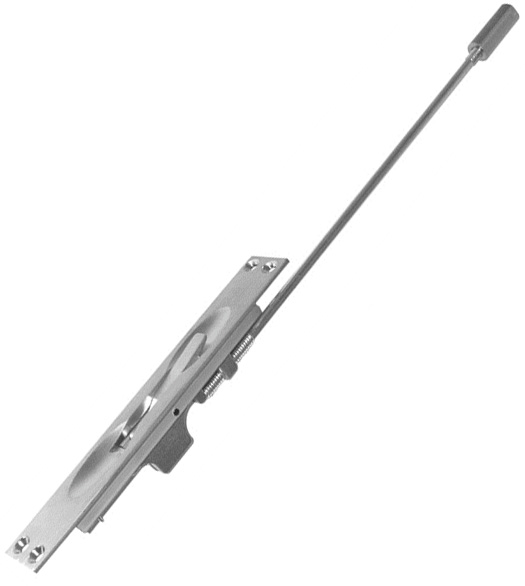 So I eventually figured it out, after some trial and error.

Many thanks to Jimmy Fix-It, for giving me the correct term of flush-bolt :)

I realised that the door itself had become slightly out of align, probably because people kept pushing the door and so after a while the top edge of the door, didn't line up with the flushing on the ceiling.

Therefore, when I tried to operate the flush-bolt, instead of the bolt appearing from the top of the door and into the cavity in the ceiling, it hit the metal door frame.

The user would then push the flush-bolt lever harder, thinking it was just stiff. But in turn, this actually pushed the flush-bolt mechanism down further (a bit like a rower, rowing into a brick wall).

All sorted and all I needed was a cross-head screw driver.

Not the answer you're looking for? Browse other questions tagged windows lock deadbolt or ask your own question.

2
Which windows work with which automated window openers?
7
Why is a steel security door safe if they can break the glass, slide their hand in, and unlock the door?
3
Ways to mitigate safety risks with double cylinder deadbolts on enterance/exit doors?
1
Which kind of locks should be installed on external wooden glass panel doors?
1
My door was locked but the handle came off, uses non-traditional unlock
0
Cannot remove the Kwikset deadbolt
0
How to fix deadbolt lever that doesn't lock or unlock the deadbolt
0
Cannot open uPVC Window