Which kind of locks should be installed on external wooden glass panel doors?

When you have an external glass panel door it may be simple for a criminal to break a pane of glass to access the handle and lock inside.

What types of locks are appropriate to install on a door of this type? I think a deadbolt of some type should always be installed, but I've seen what I think are "rim locks" installed some places which I don't think are secure.

An ordinary door lock. Double cylinder deadbolts, which require a key from either side, are in violation of the fire code many places. It isn't a good risk trade off even if they are legal, especially considering you could change to a solid door in areas at a higher risk for crime.

Apparently, they do make key capture deadbolts which prevent removing the from the inside of a locked door. When you're away from home it will prevent burglars which are too stupid or lazy to smash a window instead.

Install a double-keyed deadbolt if you're worried about someone breaking the glass and reaching in to unlock the door from the inside. Double-keyed means that you have a lock cylinder on both sides of the door.

The downside is that if the deadbolt is locked, you still need to have a key to egress in case of emergency. If you leave a spare key in the lock it defeats the purpose, so I've seen people attach a spare key to the door hanging from a piece of string long enough to operate the deadbolt. An intruder wouldn't know to look for a key on the string as long as they didn't have past knowledge of your setup, but you can keep it on a table out of reach too.

The best solution is to have a double-keyed electronic deadbolt, so if you need to exit you can punch a 4 digit code into a digital keypad. Worst case you could just jump out a window if the lock fails.

Another solution is to install security film to the glass, which also gets glued to the wood frame surrounding the glass. This clear film is difficult to cut through, so even though the glass would break it would hold the glass together similar to how security glass with wire in it works. 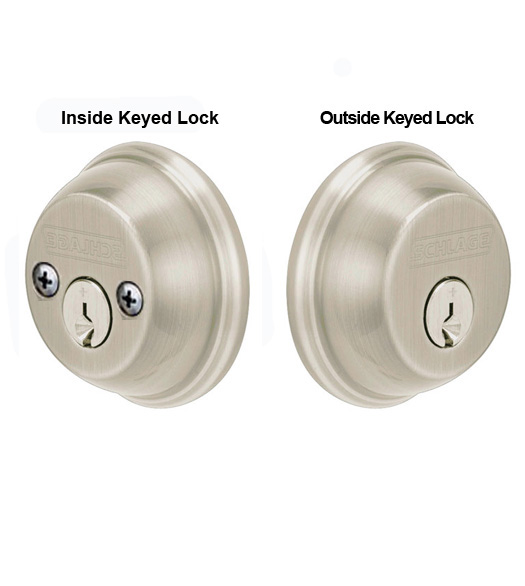 I installed a Double Cylinder Deadbolt last week on door just like the one you reference that was keyed on both sides. Instead of a manual throw knob it requires a key to actuate the dead bolt from either side so it can not be opened from the inside without a key.

i can not speak to its legality or code compliance.

You should check with your municipality for code and laws.

Not the answer you're looking for? Browse other questions tagged lock deadbolt or ask your own question.

2
what parameters should I look for when choosing an electric deadbolt?
1
Cannot adjust dropbolt on bifold doors which is catching
0
Repair or installation of a mortise lock with deadbolt in an exterior door
1
How to repair a lose door handle?
5
Security door with lock guard
0
Battle of the British Standard BS3621
0
Ensure that a closed door is a completely locked door?