How should I rewire this situation?

In my dinning room, I have this: 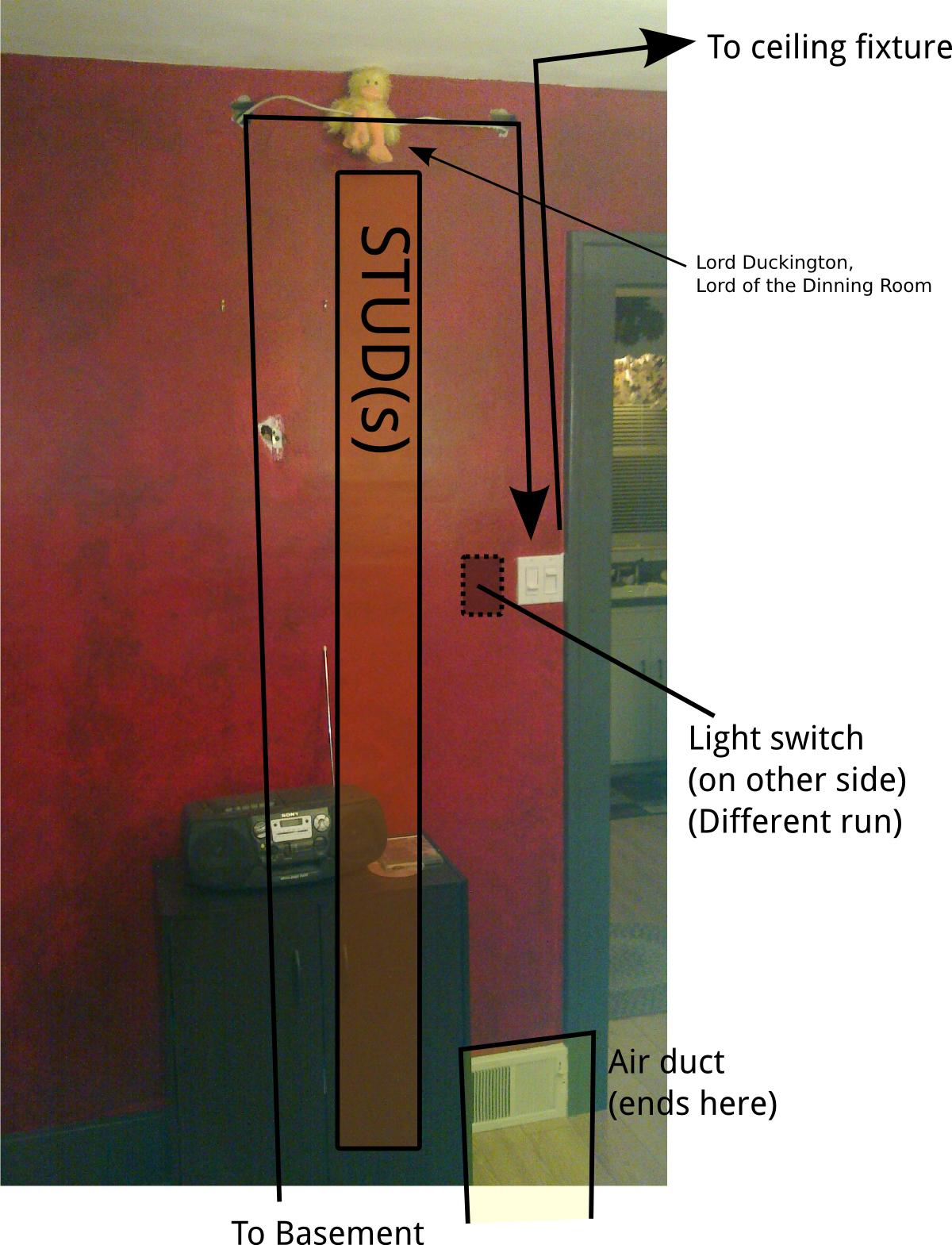 There is a wire run going up through the floor from the basement. It then goes outside the wall, around a stud (or studs, I'm can't tell there is more than one), back into the wall, and down to the switch. It then runs up to a ceiling fixture, and then up to the 2nd floor where it powers one light fixture and one outlet.

It looks like the previous owner did this because there is an air duct directly below the switch and they wanted to avoid it. There was a drop ceiling in this room, so that wire was hidden above the ceiling.

Directly on the other side of this wall, very close to that switch is a switch on another circuit. That circuit powers the kitchen light (a small, 2 bulb affair), a gas stove, and one outlet near the counter.

Not evident in this picture is the fact that my baseboards are a good 6" wide. Also, the walls are plaster. Obviously I have a few holes to patch no matter what, but I want to be absolutely sure of my plan before any other holes are made.

To me, it looks like there are a few options, and I'm not sure what is the best one:

As a novice to electrical work, how should I approach this problem?

EDIT: I have completed this project. I ended up pulling off the baseboard and drilling a hole through the floor, then patching those holes. This was surprisingly less difficult than I thought it would be. The responses were a big help, both in information and getting the confidence to actually complete it!

Move the run over a few feet, which would it stick it beside the air duct (I think there's about 1/2" between the duct and the adjacent stud. Is it safe for them to be so close?)

There is nothing I see in the NEC that puts restrictions on running electrical line near HVAC as long as it meets other code requirements. It must be properly anchored to the structure, meaning that when it is run it should be anchored or stapled to the wall studs. HVAC does not count. In absolutely NO circumstances should you ever run electric line INSIDE of HVAC!

Leave the run as is, move Lord Duckington from his throne, cut away the plaster between the two hole, drill holes in the studs and feed said wire through it, fix mess (I think this wall is load bearing, so this might be a bad idea).

A small hole for electrical line in the middle of the stud will not affect the load bearing capacity of the wall by any meaningful amount. This is safe and probably the best option.

Re-wire so that this run is getting its power from the circuit on the wall behind it. They don't have much on them, so I think combining them is probably safe. In this case, would it be safe to have a few inches of romex going from one box to the next and just connect everything with wire nuts?

This is another option and would probably involve less plaster patching when you are done. The only thing you should make sure of is if the lead line is coming to the switch box. If the power is coming to the receptacle or luminaire rather than the switch then this will not work. Make sure to wire everything properly in parallel if you do this.

Pull off the baseboards, drill a new hole in the floor, and move the box a 6 inches to the left (not sure if the lath is behind the baseboards or not).

If you feel that there is enough room there not taken up by the HVAC system then sure, you could rerun it this way from the basement. In fact, with your tall baseboard you can hide the plaster damage and fishtape it up to the new outlet location. Again, please make sure that there isn't a vent running up that wall stud going to upstairs, which seems likely from your photo.

Lord Duckington I am sure doesn't approve.

As it is, it's proper, if perhaps a bit circuitous--aside from the wire coming out of the wall. So I'd say that's all you need to fix. You'll likely need to enlarge the current holes a bit so you get get a long drill bit in there to drill a hole in the stud and then be able to fish it through. A hole in the center of the stud big enough for the wiring will not compromise the strength of the wall in any meaningful way, so don't worry about that.

To move the wires you're going to have to take the existing electrical box out of the wall anyway, so I would just drill a hole up through the bottom plate of your wall from the basement and fish the wire up to the hole you make when you remove that two gang box. You may have to temporarily take apart the furnace duct to reach the right spot, but that's much easier, less time-consuming, and less messy than re-doing all that drywall to run wire through the studs. Putting some spackle on the two existing holes is much less of a project than fixing all the holes you'll have to make to drill through those studs and run the wire. If you can cut off the existing wire where it is exposed and then pull it back into the basement, you can then fish it back up to where the switchbox goes, and you won't even have to buy any new wire.

Not the answer you're looking for? Browse other questions tagged electrical wiring switch junction-box or ask your own question.

19
How can I get a wire that is outside a wall to be inside a wall
5
Does the NEC allow electrical wiring to run next to a ventilation duct?

7
How much drywall should I cut to re-route some wires?
2
Why might there be concrete inside my wall?
1
How can I rewire this light switch?
1
What is this single pole switch to empty ceiling box blows breaker when switched on
2
How do I rewire this box?
3
How can I disable a wall switch and leave the circuit always on?
0
How do I fix this crossed wiring situation?
1
Rewire switch controlled outlet to ceiling light