I was attempting to run speaker wire to the opposite side of my office via the basement. I was hoping to accomplish this by feeding wires into a wall plate near the floor, down the interior of the wall, through the flooring, then across the basement and back up in reverse. I identified the edge of the floor by drilling a small hole under the moulding and poking a wire through. Found this wire in the crawlspace, proceeded about 2" over in the direction of the wall to get to the wall interior, and drilled up using a spade bit. I was surprised, after a bit of wood, to run into concrete of some kind. I didn't run into any while drilling that "pilot" hole for the wire. I stopped, not sure what to do.

Any idea why I might have concrete or cinderblock on the bottom of my wall interior? The house was built originally in 1912. The wall interior is fairly thin, around 4". I'm not sure the thickness of this concrete as I'm hesitating to drill all the way through it.

Do you think it's safe to drill up through this concrete (a hole of 1/2" diameter will suffice) and run the wires through there? Do I risk weakening the structure in any way? Should I try another spot in the floor, if you think it might not run the length of the wall?

Update 1. Tried scraping it a bit more from underneath in the crawlspace to see if it was just caked up plaster. Gray dust comes off but it's far deeper. I'm pretty sure it's concrete.

Update 2. The concrete seems to extend up the wall interior at least 8" above the floorboards up to where I planned on affixing a wall plate. Any idea what I'm looking at? Hint: the house does have a chimney that has been walled over and used to exhaust the furnace/water heater, but this is not where that chimney is. There's nothing below this wall in the crawlspace to give me any hints. 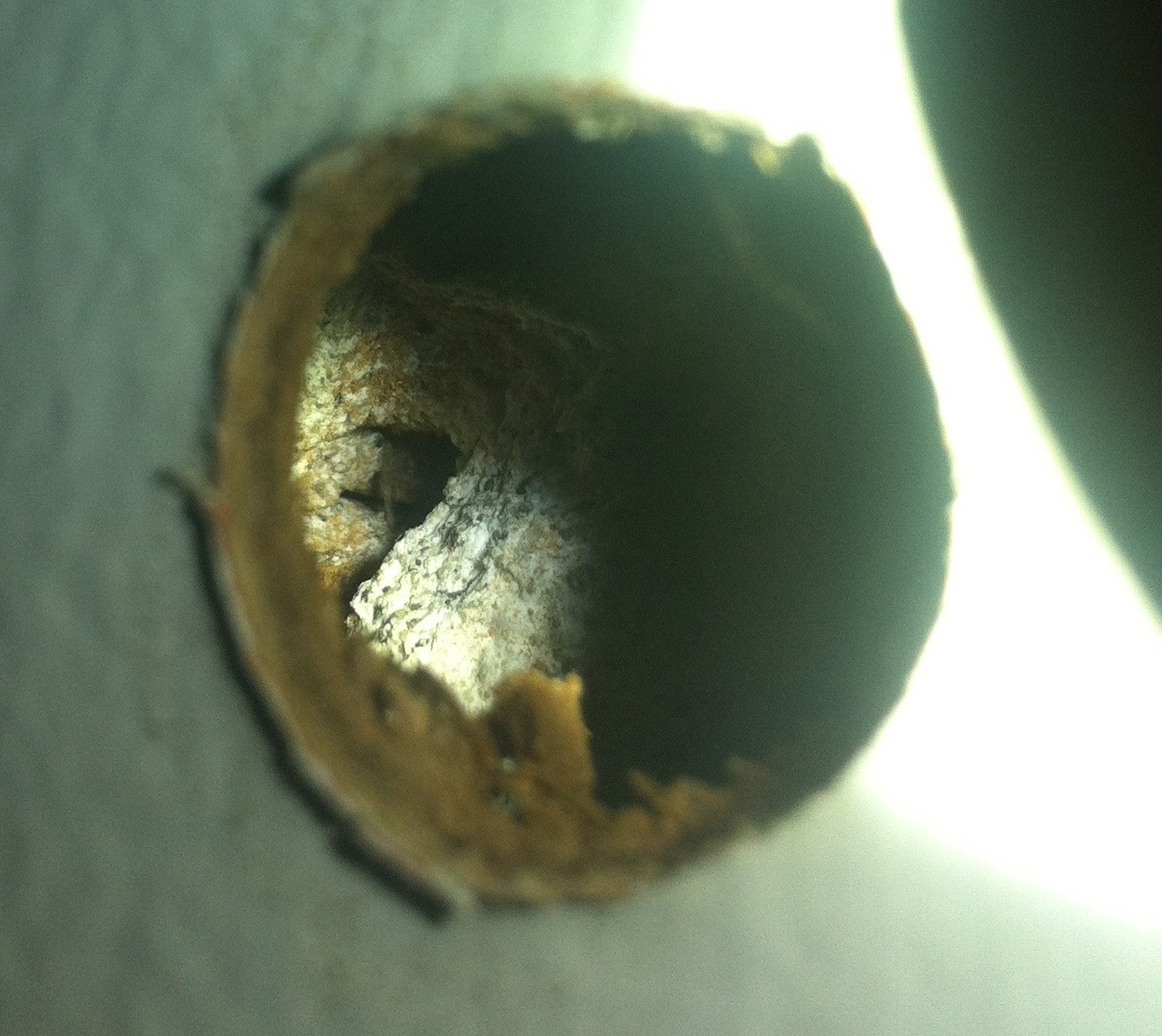 Update 3. I think what I'm dealing with here is rock lath. The plaster appears to extend horizontally to the stud (if not an actual structural stud then some sort of vertical wood beam) and then forms a neat edge against it. I've poked around a bit more with a small inspection mirror and I believe the bead board wall is covering this wall constructed of rock lath boards coated in plaster. The bead board hovers about 1/2" in front of the plaster and indeed in front of the wood beam- in other words, it's not in direct contact.

The early 1900's was the age of horsehair plaster. The plaster was installed in several coats over wooden laths. What you might be hitting is the plaster that as squeezed between the lath and landed on the soleplate. You should be able to tell if it is plaster by its' somewhat crumbly texture. Insert a long screwdriver in the hole and tap it with a hammer. If it is plaster it should easily break-up and leave you with clean hole.

16
How do I run ethernet, speaker wire, and coax through a wall into a crawlspace?
1
Difficulty attaching 2x4s to poured concrete wall
0
Reinforced concrete drilling: wall plug won't fit
2
Passing wire down through Exterior Wall
1
Mounting wifi access point to lath and plaster ceiling
0
Why is there insulation in the common wall between housing units?
15
How to drill through wall without hitting boiler on the other side
0
How would I smooth out an interior concrete beam?