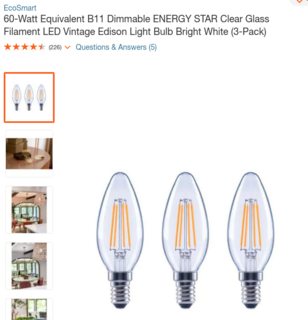 everything works exactly as expected - the dimmer works, and when I press "lights off" on the fan remote, the lights turn all the way off.

However, if I install 3 of these (60-Watt Equivalent B11 Dimmable LED Light Bulb Daylight): 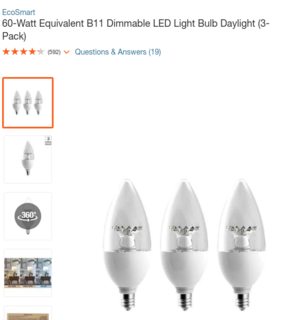 they dim sensibly, but when I press "lights off" they become quite dime but are still on enough as to be too bright to sleep with.

What's the difference between these two? I was under the impression that as long as LED bulbs were "dimmable" they would behave appropriately - what else do I need to look for?

It's because the dimmer is a throwback to the 1960s.

A lot of switch wiring is installed as switch loops - only 2 wires come down from lamp to switch. The intention is that a plain switch will either connect (short) those, or not connect them. The two wires are always-hot, and switched-hot (i.e. hot when you want the lamp to be on).

Then they figured out how to use silicon triacs to dim incandescent bulbs cheaply and without making a lot of heat at at the switch.

Early dimmers had a problem. The dimmer's onboard electronics needed power - easy enough; grab always-hot and neutral from the box. But neutral wasn't available in switch loops. So the dominant dimmer design leaks power through the incandescent bulb in order to power the dimmer's electronics. Even in the nominal "off" position, this leakage still occurs.

On incandescents, this was not enough power to make the filaments glow cherry red even. So it was unseen.

With LEDs, we should have done a blank-sheet design where LED dimmers send full power, but also digital pulses telling each LED how dim to be, and the LED would decode that and set brightness to match. Sadly, they stayed with triac dimming, aiming to be backward compatible with incandescent bulbs.

So we are stuck with the many absurdities of triac dimming. This "leakage current" is one of them.

Obviously your fixtures have multiple bulbs, and one "diagnostic technique" we advise is to replace ONE of your LEDs with an incandescent bulb. If the problem suddenly goes away and the remaining LEDs behave properly, we know we are dealing with this problem.

Lutron, a dimmer maker, threw up their hands and came up with a gadget called the "LUT-MLC", which does the same thing as that 1 incandescent, giving a bypass path for that leakage current. It is wired in parallel with the existing bulbs.

Some makers of "dimmable" LEDs put similar electronics in their LED "bulbs". Others do not, and expect you to use a better dimmer (e.g. that uses neutral).

I can't say 100% for sure, but my hunch is that the fan light control is never truly off. When you turn it "off", it is actually "lowest possible dimming setting". In other words, some current is still flowing. With an incandescent bulb you would not see any glow at all. With an LED, what you see will vary depending on the type of driver in the bulb. With a non-dimmable LED things would likely be much worse - instead of a glow you would probably have flashing lights.

If my hunch is correct, this is a very poor design for three reasons:

The last is an important thing to consider. With a traditional light switch, there is no current flowing when the switch is off. That makes it safe to change a light bulb because, assuming everything is wired properly, there is no current flowing and therefore no concern about accidentally shorting hot to neutral/ground in the fixture. But with some power flowing, which appears to be the case here and is also common with any smart switch/motion sensor/electronic timer that does not require neutral at the switch, there is a small but real possibility that an incident while changing the light bulb could result in power going where it shouldn't.

Why? Probably to save $0.50, maybe less. Either they used a dimming module that doesn't actually have a true "off" mode to save a few cents on that module, or they may deliberately flow power through the lights, even when "off", in order to provide power to the communications module. That last possibility saves a few inches of one wire and one internal connection. $ 0.50 tops. But at retail that would become a few dollars, and at the low end of the market on these things are often very competitive/price sensitive.

As far as what to look for, short of replacing the entire fan, just keep trying until you find bulbs that work well for you. That means "dark enough when nominally off" + "bright enough when on" + "color that appeals to you". Very subjective.

Dimmable is not as binary a concept as it sounds. The word "dimmable" used in product marketing is, well, just marketing.

Every bulb is "dimmable" in the most cynical sense. Remove power entirely, it becomes much much dimmer. Probably off although you'll find lots of Questions here in DIY about bulbs that continue to glow even with one of their wires completely disconnected. Keep reading but don't expect total clarity.

There are different kinds of dimmers, some that vary line voltage, some vary pulse width or shape in various ways. Read this for a primer.

To greatly simplify ... imagine a dimmer that retains a pure sine wave form and just varies voltage in a nice clean way from 0% to 100% linearly as you change the setting. (A real-world dimmer that actually behaves this way would be very expensive and sold as a scientific instrument). You'll find one LED bulb will vary its brightness in a fairly smooth, linear way as the dimmer setting goes from 30% to 70%, another will work from 50% to 100%. Some will react in a non-linear way. "Non dimmable" ones will just snap on at some setting ... which you can think of as an extreme non-linear dimming.

"Dimmable" LEDs have electronics that detect input level and control the light brightness accordingly. But when you look at the different kinds of dimmers and how they work it's not hard to see how the design of those electronics might not give you exactly what you want.

The dimmers in ceiling fans are electronic, but usually they are made cheaply and designed for one specific kind of bulb at one specific wattage. You shouldn't expect too much from them in the way of dimming capability unless you use the exact kind of bulb recommended in the instructions.

Anecdote: I have a Honeywell Z Wave dimmer that has a reactivity setting. You can map the Z-Wave controller input request (0% to 100%) onto an output voltage (for example 30% to 100% respectively) that you devise experimentally according to what kind of bulb you have screwed in. That way Z-Wave program scenes that call for say 1/2 brightness can achieve it even with mixed light bulb types (so long as they are consistent on any one dimmer).

Your fan dimmer probably retains say 5% voltage (but remember it may be playing with pulse shape in arbitrary ways) in its "off" setting and for a 40W incandescent bulb that probably creates 0% brightness. For your two LED bulbs it creates two alternative behaviors. The only way to turn them off is to remove power from the wall switch controlling the fan/light.

19
What should I do to increase the dimming range of LED bulbs?
5
Trouble with LED bulbs
0
Can I replace a Maximum Bulb Wattage (Watts) 25 halogen light bulb with 5w LED light bulb? Is it safe?
0
Why do some LED lights go dim while others go out completely?
1
Questions on smart bulbs (Zigbee type) in an old ceiling fan/light fixture
1
LED Light in Ceiling Fan only works with a non-LED next to it
0
One Flickering LED Bulb On Switch with 4 Bulbs
0
After replacing incandescent bulbs with LED bulbs, why am I getting flickering from some of them, but not all, on dimmer switches