Is this water hammer? Why are my dead legs not helping?

I live in Houston, where we had a severe freeze a few months ago. I opened a bunch of faucets to drip, but one of my pipes (above a master closet) still burst. That forced me to turn off the water and drain some sections of pipe to patch the hole with putty and tape. Since then, whenever an irrigation valve opens (after a long period of them all being closed), I hear the pipe near the patch banging on the ceiling joists upon which it rests. The pipe turns a right-angle corner at that spot. I've got pictures at the bottom of this post, but here are my questions:

Here is a simplified diagram of some of the pipes in question. Water supply from the street enters from the left. 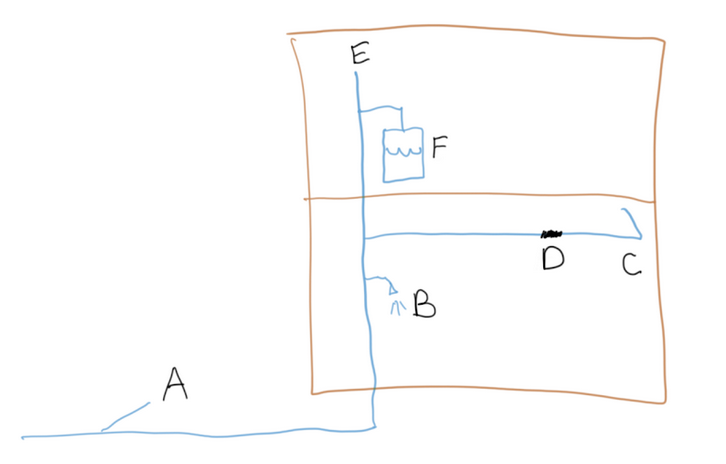 Here is a video showing the sound and location of the hammering. This is not a typical example, but hopefully it is good enough. Usually it is much louder and much faster, maybe two or three times.

Here is a picture showing a clearer angle of the clip holding the pipe onto the joist, and of the right-angle turn at the end of the straight pipe. 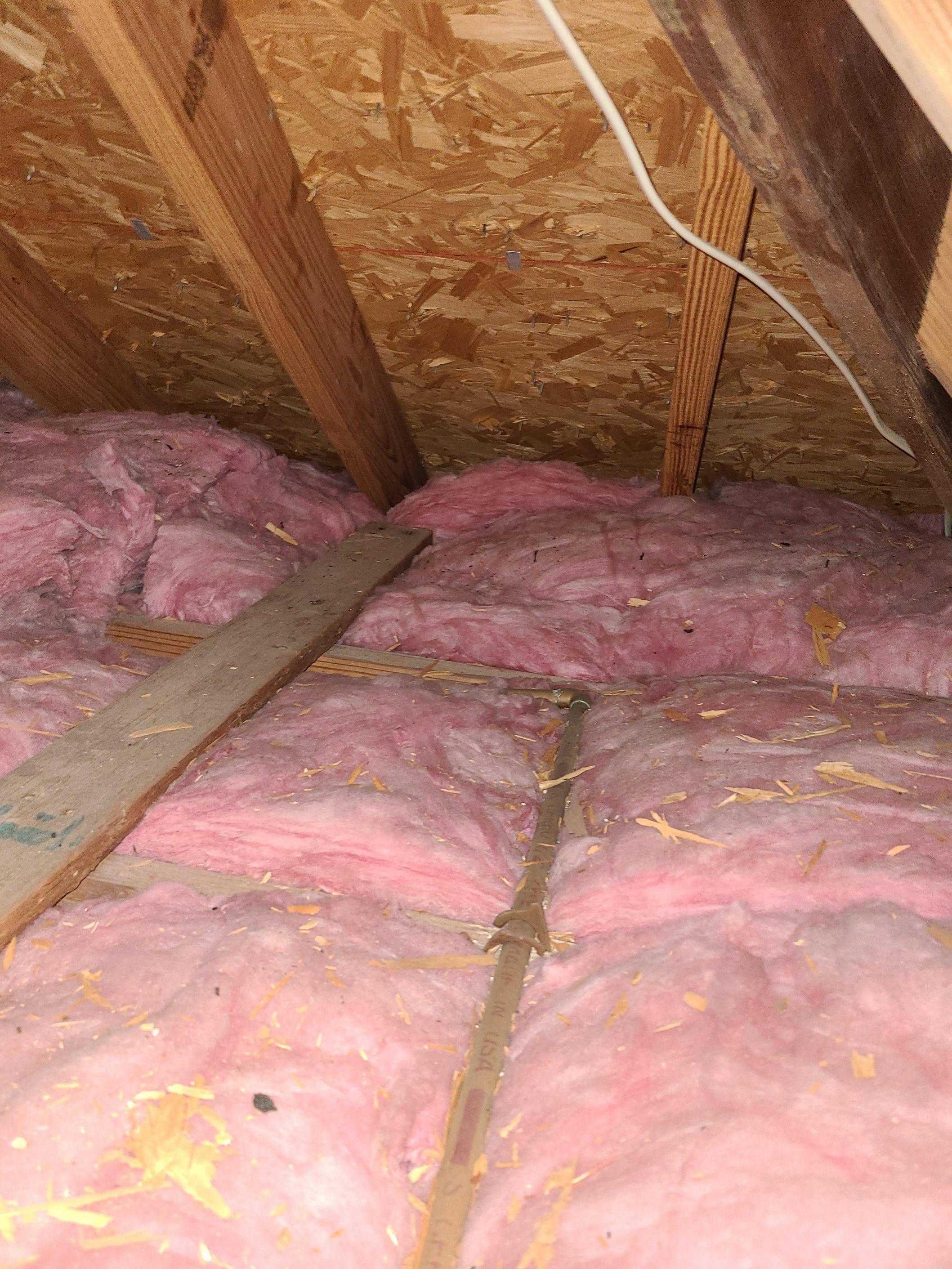 Here's a picture of my patch, with my finger resting on the pipe for scale. 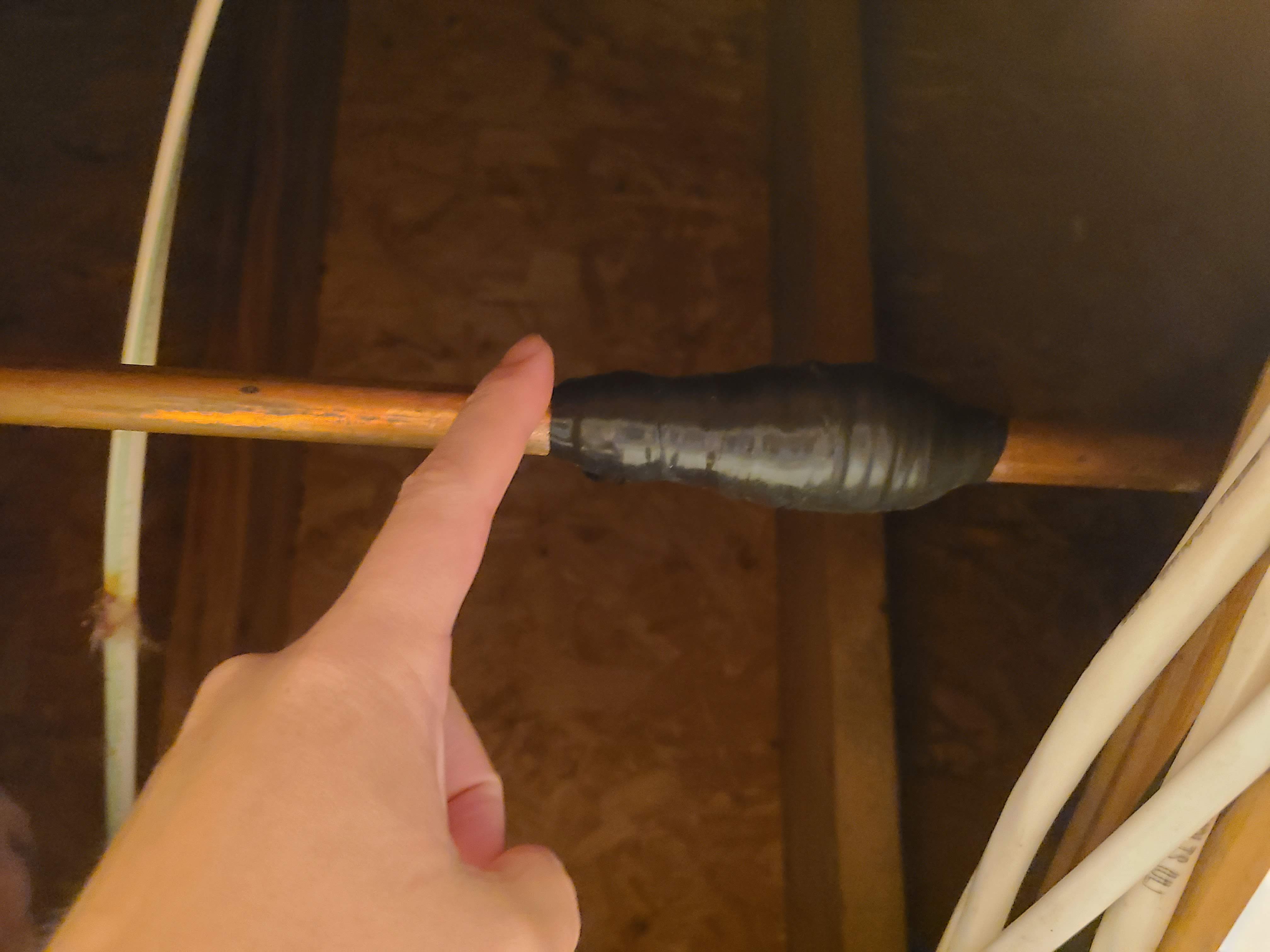 Here's a picture of the dead leg on the cold supply side. Pictured is another dead leg wrapped in insulation for the hot discharge side. This setup is replicated for the water heater on the other side of the house. 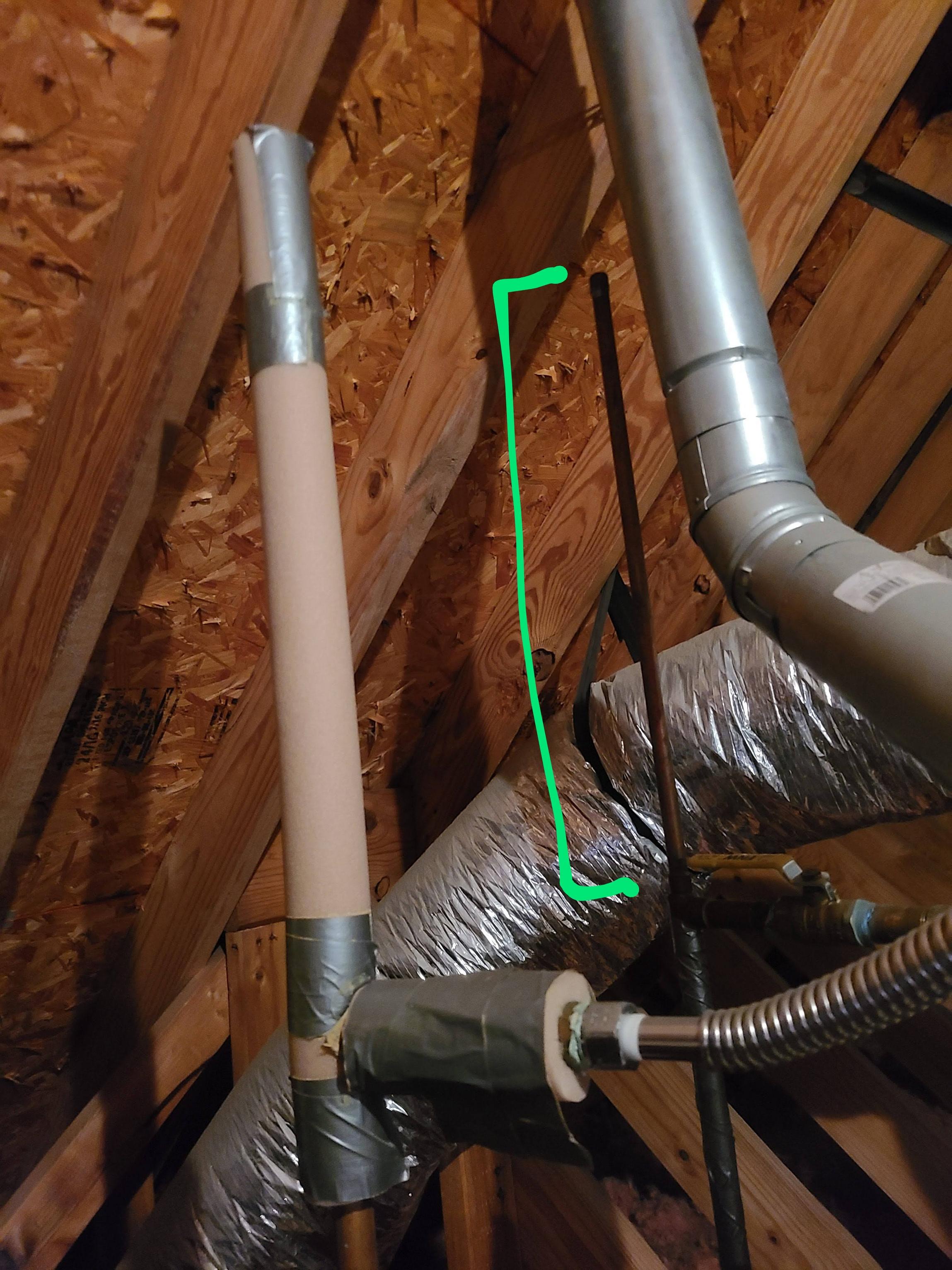 The Jack hammer of the pipes is water hammer (physical movement)

Why are your dead legs not absorbing the shock. 2 possibilities; 1st the dead leg has filled with water, I have heard of this happening but have not experienced it. Draining the pipe and allowing the dead leg to drain and refill with air.

Second is the new patched section of pipe allows for more movement. Anchoring the pipe alone can reduce or eliminate most water hammer.

I would first take the easy route to drain the dead leg lines and allow them to refill with air , to eliminate the water hammer secure the pipes that are moving.

Between these 2 methods I have rarely seen water hammer be a problem unless the supply sizes and dead leg were undersized.

These dead ended pipes are notorious for swaying when left unstrapped. The patch added a lumped weight which exacerbates the problem.

Rather than moving the pipes, include additional support.

The rapid succession you hear is the pipe resonating from its own weight and elasticity while knocking against wood, and this happens when it is hit by a one shot water hammer from a closing valve. A thick patch adds weight to a specific spot in the pipe, which can increase the severity of the resonance.

Install some lumber that can run along the pipe, and then use a mix of brackets, braces and all-round to attach each length firmly at two opposing ends (e.g. its top and bottom) to framing of the house. Be careful not to penetrate fasteners through any roof or wall sheathing.

The damaged section of pipe may be creating turbulence of a frequency at or near a resonant frequency of the unsecured pipe. If the sprinkler valves open much more quickly than ordinary manual manipulation, this could set up time varying turbulence.

First thing I would do is replace the damaged section of pipe with a new section of pipe. If you are not experienced with sweating copper fittings, you could call a plumber.

Not the answer you're looking for? Browse other questions tagged plumbing water water-hammer or ask your own question.

1
Periodic surging sound from plumbing
3
How can I turn off this water valve?
0
Recurring banging in water pipes, cured by draining system
2
Irrigation backflow preventer spigot location question.
0
Water hammer - where to place arrestor
0
Direction of tap out of water heater
0
Dead end in pipes and legionella risk
1
Water leak at outside copper-PVC pipe connection
2
How can I stop pipes from vibrating / rattling / hammering after a new pressure valve was installed?