How can I stop pipes from vibrating / rattling / hammering after a new pressure valve was installed?

I tested the water pressure last month and it came up at 89psi. My old pressure regulating valve said it would only go to 75psi and turning the bolt didn't change the pressure, so I assumed it was shot and replaced it. No leaks and the new valve appears to be installed correctly according to the arrows on the housing.

I also removed what I would best call an S-curve in the copper pipe after the pressure regulator and before entering the house. I had googled it and couldn't find anything about why it was there but maybe it acted as an air chamber - not sure. I removed it since it seemed unnecessary and only there to line up the pipes. This then let me put the whole unsightly assembly in a valve box underground. Here's a pic of the before: 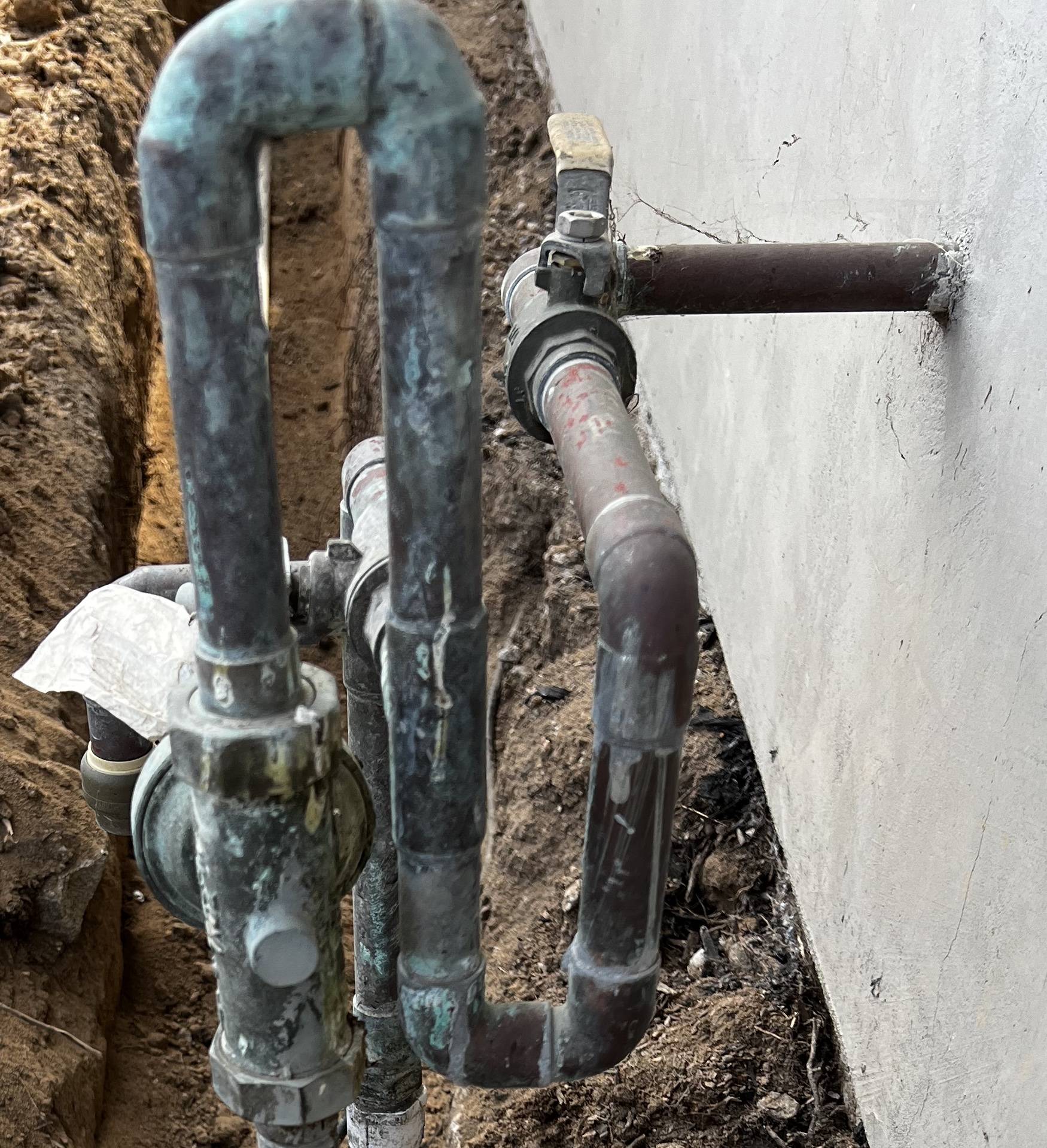 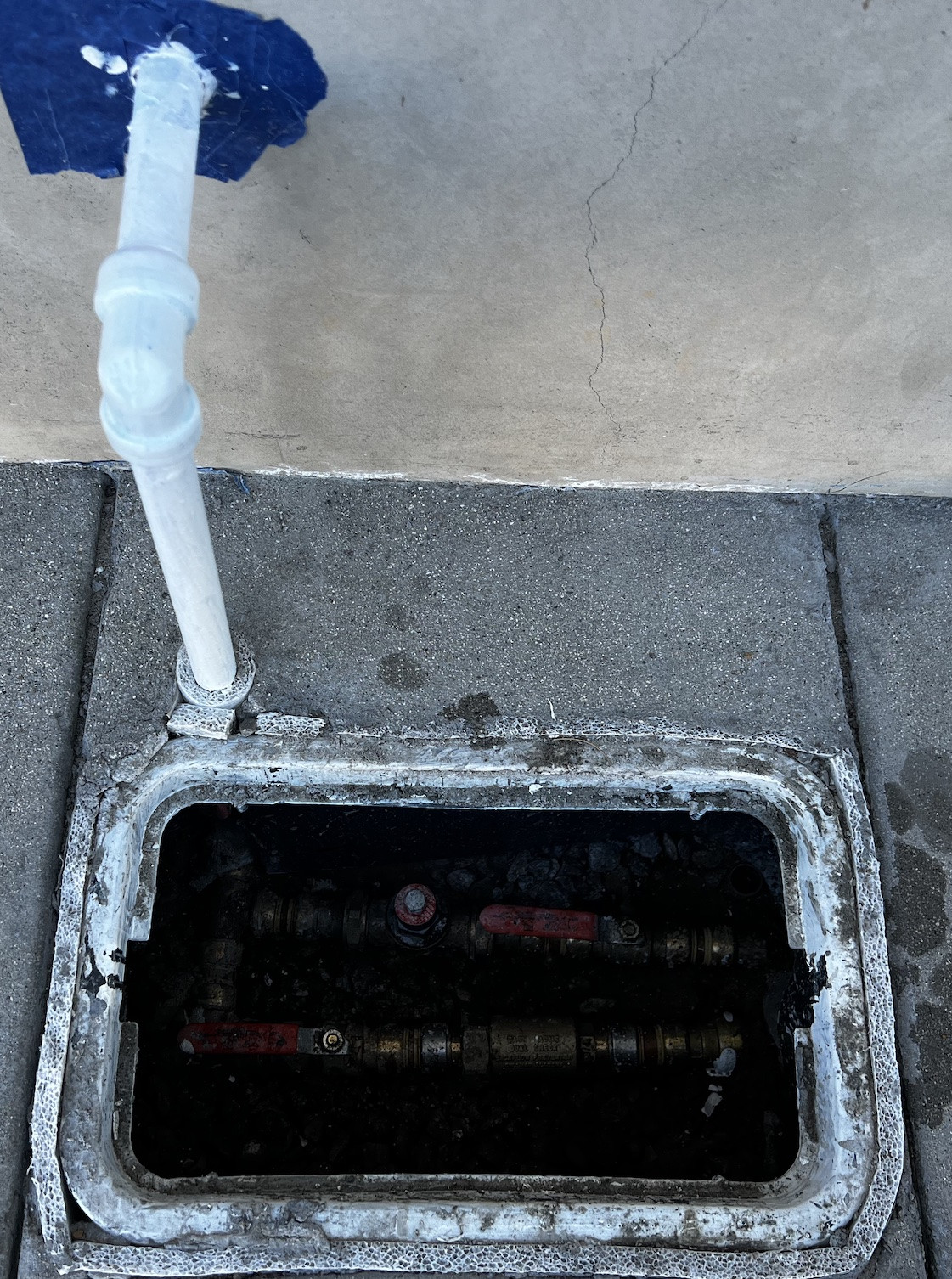 Water comes up on the right, into a ball valve, into the pressure regulating valve (PRV), then tees up to the house via ball valve, and down to my yard's irrigation / hose system after a dual check valve. There are pressure vacuum breakers before the sprinklers. 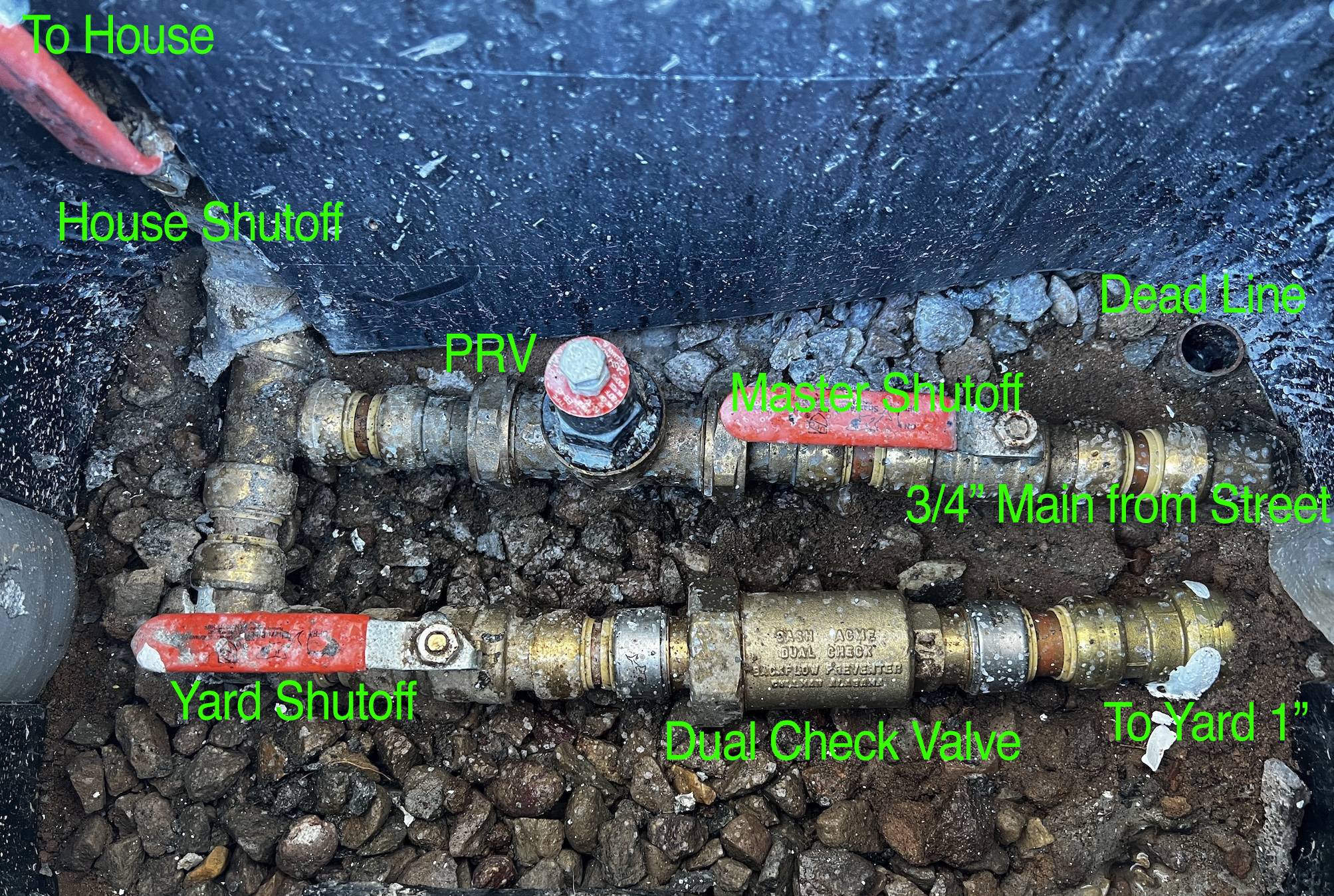 Now, when either the master shower is turned on on the second floor or the hose is run from the end of my irrigation line, the pipes in the opposite end of the house on the first floor (near where the water enters the house) start to vibrate / chatter and make a lot of noise. I have just discovered that the noise seems to be coming from where the main takes a 90-degree elbow and moves into my main shutoff valve and the PRV. Please see the Youtube video of the vibrating here and see it in more of a closeup with a focus on the the vibrating stopping and starting here.

As suggested below, I tried slightly closing the valves, but that didn't seem to do much. I then tried to adjust the pressure bolt on the PRV and it seemed to work for when the hose was on. I tightened the bolt until the vibrating stopped, but then when the irrigation kicked on it starting vibrating again. So, I adjusted it again and this setting only stopped the vibrating when both the hose and irrigation were on. I found something else my experimenting: when I turn off the valve to the house, there is no vibration at all.

I would have to guess that either the new pressure regulator valve or the removal of the S-curve is causing this. I can't tell if this qualifies as water hammer. Does that sound right and how could I stop this from happening? Would I have to re-add the S-curve and remove the valve box? Add an expansion tank? Remove the dual check valve? Better secure the pipes in the wall?

Any help would be greatly appreciated!

The effect you observe is likely not water hammer.

Water hammer occurs when a traveling column of water (in a pipe) is abruptly stopped, e.g. when a solenoid valve shuts. The weight and velocity of the water act like a hammer that is abruptly stopped when it for instance hits a nail. The kinetic energy is partially absorbed by a brief expansion of the pipes and partially it is reflected as a pressure wave. Hammering is usually lead by a strong bang followed by weaker hammering tailings that rapidly die down.

What you are observing is a resonant oscillation started and maintained by the mechanical turbulence in flowing water.

Any mechanical interconnection of springs and weights has the potential of forming a resonant system. (Electrical systems are similar, with capacitance and inductance.)

With such a system in place you need just a small amount of mechanical agitation (a.k.a. "excitation") for the resonance to build up.

Depending on the "damping factor" of the resonant system, the oscillation can even be unstable and reach ever greater amplitudes until the components breaks.

This is how bridges and buildings collapse from vibration in high winds.

In your case it seems that the resonant system is formed by the weight of the water and/or possibly the reflection of pressure waves in long runs of rigid pipe. Shutting sections off changes the resonant frequency and the damping of the system, which is why the oscillations occur in certain configurations (this valve open, other valve closed etc...). A soft hose buried in soil can work as a damper, the free elastic expansion of a hose above ground can work as a spring, a loosely mounted pipe can buckle, a water column forms a mass, a firmly encased column of water can work as a wave guide for pressure waves etc..

The excitation that starts it all and keeps it going is caused from turbulence that occurs in the piping when water flows. Turbulence occurs where piping changes diameter, takes a corner, splits etc...

The resonant system is further refined by the addition of non-linear elements, e.g. the turn-around delay in a check valve can exacerbate vibrations, insufficient valve force in a PRV can cause it flutter etc...

It's possible you just have a bad combination of some of the above.

What's hard or nearly impossible to change are the lengths of pipe or their configuration (trunk/star vs daisy chain).

What you can easily change is the model of the PRV and the check valve.

It's not necessarily the case that you have a bad model, but more that the specific characteristics of the model you have might be forming a resonant system with the rest of your plumbing.

A few steps you can take:

Water hammer is a common cause of noise complaints and even damage in water supply plumbing. It occurs when the velocity of water traveling through a pipe is high and a valve is suddenly closed. The mass of water moving at high speed presses against the suddenly-closed valve causing a spike in pressure.

It doesn't sound like that's what is happening here. You've described a noise that happens for as long as the master shower valve is open and water is flowing -- conditions opposite of those in a water hammer case.

I think somewhere you have a valve fluttering: rapidly opening and closing, but perhaps not closing all the way. It might be oscillating between "more open" and "less open" and just happens to resonate in your system. The new regulator seems likely to play a part but I'm not sure this means the regulator is faulty per se.

If the master shower valve supports it, try setting the water to a lower flow rate. Also try easing the valve open slowly. Does the character of the vibrations change?

Expansion tanks can fail, and they also can require maintenance. Generally an expansion tank has an air bladder which must be maintained within a certain range of pressure (it varies depending on the pressure of the water system). If the pressure in the air bladder leaks down, or if the bladder fails and becomes filled with water, then the tank won't operate properly. Repair or replacement could be needed (and there are probably other questions on DIY focused on that topic!).

Edit after addition of photos and videos

That's definitely not a water hammer situation -- those are characterized by the bang of a sudden impulse followed by a decaying ringing effect. In your video the pipe is at rest and then we actually see the oscillations grow over a half-second or so. It looks quite smooth; my earlier guess of valve chatter might manifest more harshly. This looks like resonance -- the mechanical equivalent of a standing wave oscillation in an electric circuit.

A technique in circuits (transmission lines in particular) to tune or de-tune so that resonance will or won't occur is to add "matching stubs" to the line. An article at WaterWorld about acoustical resonance in pipes suggests this technique can be appropriate for hydraulic (water) systems too. An attempt to calculate the length of a stub for your application is far beyond the scope of an answer. I would guess that if there's a place you can easily add a tee indoors or outdoors then you could add an arbitrary-length pipe stub and see what happens. It's entirely experimental -- if I were doing it I'd start with something long, say 7 feet or so. If it doesn't have a positive effect then cut off several inches, re-cap, and test again.

The S-curve you removed might have been helping to suppress this condition. Whether it was just dumb luck or was an intentional fix is impossible for us to say.

Consider this example. In electronics resistance and capacitance are used to filter out voltage spikes. It could be that your s-curve was functioning as a resistor. Also a pressure tank is basically a capacitor. Another thought is your new regulator looks smaller in diameter. This might result in a hysteresis in the way it functions. A difference (gap) in the opening and closing pressure that makes it open and close rapidly. If you touch it during the "flutter" does it feel like it might be the source? Try running the shower and then slowly closed the ball valve next to the regulator until you see a slight decrease in flow. Leave it that way and see if the problem goes away. Not a real fix but you might learn something about the problem.

1
Why do I have almost no water pressure after installing a new valve?
3
Is it possible to control water pressure using a ball valve?
0
Home water pressure consistently exceeds 150 PSI
2
Does water pressure drop when opening a faucet?
1
Low foghorn noise after new pressure reduction valve and expansion tank installed
0
Water Pressure question and pipe sizing
0
How can I stop a leak in a shower valve?
2
What could cause pulsating water pressure inside house?