I have a pretty standard to North America wooden carcass home - two floors above ground, and a sub-basement below, plus an attached garage, sitting on top of it's own foundation.

Over the summer I had a room built over the garage, which went reasonably well, everything approved by the city and the contractor's architect.

During the recent snowfalls, I guess a large amount of weight was added to the new extension and I saw that the floor in the 2nd floor room adjacent to the new space kind-of bent upwards near the wall next to the newly added space, with the hardwood tiles spreading out.

I don't see any other damage (at least so far), but I wonder what I should do about it - if I simply fix the floor, will I be ignoring a larger issue? Will it actually cause even more damage in the summer when the weight of the snow is gone and the beams that are bending straighten out again?

Should I simply call the contractor and drop the problem in his lap, or get an inspector to take a look at the damage first?

Note - I'm in Canada, so the snow and extra weight isn't something rare like you'd expect down in Texas for example. I do believe the contractor should have examined the existing structure while he had the walls open and determined the existing beams are strong enough to connect the added structure to.

Here's a closeup photo showing two floor pieces, one that remained in place and another that moved: 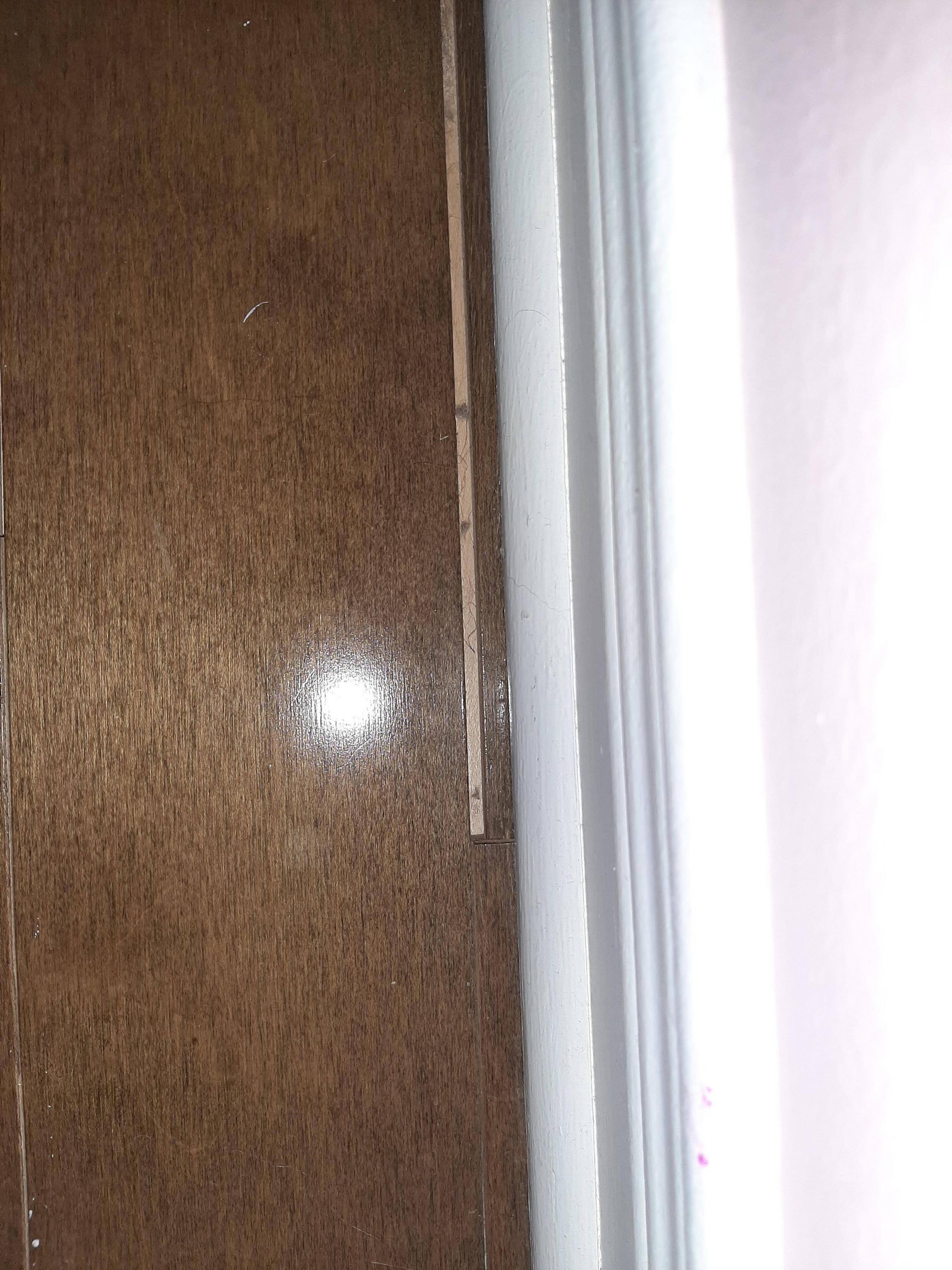 I don’t know Canadian law, but in America 1) the contractor must be licensed, 2) a licensed contractor must have a bond to pay for mistakes if notified correctly, 3) be a member of a state licensing board that can review and make determination of “fault” and holds the bond to pay for such corrections. (There is an automatic 1 year guarantee period ...2 years for roofing in U.S.)

So, you’re on the clock. First, go take pictures immediately and make sure the pictures clearly show the problems. (You may need to use a level and square in the pictures to successfully illustrate the problems.) Second, I’d send notifications. Notifications should have pictures and clearly State the problem and what you want done to “fix” the problem. (You’ll need to hire an “expert witness” ...probably another LOCAL architect.) Notifications are by Certified Letter with return receipt. I’d send one to the contractor, with copies to his architect and one to the licensing board and one to the Building Official that signed off on the Permit. I’d also hire an attorney that is familiar with construction law.

If the contractor says he’ll “fix” it, then you want 1) what he intends to do 2) how he intends to do it , and 3) when he intends to do it...in writing with his architect’s signature. (Be careful they don’t stall you past the 1 year completion time. The 1 year issue starts when the Building Official signs off on the project, I think, but ask your attorney and licensing board. ) If it takes longer than a year, the bond disappears and the contractor can just change the company’s name and keep building.

The reason I tell you all this is because, as you say in your statement, you 1) don’t know how bad it is, 2) how to fix it, 3) if it will be a problem in the future. No one here knows either. You need an expert to examine it and offer a “means and methods” way to solve your problems.

I’d call the contractor and let him know what you are intending to do and offer to meet him at the site. You’ll get a good idea of what kind of contractor he is after he sees the problem.

Not the answer you're looking for? Browse other questions tagged construction damage extension or ask your own question.

1
220v extension cord
2
Granite and water damage
0
Can I use a 16/3 extension cord for a refrigerator?
0
Could a “missing phase” result in damage to electrical household equipment=
0
a. c. nielsen equipment causing damage to outlets
0
grounding wire extension
1
Extension Cords needed, can't find
1
How to keep a downspout extension from coming off?
0
Planning a new roof for future roof mounted equmpment