What should be done to check the capacity of a 100+ year old wooden floor joist?

A 7.5cm x 20cm wooden floor joist from an apartment constructed in 1906 in Rotterdam, the Netherlands will be subjected to an increased load. The type of loading the floor joist will experience is already carried by other floor joists with the same cross-section.

My question is: Is there anything else which should be checked? 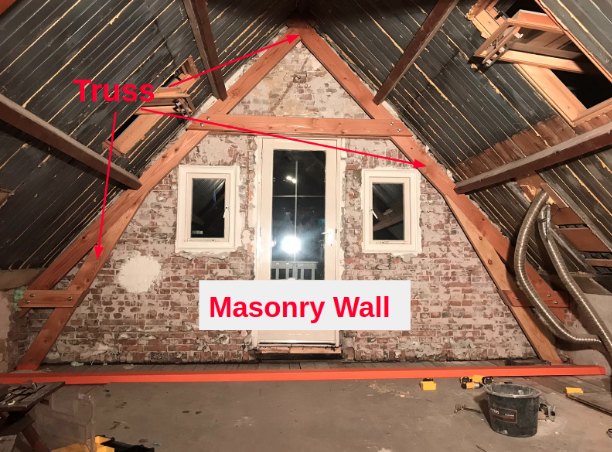 The truss elements are all 16.5 x 6.5cm douglas fir, the truss is resting on a 7.5cm x 20cm wooden floor joist from the original construction. Both ends of the wooden floor joist are embedded into the masonry wall and the floor joist is supported by a 12cm x 7cm wooden fill beam at gridline B in the section cut below, this fill beam has adequate capacity in moment and shear for the additional load applied on the fill beam from the truss. Additional drawings of the structure can be found in this pdf. 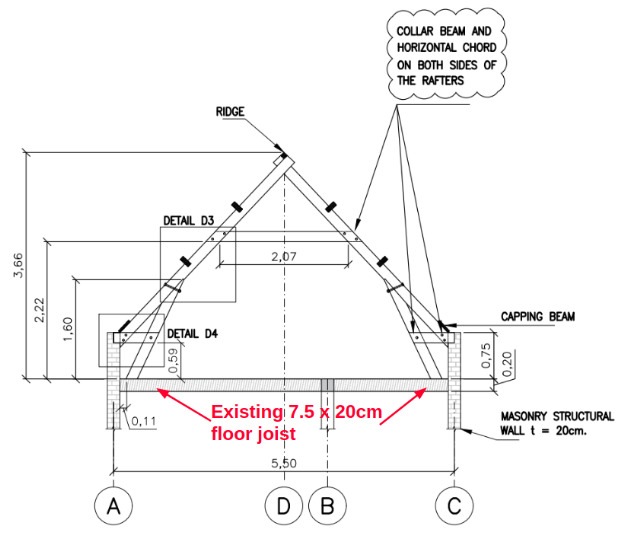 The new truss will support 1.7 meters of the roof. However for simplicity and to be conservative it was assumed this truss would support 3.4 meters of the roof. The structural system was modeled in SAP2000, and a full calculation report can be found here. The rafter element of the truss had the largest applied moment and shear. According to Eurocode NEN-EN 1995-1-1: 2005 the rafter element on the truss has the following Demand / Capacity: 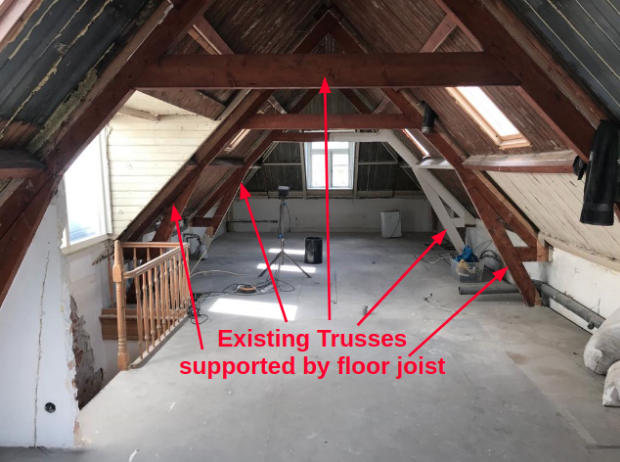 The floor joist, which will support the new truss was thoroughly inspected for damage and minor white rot was found. The white rot was removed, and the floor joist was subsequently cleaned and painted. More information about this can be found in this question.

When the renovation is complete the building envelope will change. However, as discussed in this question and answer the system has been thought through to prevent water and fungal damage.

Is there any reason which I have not thought of as to why this new system will not work?

That’s a lot of information to review, and I’m American so I don’t know anything about metric, but I’ll try...

Your layout is somewhat different than that shown in the “full report” and picture in Section 1 at Zwae.... There the glass windows are in the same wall as your dormer AND at the same level. However, in your building the dormer is in a wall 90 degrees to the glass walls AND in the roof above the main room.

Be careful of using others reports that are similar and not exact. This could affect your structural design. In this case you have twice the glass in the walls as in the report for the unit at Zwae....

I don’t know if you are located in a high wind area or seismic active area, but if so, you’ll need special connections at each side of your windows and special nailing into your plywood roof sheathing.

Also, Based on the size of the joists and their span, I’d guess they are not more than 4’ (1.2 m) on center. This would be a minimum requirement, because your joists at 4’ on center will only support about 60 lbs. per square foot (Live Load and Dead Load) at that span.

Wood that old has dried out and could have some significant “checking”. This can reduce the joists strength and I’d recommend you visually inspect each joist to insure their integrity.

Not the answer you're looking for? Browse other questions tagged wood structural construction old-house or ask your own question.

2
Cause of white rot on floor joist
0
Can a vapor barrier follow the profile of floor joists?

5
What should I do about this load bearing wall that is only supported by a joist floor?
8
How can I safely remove and replace a wall?
0
Is it safe to use old, rotted wood fixed to an attic joist?
0
making converted attic into full height (roof tear off)
0
Can someone help me to verify if my balcony can handle the load of a hot tub
2
Cause of white rot on floor joist