Homebase extractor fan. How to remove the front cover?

I bought an extractor fan from homebase. One of these: https://www.homebase.co.uk/humidity-controlled-extractor-fan_p594561 . I didn't get very far with fitting it though because step one is "Remove the front cover" but this is proving very difficult.

I have made a little video of me explaining the problem (with a bit of help from a 3 year old!)

On the top edge there is a clip which pops open with a screwdriver, and it start's coming open (I can pull it apart about 4 millimetres and start to see inside from the top), but at the bottom edge of the fan there is no clip, and the front cover does not want to come off at all. I can just about prise it apart by about a millimetre. I can push a knife blade in there along the whole bottom edge (see following photo), but something in the middle near the bottom (by the red light) is holding the front cover on tight. 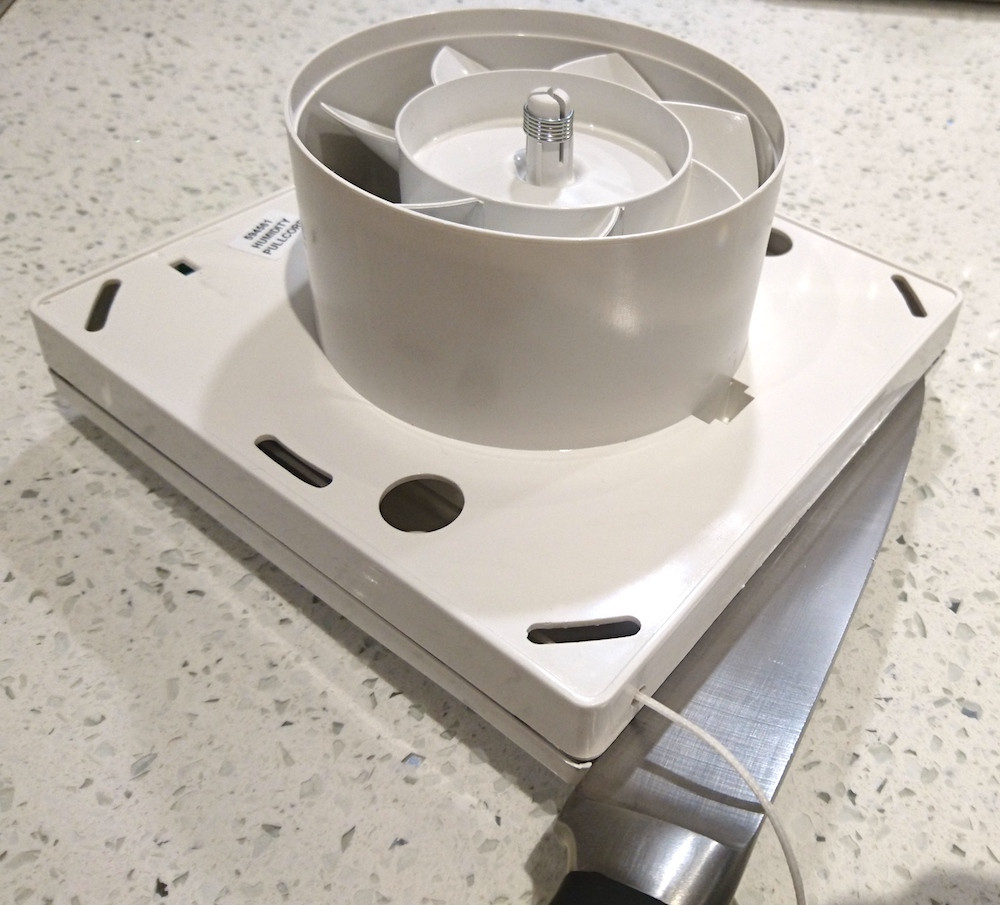 There are various holes which look to be mostly for the screws which will hold it to the wall (from the direction of inside-out, meaning I need to get inside of course). Near the middle there's an interesting looking screwdriver-sized hole you can see in the photo, but solid edges all around. No clips or moving parts to poke at. I can't see any other clips or screws, but I feel like I must be missing something. I could just pull harder, but it feels like I'm at the limit before plastic starts snapping.

Oh I almost forgot the funniest part. The instructions have a sentence explaining how to do it! But it seems to be badly translated or something. Here it is word for word:

It's strange because the rest of the manual is well written. Just that one sentence... which is the sentence I need! Where is this "hole plug" / "self tapping screw"??

Maybe I could find out more from a manufacturer, but it's just generically homebase branded. "Homebase Extractor Fan. Humidity Control Model". There is a sticker on the fan itself with the numbers "SPA255 B141319"

Took me a while but the red light is just a cover for the screw, use a small screwdriver to lift it out.

Not the answer you're looking for? Browse other questions tagged fans or ask your own question.

2
De-coupling fan and lighting switches?
0
How is this bathroom ventilation fan attached?
1
Dual Evaporator Refrigerator — Evaporator Coil and drain Freeze up… Internal Fan Operational?
4
remedying ceiling fan horror-show
2
mounting fan/light in very tight enclosed space over shower
0
Bath room exhaust fan not working. The light is working on a separate switch right next to the fan switch
1
How can I remove my bathroom extractor fan's cover?