I discovered that I have 3 valves that are wrapped around a gigantic tree root; see picture. I noticed the dirt was moist. And I know that at least 1 valve is bad. Possibly 2 in this physical area.

I am getting a little worried that this is a job that may be require some advanced skills or a lot of man hours to fix. I am probably going to call a professional.

What should I be looking to do here? Reroute the lines? Cut the roots? Any tips or suggestions? 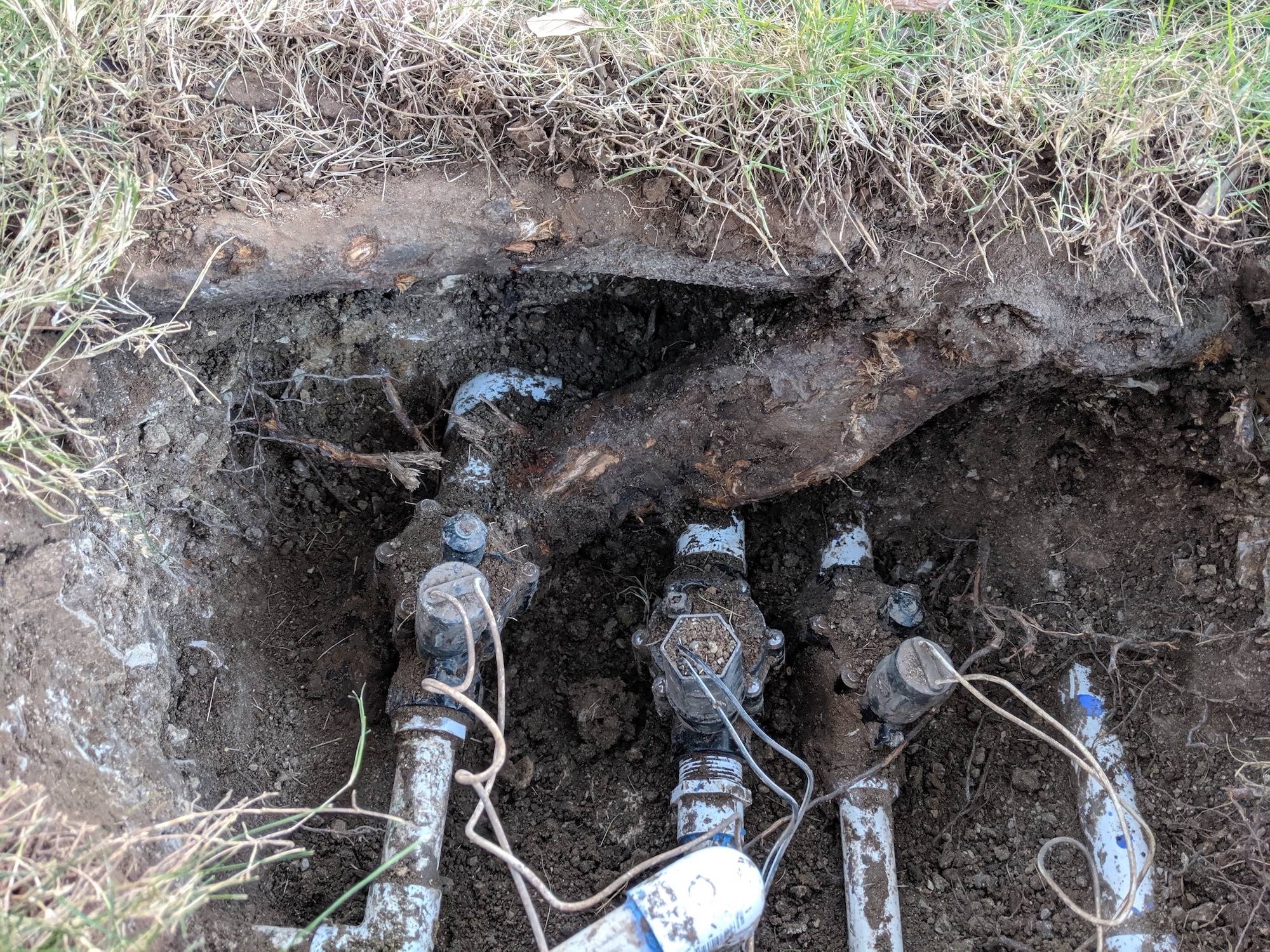 Part of the problem is that I'm finding it hard to find people that repair sprinklers. A lot of companies tell me they only do new installations. (North Texas area)

I don't leave my smartphone out in the rain. Under that same logic, I don't install GFCIs outdoors either. Outdoors is a hostile place to equipment.

Those poor valves there, seem to have wound up in Fangorn Forest. My first reaction would be to get them outta there.

I can see not wanting to mount them indoors because if they leak, you have a flood. However, you ought to be able to find a nice, safe location for a control cabinet... Somewhere you can keep these out of the weather, and far away from carnivorous flora. Where the valves can be manifolded and easy to cutout and swap, and where the wiring can be done "in a neat, workmanlike manner" like Code requires. When you need to get to something, you just lift a lid and it's all at arm's reach.

Obviously you'll need a bit more pipe, but by and large, pipe is fire-and-forget. The first you hear of a problem is when you get a boil of water instead of normal irrigation, then you dig up the pipe and lay around the problem. Won't happen very often.

Obviously, laying pipe next to tree roots is asking to have a problem later; don't do that at all.

Literally working on a similar problem, minus the gigantic roots...

Before you dive into the roots or replacing valves, consider just checking the valves for simple issues and troubleshooting around those principles. There are a plethora of videos on "how to fix a leaking sprinkler valve" - try some of those; if you have a screwdriver and won't melt from getting wet, the experience can provide a wealth of information just by diving in. This one is descriptive and educational - it might not solve your problem, but might give you enough insight to narrow your search. Worst case scenario, you break something and hire the professional you were going to hire anyway to install a new valve.

TL;DR: Troubleshoot the valves with online videos. It's not as scary as it sounds.

I suggest you consult a tree expert who can determine if the roots can be cut without injuring the tree. If so then maybe that same expert can cut and remove the roots so that you know it was done properly. Once those roots are out of the way you can probably repair/replace the valve yourself.

The roots are on the high pressure (more vulnerable) side of the valves. That's a pity because that has to be done to a higher standard. I reckon most people would redo the manifold (valves and pipes complex). If the pipe on the right is the inlet water then you can choose where to put it; but perhaps in a nice pit box this time.

Do you want the tree around ? If so, relocate the valves. If you are indifferent about the tree, then cut those roots out, or cut the tree down ! Turn off the water before commencing any work.

That one root going under the left valve is not necessary as there are other roots of similar size all around the tree. Cut that one out, above and below the valves/pipes. Leave that big surface one. Did you have a valve box covering the valves ? I have two boxes about 6" apart, 3 valves each. They were put in at ground level,"IN" a flower/shrub/tree bed. They fill with dirt from the bed sprinklers and are full of roots because all the valves drip a little thru the little manual knob when the solenoid opens the valve. Often those knobs drip all the time. I dig the dirt and roots out every 6-8 years. This year, I am adding 3" risers to the existing boxes. They reuse the same lid that was on each. I will try some water proof construction adhesive to try to keep the water/dirt out at the joint where the CARSON BRAND extension sits on the Carson 1015 box. If I ever get another house/yard I will put ALL valves ABOVE GROUND where they can be easily "serviced". I will build fake rock, Statue, some "Yard Art" of some kind, to camouflage (paint all GREEN ?) or completely "hide" the valves.