Are these sprinkler control valves?

I just bought a 50+ year old house. I only ever grew up with electronic sprinkler controls, and so far I haven't been able to find any sprinkler controls in the new house. However, there are exposed pipes and drip heads coming out near various plants, so I know there is a sprinkler system (or at least has been). 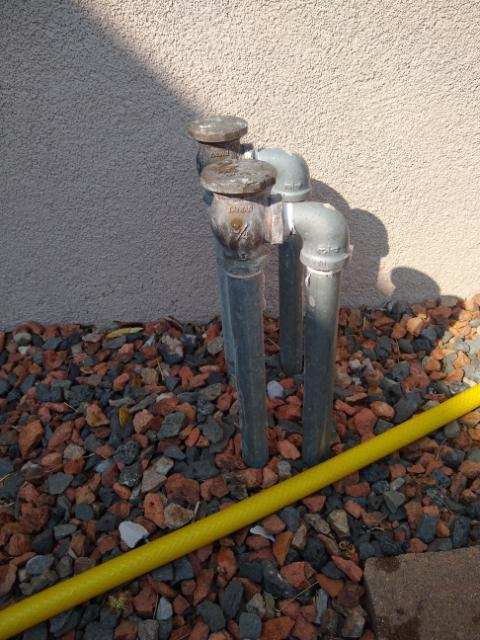 They are vacuum breaker valves.

They prevent the water in the irrigation lines from being sucked into the city supply lines when city water pressure drops by allowing air to enter the supply line.

It's like poking a hole in the side of a drinking straw.

There is nothing that you manipulate on those.

There is also an inline backflow preventer valve does not admit air, but closes mechanically to prevent water from travelling in a reverse direction.

Not the answer you're looking for? Browse other questions tagged water sprinkler-system or ask your own question.

7
How do I "un-winterize" my sprinkler system?
3
What is causing the last two heads in a sprinkler/irrigation system to have no water pressure?
0
dripping sound inside wall
1
Troubleshooting sprinkler system pressure
2
Sprinkler valves are surrounded by tree roots
0
Drip water system low pressure
2
I know there is a pressure vacuum breaker here, but what is the rest?
1
Sizing sprinkler zones for water well pump