broken wire in the wall?

Thanks in advance for your help.
I have a run in a 20 year old house that is about half out. about half the outlets and 2 overhead lights won't work.

After some troubleshooting, I took 40' of wire left over from an old job to jump from the last working outlet to what I think is the next, about 10 feet down. So, twisted the Jump wire to the panel/working side and connected to the next outlet. Lights and outlets worked throughout the circuit.

Disconnecting the jump wire and removing the first outlet altogether, I twisted the panel wires with the inside wires - basically just took out the outlet. No voltage measured at the 2nd outlet ends - measured at the wires having disconnected the from the outlet. So, nothing in line but a splice.

Disconnected the inside wires from the panel wires, and used the jump wire to test continuity inside + jump wires twisted together. The white was about "70" and the black was very high - about 500. That was on the R1K setting. Anything less than 1K doesn't measure, even probe to probe. So the numbers are probably only useful for relative purposes.

Ran scenarios inside black and outside white connected to panel - 0 V at the other end. Outside black and inside white 120V. Outside and outside 120V of course. Inside and inside 0 V. So, black doesn;t work. Again, jumping the inside wires worked to light up the rest of the line. However, even though O-Black and I-White measured 120V, OBlack and IWhite did not reactivate the rest of the circuit. Just the outside jump.

I have to stop you.

You're making a huge assumption that the dead outlets and the live ones must be "part of the same circuit", and that there's a wire in the wall between them, and that the wire is broken. That's not what's happening at all.

So, twisted the Jump wire to the panel/working side and connected to the next outlet. Lights and outlets worked throughout the circuit.

Yeah, because you were backfeeding.

Yeah. All the circuits on one pole are dead.

What's actually happening here is your red pole is dead from the power company. You had no idea what you were doing. What you actually did was connect a hot from a "black" circuit to a hot from a "red" circuit -backfeeding not just that circuit, but the whole "red" bus! Making all of them hot (but in-phase when they're supposed to be out-of-phase, 120V loads don't care). So that dead half of your house lit back up again.

This would fail once you drew more than 15-20A on the red side, because you're backfeeding through 15-20A breakers and they'll trip.

If the power company restored your power, your jumper would be connecting opposite poles, and KABOOM! Dead short, and breakers would trip.

You have too little knowledge. If you want to learn the art, then borrow a book from the library and start reading about home electrical, and then get another, and then hang out here for awhile and read and ask questions. You'll eventually get up to speed. In the meantime, no more playing with electricity, K?

As for half your house being dead, call the power company and report an outage because that's what you have. They'll fix it for free in a few hours typically (or tell you it ain't them, at which point it's electrician time). Remember to roll back all these temporary connections before the power company lights you back up.

If I follow your logic & testing, you have basically bypassed a group of receptacles and have the circuit partially working. It sounds to me like the problem is one of the receptacles.

I suspect your receptacles are wired with one set of wires going "in" and one coming "out". They may be using screw terminals for both sets, in which case you are looking for a wire that is either on a loose screw and barely hanging on or a wire that may even be too tight and is partially broken. Or you may have one set of wires using screws and the other set using "backstabs", which are more prone to problems. It is also possible, though less likely, that you have a bad receptacle causing the problem.

More testing should narrow this down - essentially take apart every receptacle and put it back together using screw terminals tightened properly. If you find any bad wire (e.g., cracked, almost falling apart (which can cause high resistance)) then cut off the bad part and strip the end for a fresh connection.

The ideal solution is to make a pigtail connection for every receptacle. Basically use a wire nut for each pair of wires (black in/out or white in/out) and add a third short piece of matching wire (you can strip some Romex and use the black & white wires) to connect to the screw on the receptacle. This has the big advantage that if you ever have to remove a bad receptacle in the future, the rest of the circuit will still work because it won't be using the receptacle as a splice.

I also highly recommend getting a digital multimeter. They don't cost much and are incredibly useful. Even better is to get a Electrical Test Kit like this: 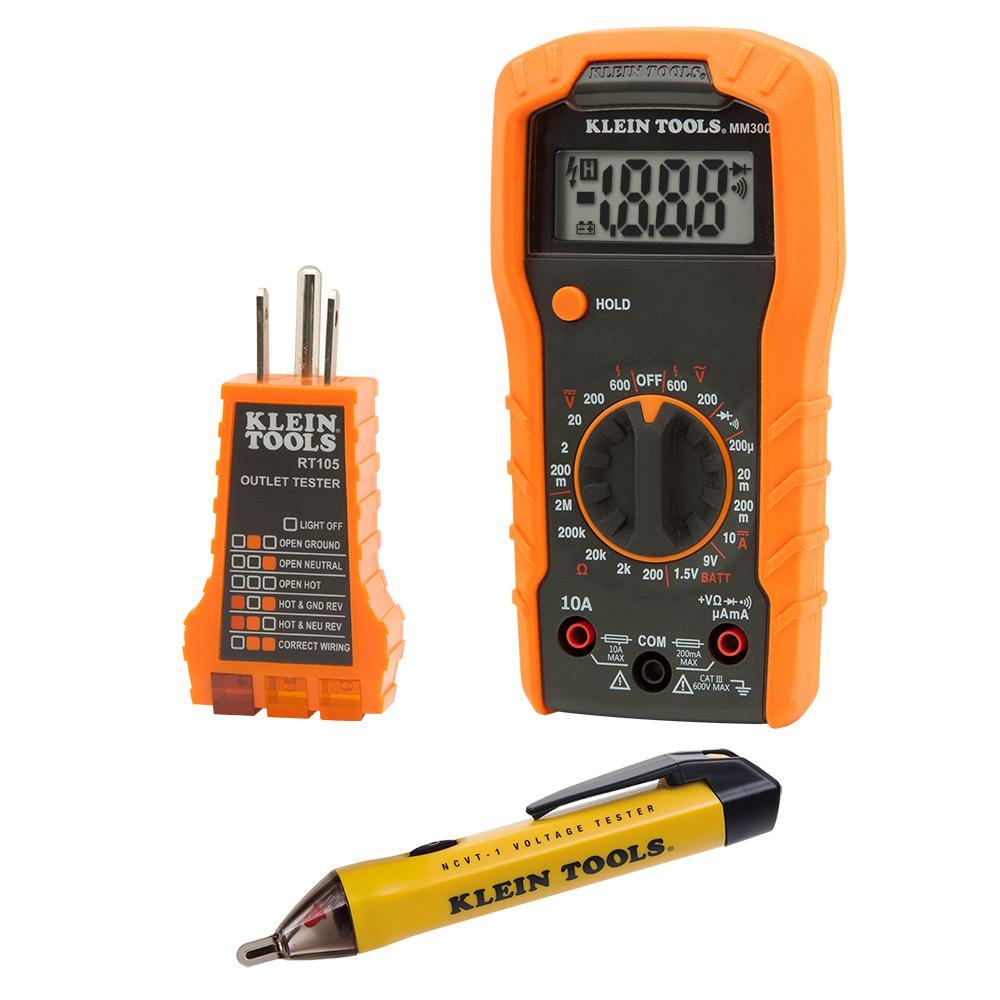 which gives you a basic multimeter, a non-contact tester and a receptacle tester (or magic 8-ball as Harper refers to them), which together can help troubleshoot a lot of issues much easier than with a multimeter (especially an old analog one) alone.

24
What is a tandem breaker (aka duplex, cheater, twin, double-stuff, etc.)?

1
How can I remove the switches that control outlets?
2
Adding an outlet to a light switch, just want to make sure I have the right idea
0
Light switch wiring is confusing me
1
How do I re-wire this outlet (switched top, always-on lower)?
0
Why does the breaker trip after I replaced some outlets?
0
Replacing 4-wire outlet and didn't label the order — does it matter?
2
Switched outlet to unswitched usb
2
Wall plug outlet change
1
Help with hot/neutral outlet - false reading?
2
How to connect one set of wire (+ ground wire) to outlet