How do I re-wire this outlet (switched top, always-on lower)?

I wanted to replace this almond-colored outlet with a white one. Purely cosmetic. So far, huge mistake.

In any case, I took the outlet out, copied the way the old outlet was wired and … blew out my new $50 Wemo light switch.

Now I'm baffled. I checked the wires and can't make heads or tails of it. I'm handy, but no electrician.

I tested each wire with my multimeter—one lead on the wire, one on the ground—with the light switch on (pink) and off (blue). The results: 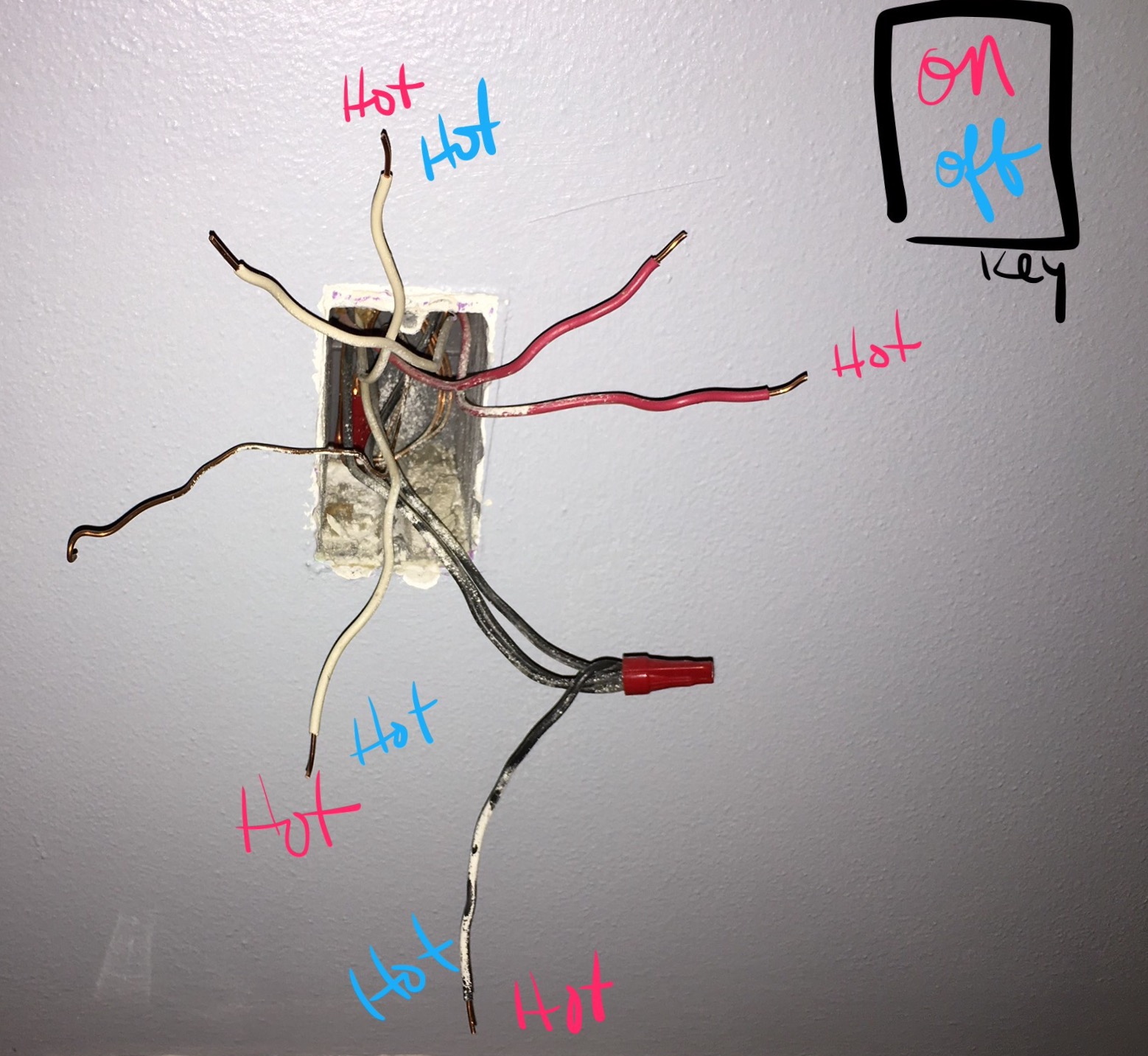 The old outlet was wired with:

I can't for the life of me see how this ever worked. Does this look right to anyone?

This is a lot more straightforward than it looks.

You need to break off the tab on the hot side of your new receptacle.

How do we know this? First, black is the first color people use for always-hot. And they're all nutted together with a pigtail. So that is almost certainly the genuine always-hot. Can't tell you where it's coming from.

Since you have a WeMo light switch, those are neutral, so the white wire on the switch loop must actually be neutral. Therefore the switched-hot is red. Since other receptacles are also switched, that also accounts for the other red wire. Now all the red wires are accounted for.

The supply must deliver neutral, and the switch and downstream outlet also need neutral. That accounts for all the white wires.

By the way, the neutral are hot because they have loads on them. Since you disconnected its neutral and it is still connected to "hot", the entire guts of the Wemo are now floating at 120V, including its neutral terminal and the wire attached to it. The same is true for something you have plugged into one of those receptacles in an always-hot socket. If you put an ammeter between these "hot" neutrals and the connected one, it would tell you what they draw.

The 3-way theory doesn't hold. Since black is always-hot, the other two would have to be messengers. The two messengers would have to go down another cable that is 3 wires, so that could only be the other /3. There would be a lot more wire-nuts in there, and there's be no way for switched hot power to make it to any other receptacle.

The people who wired this were hacks. Using both backstabs and screws because you're too lazy to pigtail is appalling and illegal. It is possible to put 2 wires on/under the same screw, but you need to use products auch as Leviton's screw-and-clamp system, which are designed and listed for that. A commercial grade Leviton receptacle with that system is under $3. Never use screws and backstabs. Never use backstabs in any case.

If you don't want to use the Leviton or competitor system, just pigtail as you see the black was pigtailed. Get some wire nuts and short lengths of wire. You can buy 2 feet of 12/3 cable and cut it apart to get wires.

If I were you I would think about replacing every receptacle in the house. They probably backstabbed a lot of it, very common for builders in a hurry, also using the cheap 60 cent receptacles and switches. At least get rid of the stabs, they are bad news.

You said the hot outlet had two reds on it. They were probalby just making a joint there and going to another box.

So, black is hot, red is switched, white is neutral. One white wire is neutral from the panel, one goes to the switch and one goes on to other receptacles.

Black is always hot, one from the panel, one to the switch, and one on to other receptacles.

Red is switched hot, one back from the switch, and one on to the other receptacles.

Try that and see what happens. Use a standard single pole switch not the fancy $50 one. Just cap off the white in the switch box.

3
How can I convert switched receptacles to half switched receptacles?
4
2 circuits connected in one box?
2
How do I wire this switch/outlet combo?
8
Wall Outlet with three sets of wires!
0
Added sconces to switched outlet run and made the outlets always hot, what do I do with the last outlet?
1
How to make outlet half-hot in this situation?
0
Replacing 4-wire outlet and didn't label the order — does it matter?
1
Can I make a switched outlet which is connected to light hot all the time without running new wire?
1
Turn 6-wire outlet into 2 GFCI outlets
0
Rewiring switched ceiling lights and outlet switched top receptacle to switched ceiling lights and always on outlet