I was wondering if there is an industry standard in terms of what depth to set shower mixer valve blocking at? In your traditional house the wall is only a 2x4 depth, meaning a block of 2x4 would only leave 2" of depth if the back side of the shower mixer wall was drywalled. I have read that the standard plastic ground is supposed to be flush with the finished surface of the shower wall, in my case, tile.

According to these instructions, that makes me have to bump my 2x4 blocking OUT of the 2x4 stud cavity. I have this luxury because that is not a finished wall surface. However, it seems odd - even backwards, and it seems like I would need the block to stick inward instead because I have a thicker wall than a normal precast shower enclosure. I'm going to have 1/2" tile board, the thinset, and 1/4" tile. These numbers don't add up and I am thinking I made a mistake. It's a Delta shower kit, meaning mixer valve, shower head, and trim rings all in one and not something universal.

Different brands and models of shower valves require different wall-depth installation. You should always follow the installation instructions that came with the valve assembly.

Most valves come with a temporary plastic or cardboard "plate" that illustrates the location of the finished wall surface in relation to the valve-body installation depth. If you do not have that "template" anymore, you can often estimate depth by assembling the trim to the valve and measuring from where the wall surface would be to the mounting holes. You need to locate the supply piping according to final installation depth of the valve, not the other way 'round (not an issue with flexible supply tube like PEX).

Except for special application products, they are made to fit a standard wood-frame wall but may not allow the use of 2 x 4 lumber as a mounting support; in fact, some recommend use of a manufacturer-specific mounting strap/stringer. 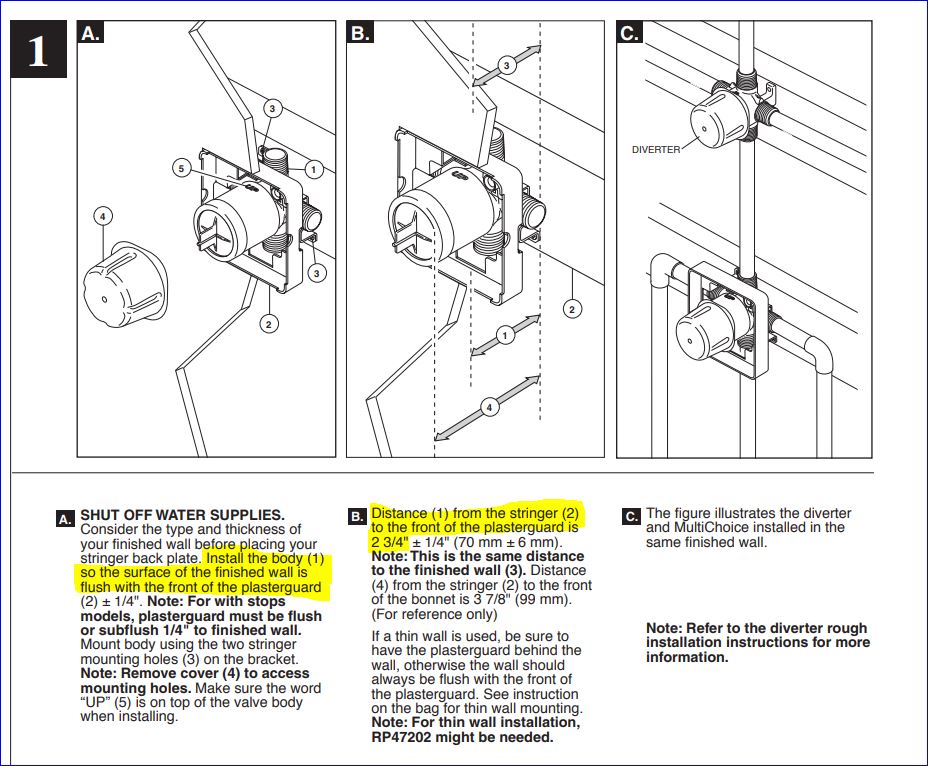 I have installed many. in thick wall install , plaster guard should be and exercise of looking at the trim kit to see how far the handle will protrude from the wall and how much of the center cover is showing. for my Delta installs with 1/2" Travertine i recess 3/8" back . I dont use a full 2x4 stringer. this will accommodate a delta trim later or an after market Danco with a long stem and handle that stick out into shower area. I have recessed deeper so that plaster guard is 1/2" behind flush with tile. years later on that on , i had trouble attaching the handle when changing out trim. I got it on there, it was just a steep angle for the Allan screw.

If the hole is sized correctly to allow servicing you may be able to unscrew the fasteners from the body of the mixing valve, pull it forward an inch and place backing behind it, then refasten it.