How to address diverter pipe length issue during shower remodel?

I am in the early stages of replacing my bathtub and re-tiling the surrounding walls. During demolition, I discovered that the home-builder used 2 layers of wallboard for the original tiled shower surround: the deepest layer is just normal sheetrock that you'd find anywhere else in the house, and the outer layer is the green-papered variant that you'd hope to see used for a shower installation.

My best guess as to why there are two layers is the depth of the existing bullnose tile pieces; they appear to be designed to wrap around the edge of the greenboard. And, in fact that is exactly what the contractor did.

I think that means that the person who installed the plumbing positioned the valve body (and sized the diverter pipe) with the expectation of there being two layers of wallboard. But my new tile selection does not use deep bullnose end pieces. Consequently, I think that now if I were to just use one layer of Hardiebacker or Densshield in my remodel, as I had planned, that I would end up with a larger space between the back of my valve knob & the escutcheon (which might not be so bad,) and also a gap between my downspout/diverter and the new tile (which would look ugly, and allow water to get inside the wall).

For the diverter pipe, I guess I have the option of having someone sweat the male threads off the end, and cut off a piece equal in length to the width of (greenboard + sheetrock - densshield). Should I do that, or just duplicate the use of two layers of wallboard? (Note that my new tile will have flat bullnose trim, so if I did two layers, I'd have to extend the outer layer all the way to the exterior corner (not shown) and also all the way to the ceiling.)

Note that the bent diverter pipe is soldered in to the valve body. 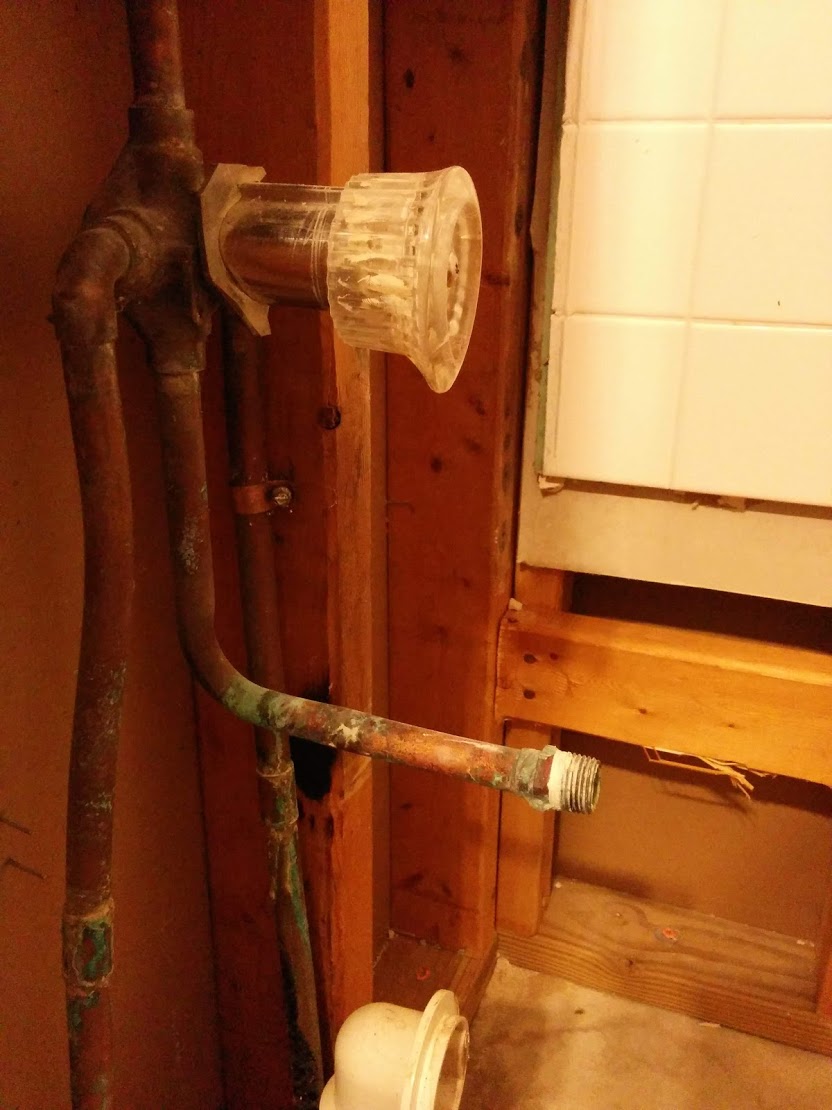 Adjusting the length of the tub spout pipe will be way easier than changing your entire shower enclosure and tile plan.

The method you use when you shorten the pipe (and how much you shorten it) will depend on the type of tub spout you will install (different spouts have different pipe-attachment arrangements, not all of them thread on like your old one did) and where your finished wall surface ends up being.

I highly recommend that you do not cut the spout pipe until you are done tiling, so you can ensure the proper pipe length.

P.S.- some spouts just slide on and use a gasket to seal; they are more forgiving when it comes to pipe length: 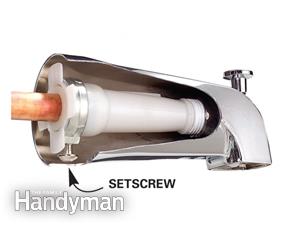 1
How to finish tiling an outside edge for a shower?
1
how to setup bathtub spout and shower head in separate locations
2
Pipe length confusions when replacing tub/shower diverter
0
Identify this shower diverter valve
1
Abrasion on shower head pipe -- must replace?
4
Waterproofing shower help
0
tee diverter / valve to my shower
0
What is this kind of shower diverter called?
0
Where to apply liquid membrane at a tile/drywall ceiling edge in a shower?
0
How difficult is it to replace this tub diverter valve?