Apologies if this is a stupid question, but I can't figure out a simple wiring setup. I have two simple switches controlling two separate lights, all on the same circuit, all in one electrical box.

There are three cables coming into the box. Left to right: First cable is WHITE & BLACK wires. Second is WHITE, BLACK, RED. Third is WHITE, BLACK. First two cables' black is joined together in a wire nut and then pigtailed into both switches (wirenut crimps 4 wires total). Red wire goes into switch one. All white wires are crimped together and are not connected to any switch.

See diagram below (note - I colored white wires in yellow so they could be seen on the drawing). Ground wires not shown. 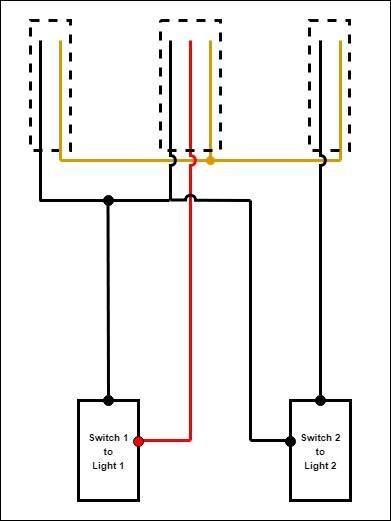 My guess is that

So far run of the mill light switch setup, except for... WHAT IS THE BLACK WIRE IN THE MIDDLE CABLE? I would have expected the middle cable to only have two wires, with red wire being colored black.

My question is - do my assumption 1-3 look good to you guys, and 2) what is this third wire in middle cable that's connected to what I believe is HOT/LINE directly? Can recess lights be wired with LINE, SWITCH LEG, NEUTRAL?

9
Is it normal to have a light switch setup using only the hot wire?
1
Wiring Bathroom Fan Switch
4
How do I replace a single pole light switch with a programmable timer switch?
2
Wiring a ceiling fan and light switch with two three-cable wires
2
Help wiring timed fan switch
1
How is this 3-way switch circuit wired?
1
Wiring multifunction fixture to 2 switches, 2-wire cables
1
What could this red switch be for possibly
2
Can someone explain this wiring configuration to me?