I'm trying to wire a new single pole dimmer (two black wires, one ground) and single pole switch (no wires, just screws) for the fan in my bathroom. What I see coming into the box is three separate two-wire cables (black,white,ground).

Currently in the box, all the whites are tied together, and all the grounds are tied together to one lead. The previous set up was 2 switches: a switch/receptacle combo for the fan light and a single pole switch for the fan. Two of the black wires went into combo switch, and one went into the other switch. The combo switch had a white wire connected to the white wire nut.

Now that I'm taking the receptacle out of the equation, how do I wire my new setup? I assume each of my new switches gets a black wire and a ground wire, but what am I doing with these neutrals?

I'm sure I'm leaving out important info, so ask away. Thanks for your help and patience.

No way from here to know which wire fed the light or fan, but you have a continuous hot feed into the box that fed the receptacle, light and fan. The third wire, maybe it fed the fan or maybe something something else farther down the line, if the latter that needs to be tied in 100 percent to the hot feed. All whites still tied together, blacks to the dimmer from the light and hot. All grounds tied together set with a screw to the metal box. Securing the ground to the box is not needed if the box is plastic.

Before I got too wordy, here is a sketch 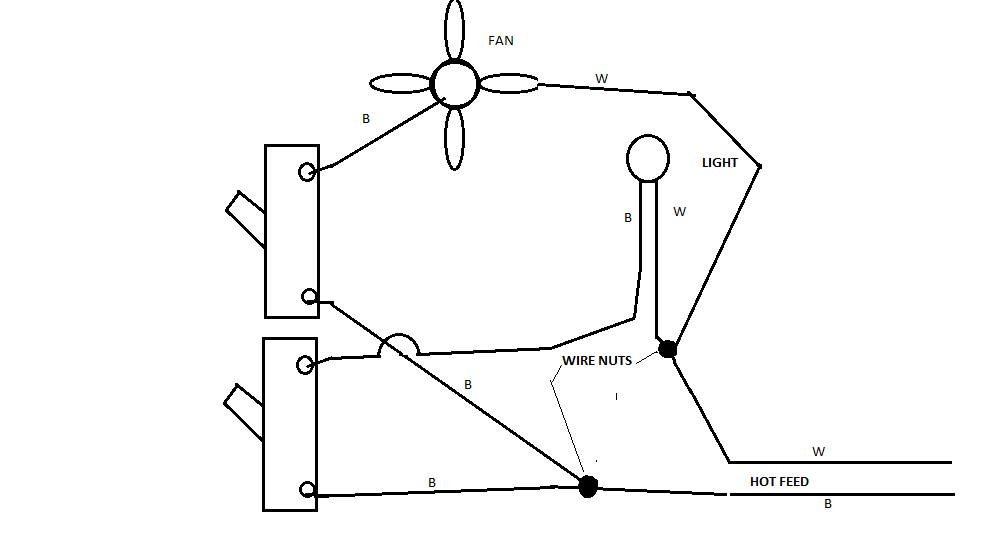 Still have to learn to format better

The sketch is a little rough, it should get the idea across I hope

So, you have the logical and correct number of wires for your project - one power feed, one light, one fan.

The power feed (which you can identify in various ways - I'm fond of a voltmeter but in your case, if you don't have one, if you didn't keep track of which wires went where, you can connect two black wires together with a wirenut, turn the breaker on, and see what turns on - keep track of the wires and repeat - when nothing turns on, the wire that's not connected is the feed) needs to go to the hot (also known as line, supply, feed, etc.) side of the dimmer and the switch. The other black wires, correctly identified by wire-nutting to the hot feed and turning the circuit on briefly so you know which one is the fan and which one is the light, connect to the load terminals of the dimmer and switch.

The outlet/switch needed a white wire - the dimmer, not having an outlet, does not - so just leave the white wires all together (or remove the stubby one that went to the combo switch, if it's still there) - they are not normally connected to switches, except in the now deprecated "switch loop" configuration (where the black is the power feed and the white on just that piece of wire is the hot from the switch to the lights)

Your original description does raise a question - the "other switch" should have had a second black wire providing it with power (one black wire going to it would be the fan, but there had to be something feeding power to it from the feed wire.)

Not the answer you're looking for? Browse other questions tagged electrical wiring bathroom fans or ask your own question.

6
How can I rewire my bathroom fan, light, and receptacle?
5
Can I replace an old exhaust fan and connect it to an existing light switch?