How should I connect a Wink relay when two circuits are involved?

I'm installing a Wink relay that has two switches for lights. The double gang box I want to install it in also has two switches that are operating lights only. My problem is that each light is on a different circuit breaker.

The Wink relay has only one line in and two loads out. Can I switch one of the lights to the other's circuit and leave a hot line in the box with a wire nut?

It is always safe to leave a hot wire capped off with a wire nut. However (as Harper says), you must also disconnect and cap off the corresponding neutral wire.

Find and remove the wire nut connecting the neutral that you want to discontinue. Having separated the wires, cap off the one leading to the circuit breaker. Connect the one from the light to the neutral wire nut that will remain in use. 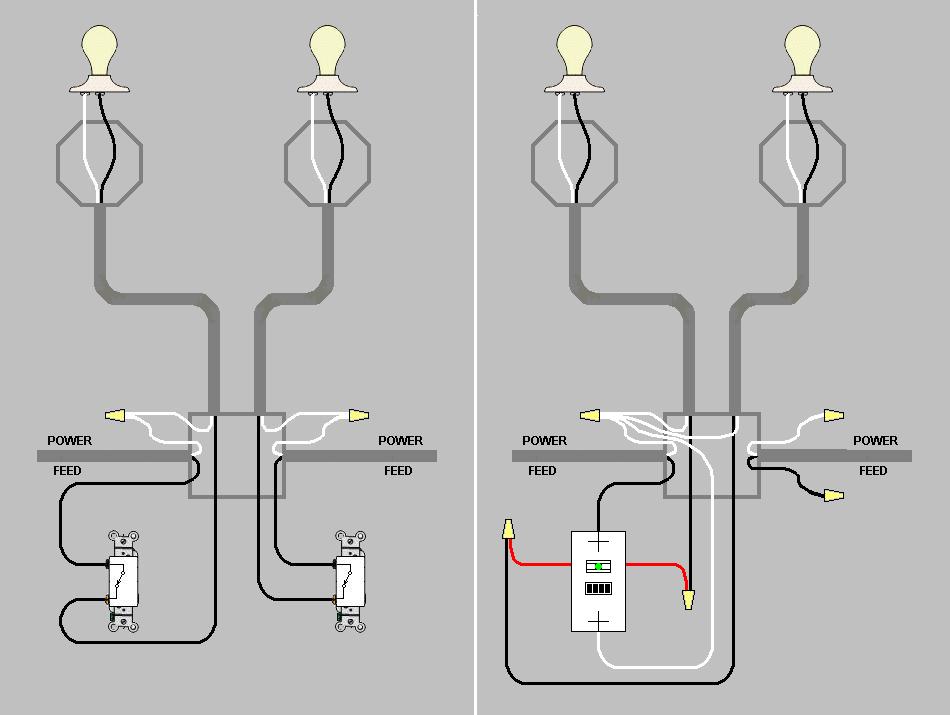 You should add up the total loads on each of the two circuit breakers, and power the switch from the one with the lighter load. The illustration assumes that the power feed on the right was from the more heavily loaded breaker.

You might consider leaving a label "no longer needed" taped to the wires, but that is not required, and any future maintainer who sees the two loads and the double gang box will not be horribly confused by what you did.

Not the answer you're looking for?Browse other questions tagged electrical wiring or ask your own question.

6
What's the best way to label a double gang box with two circuits
2
Is it safe to have two circuits passing through one junction box?
1
Wiring timer switch into 2-gang switch setup with common load (red) with downstream load
0
Installing smart switch that needs a neutral wire without a neutral wire
0
Arc Fault Breaker trips when 2 specific lights are turned on
2
Questions about re-purposing double gang electrical box with two circuits
1
Why would my two-pole arc-fault breaker trip when motors are used on other circuits?
0
converting two lights from two switches to two lights from one switch
0
How to handle branch circuits cleanly when there are lots of branches
2
Can two circuits with dual function breakers share a box?