(NOTE: I understand I could have eliminated the junction box and daisy-chained the GFCI’s to downstream standard receptacles, but I didn’t because I’m feeding the 4x4x2 metal boxes through a single rear-hole and I didn’t have 12/3 Romex to run a MWBC and couldn’t evacuate another pair of Romex 12/2 from each box. The junction box also happens to be located between the two receptacle boxes which are in different opposite directions.)

Question 1: Even though these are two distinct circuits, can I use a “2-Pole Breaker” to power the “HOT” conductors for each circuit such that opening the one breaker removes power at both receptacles in each box?
———————

In the (4x4x2) junction box, I intend to make the following connections:

Question 2: My Grounding Wire Nut connector is rated for 5 #12 wires but I need to join 6. Can I use a greenie to reduce 3 wires from Circuit A to one wire, and another greenie to join the one reduction wire to the remaining 3 wires from Circuit B, and then connect to the chassis? Or get a bigger wire nut that doesn’t have the hole in it and do a pigtail to chassis (7 #12’s)? 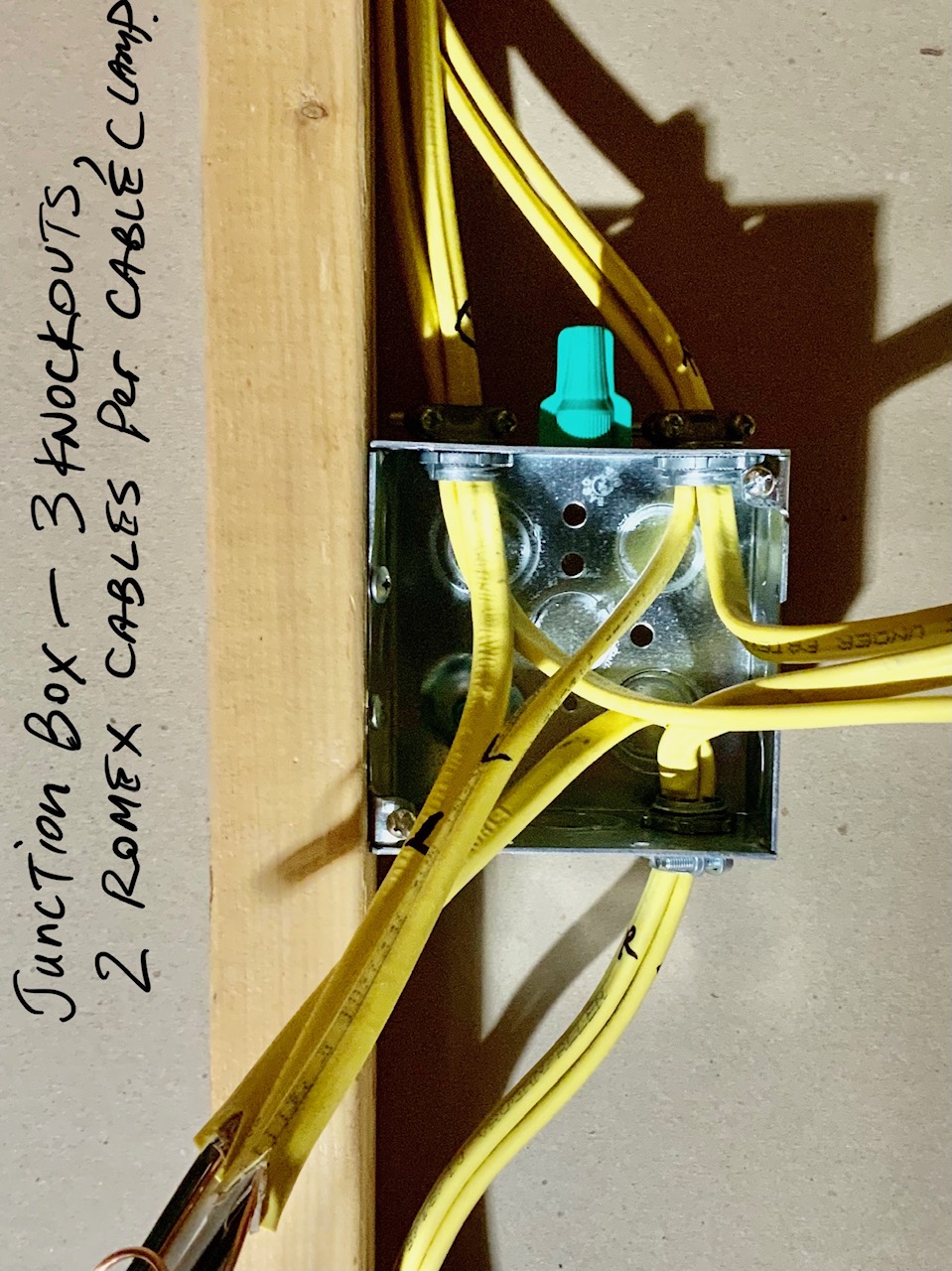 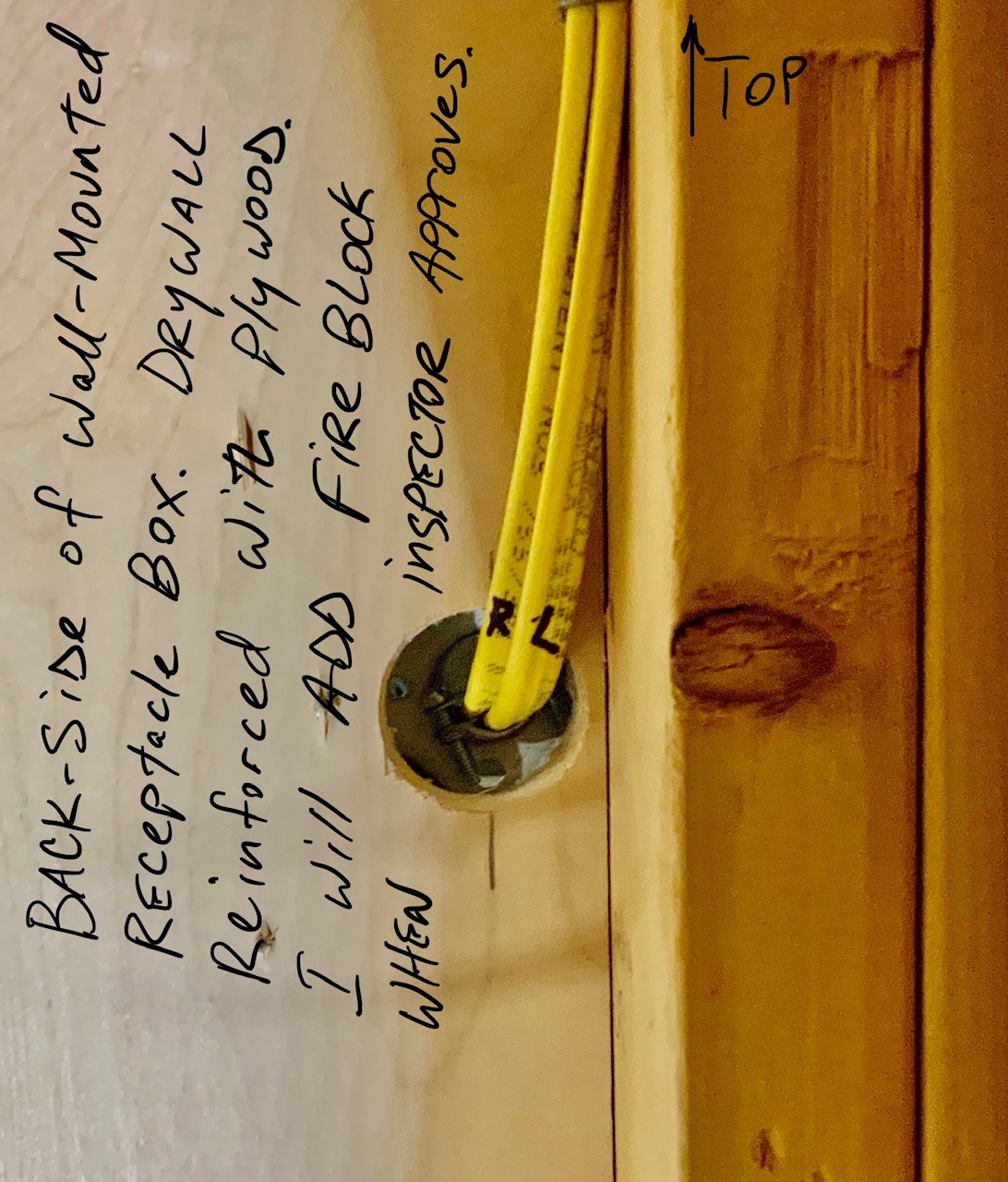 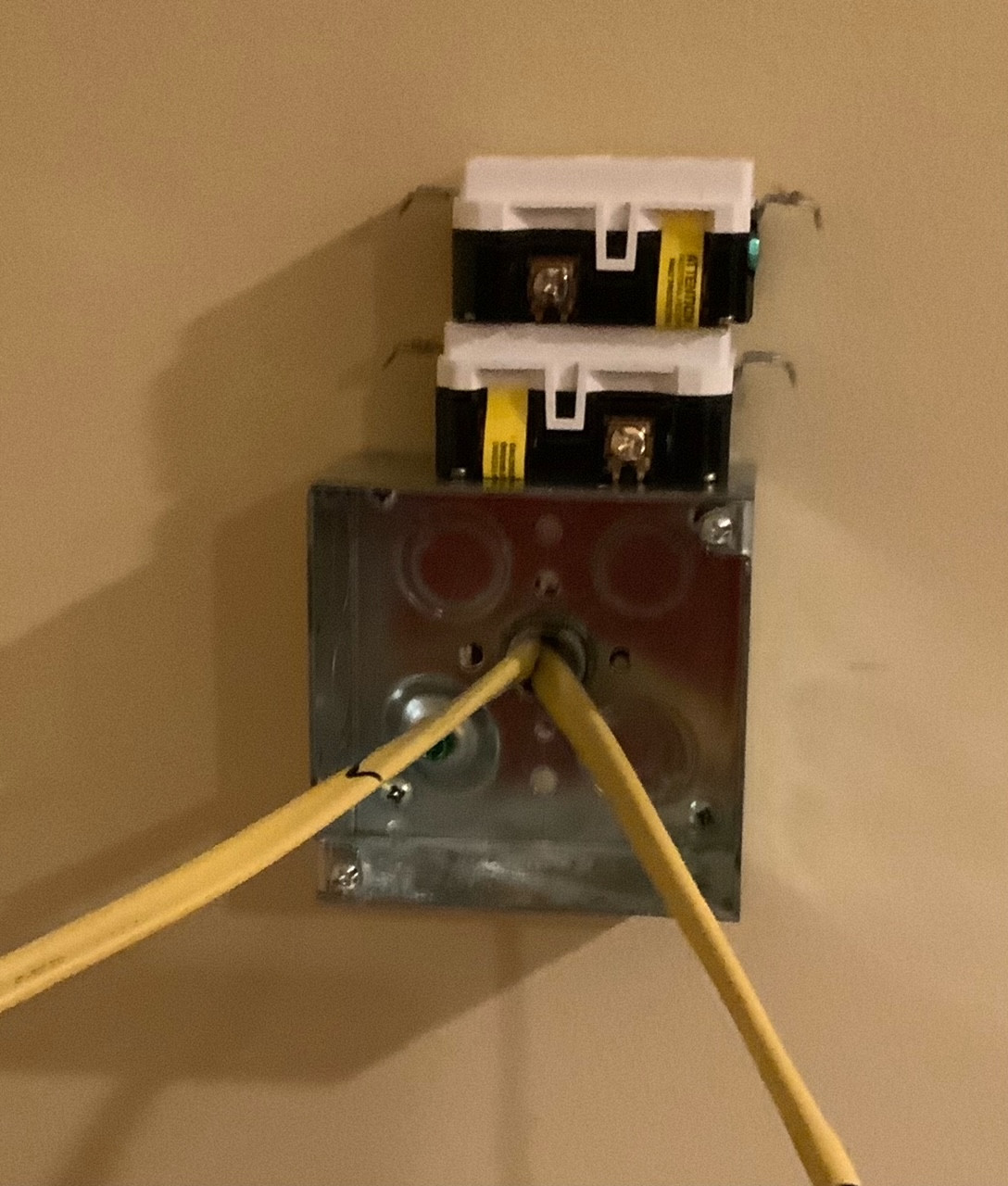 I now realize you're bring six 12/2 cables into the box. And also having 2 GFCI receps there. Aside from the GFCI-crowd problem, which you will find heinous, you also have a statutory (by the law) over-fill problem. That is far too much for a 4x4 box. Let's crunch the numbers.

The ground wires go to the metal box first!

That means all cable grounds must go to the box. You are trying to wire them to the receps and ignore the box, and that's wrong.

So you must - always with metal boxes - you must get a #10-32 screw and put it in the pre-tapped hole made specifically for grounding. You then pigtail off of that.

"But that's now 7 wires I have to get on a nut!" Not quite. There are several ways for receptacles to take ground from the box. With switches, it's automatic!

Or, feel free to drill more holes and use self-tapping screws, as long as they are -32 thread pitch or finer. You can have as many ground screws as you want, just don't put them on knockouts!

In many cases the receptacles do not need a ground wire. They can pick up ground several ways:

Use gray tape to distinguish the neutrals.

Here's the trick. In cables, white wires can be remarked to be hot, but that is the only remarking allowed (can't do black to neutral) until you get to #4 wire size. So...

The metal boxes must have proper cable clamps

I thought I heard you say you were feeding all 4 cables through a knockout. I could see where four 12/2 Romex could be crammed through a 3/4" knockout, but not legally. Every Romex cable entering the box needs to do so at a listed cable clamp, whose purpose is to prevent the wire from taking damage from the sharp box edge.

Don't use LOAD unless you are meaning to protect onward outlets.Almost every GFCI (except the dangerous Chinese cheapies sold on Amazon) will support 2 wires under the Line screws via the "screw-and-clamp" back-wire technique.

Yeah, go for it. Obviously the common trip functionality is unneeded and might be annoying, but there's no harm at all in this.

Yes, you can handle large numbers of wires on a nut by "daisy chaining" 2 nuts with a pigtail in between. Remember the stuff I said up top about "Ground the box FIRST" so for instance have the box pigtail run through a Greenie where it picks up the 4 cable grounds, and then goes onward to a regular nut where it picks up the recep grounds (if those are even needed... if you have self-grounding receps or flush contact, don't even worry about that).

Yes you can use a 2p breaker for individual circuits (the neutrals must remain separate), and you can daisy chain wire connectors in order to connect all grounds.

Note that you may not have realized but the safety ground wire in 12-2 Romex is sometimes a smaller AWG than 12. In situations where this is allowed by code it may be a 14AWG bare copper wire.

Knowing this you can re-check the wire nut capacity for more conductors.

Not the answer you're looking for? Browse other questions tagged electrical junction-box 120-240v or ask your own question.

3
Three-way switches to control top outlet of multiple receptacles
1
Electrical wiring/grounding - continuity via metal junction box?
0
Can I install 2 30 amp twist lock receptacles in a 2 gang box on 1 circuit?
2
What are the consequences of connecting hot or neutral wires of cables from two different circuits together in a junction box?
1
Using Greenie grounding connectors
4
Moving electrical outlet 3 feet to the left
2
Can two circuits with dual function breakers share a box?
1
How to determine electrical box size per NEC
1
Diagnosing connected circuits; dangerous?