I'm replacing an duplex outlet in our kitchen and when I removed the outlet, I uncovered some surprises that have me baffled and concerned. There are two cables entering the box, one with three conductors plus ground, the other other with two conductors. Here's a crude diagram, with measured voltages: 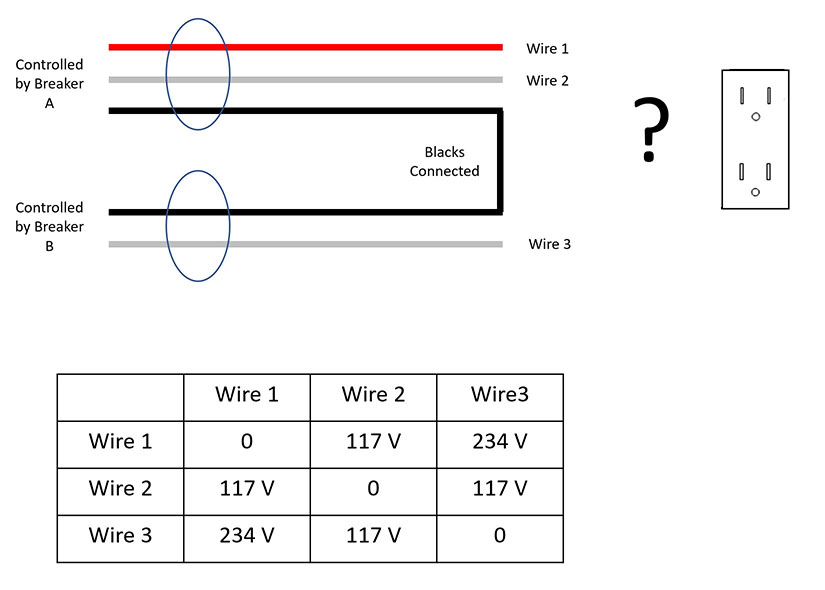 All three wires were connected to the outlet via backstab terminals, but I wasn't smart enough to take note of which wire went where.

In a lot of ways, this looks to be wired like a split outlet, with one separate phase going to each plug. In that case, wire 2 (white) would be the common wire for both outlets, with Wire 1 and Wire 3 beings the two hot wires from different phases. BUT the original outlet is not split - both tabs are in place and a check with my DMM shows continuity between the respective plugs. So how this was wired is a total mystery.

One or both of these circuits also seem to connect downstream to a built in microwave which is no longer functional with the outlet removed, regardless of which breaker I throw. I really wish I'd taken a photo of the existing outlet with wiring intact before I removed it, but I didn't. Can anyone help me figure how this was wired?

Depending on the year built this could have been a totally coda compliant multi wire branch circuit. The red being 1 leg and the black being a second leg with the white neutral common to both circuits. In the past the breakers did not require handle ties for the last few code cycles this has been a requirement. Some electricians will split the hot tab on an outlet and wire the top outlet in kitchens with 1 leg and the bottom on the second . others would wire every other outlet with 1. Then the other on the next. All of this was up to code and before the late 70's gfci's were not required. Installing GFCI'S on multi wire branch circuit can be problematic.

You have a multi-wire branch circuit (MWBC)

In this arrangement, the two hot wires are on opposite poles (VERY important) and they share a neutral. Two code requirements come out of that.

Neutrals must be pigtailed: removing a device (like that receptacle) must not sever the neutral for the other half of the MWBC. The way the last guy used the two (non-broken) neutral screws to splice the neutral violated that rule.

Both breakers in an MWBC must be handle-tied, so they have common maintenance shut-off. You must make the breakers adjacent, then either join them with a handle tie, or replace them with a 2-pole breaker.

It may help to disconnect and abandon any wiring you are not using. It is abandoned if you disconnect wires at both ends and cap them off.

New work would require GFCI protection in the kitchen. To protect a MWBC, use a 2-pole GFCI breaker. Expensive, but possbly cheaper and definitely simpler than fitting GFCI receptacles on a MWBC.

Not the answer you're looking for? Browse other questions tagged electrical wiring kitchens or ask your own question.

3
How can I convert switched receptacles to half switched receptacles?
9
Why am I getting shocked by a water heater?
1
outlet intended for half hot does not have tab removed
1
2 neutral wires to one connector
1
How do I re-wire this outlet (switched top, always-on lower)?
0
Double-pole breaker connected to two receptacles/outlets on same column/post
3
Did not remove break off tab on electrical outlets replaced
4
Need help wiring two lights from a switch at the end
4
Outlet Relocation and wiring
5
Two opposite phase circuits in one conduit… do i need 2 neutrals or an oversized neutral?